Why the Atlantic 10 gets it

07/30/12
4:51
PM ET
LAKE BUENA VISTA, Fla. -- After Temple decided to bolt for the Big East, coach Fran Dunphy never even considered the possibility that the Owls wouldn't be allowed to play in the 2013 Atlantic 10 tournament.

And why would he? That's not the way the A-10 operates. The league wanted no part of being bitter and vindictive, especially toward one of its most recognizable and successful programs. 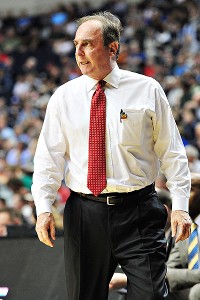 "I never thought about it,'' Dunphy said as he watched a recent AAU game at ESPN's Wide World of Sports Complex. "There are a lot of bittersweet feelings from the Temple point of view. I hope we've been great members of the Atlantic 10 over the years. In my six years, it has been a fabulous basketball conference and this year could be off the charts with as many good teams as there are.''

Why will there be so many good teams? Partly because of the bitterness emanating from the Horizon League and Colonial Athletic Association toward its most recognizable and successful programs, Butler and VCU.

Apologists for both leagues will argue that there are bylaws that clearly state if a school announces its future departure, it can't play in a championship. The America East is doing the same to Boston University, which is bound for the Patriot League but will be stuck with one final lame-duck season before departing. Same goes for Old Dominion (C-USA) and Georgia State (Sun Belt) in the CAA.

The presidents in those respective leagues easily could have voted to put grudges aside and be grown-ups. Instead, they acted like scorned children who didn't get their way and won't have their best teams represent them in the NCAA tournament.

The A-10, meanwhile, was ready to pounce once Temple and Charlotte made football moves for their own perceived athletic department survival. The Owls football team, once tossed aside by the Big East and eventually forced to prove itself again in the MAC, was invited back for the 2012 season to replace West Virginia. Charlotte started its football program up and found a home in a desperate C-USA looking for new members after the Big East's raid of Memphis, UCF, Houston and SMU.

Atlantic 10 commissioner Bernadette McGlade couldn't believe Butler and VCU would be available so soon, but with the backing of the A-10 presidents, she led a charge for early entry once those programs were officially banned from their league postseasons.

McGlade said the A-10 CEOs had developed a plan in November 2010 to solidify membership in the event of realignment. The September 2011 move of Pitt and Syracuse from the Big East to the ACC forced the A-10 into a proactive posture. That's when the league sought out Butler and VCU as possibilities (along with Old Dominion and George Mason).

McGlade gobbled up the two recent Final Four teams for the 2013-14 season. When they were possibly available for the 2012-13 season, there was no question that the A-10's welcoming policy of not booting out Temple and Charlotte a year early was going to be enticing.

McGlade had already led the charge to move the A-10 tournament from the dormant atmosphere of Atlantic City to the suddenly vibrant Brooklyn neighborhood where the new Barclays Center was being built. And she had already taken a bit of flak privately from the old guard at the A-10 offices for the questionable move of the conference office to southern Virginia instead of leaving it in more centralized Philadelphia.

But no one seems to be questioning the Atlantic 10 now.

Two programs that have produced three Final Four appearances in the past three seasons have been added. The league tournament moved to a media center and a trendy new spot at Barclays that might rival the Big East tournament in 2013 with the possibility of at least a half-dozen NCAA tournament bids at stake (Saint Louis, Butler, VCU, Temple, Xavier, UMass and St. Joe's, along with a few sleepers).

The Owls will no doubt be in the mix in March -- and for that, Dunphy is grateful.

"I never thought anyone would say to us, 'By the way, you're not allowed to be in the conference tournament.' And it didn't happen and I appreciate that stance from the Atlantic 10,'' Dunphy said.

"Would we have then sped up going to the Big East like our football team this year? I don't know."

The answer to Dunphy's question is probably yes. And that ultimately would have hurt the A-10.

The conference wasn't about to waste an opportunity of having a record amount of bids, even if one of them is from a departing member. And so what if it is? Temple will still be representing the A-10, not the Big East, if it earns a bid.

"I hope we're one of them,'' Dunphy said. "This will be a great challenge for us. But we're really excited.''

How about that? A coach that can't wait for the season, in a conference that is treating it with respect before it departs.

Bravo to the grown-ups in the room. The A-10 gets it. Too bad the other conferences do not.

Why not live in the moment rather than constantly worrying about the future? This is about games and who gets to play in them. Nothing more. Nothing less.

The Atlantic 10 understood that. The CAA and Horizon did not -- and the consequence is that both leagues will slip off the main grid this season, while the A-10 surges way ahead.