Basketball should be Big East priority

But he was better served to be an in-the-trenches No. 2, especially at a time when conference commissioners have consolidated power to an all-time high in college sports.

Marinatto didn't have a demonstrative personality and was the least known of the power six commissioners. He didn't command a room or have the persona of the other five. 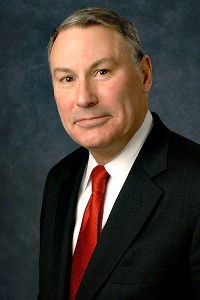 John P. Filo/CBSThose who know new Big East commissioner Mike Aresco say that the league has a leader who is a top-notch communicator.

New Big East commissioner Mike Aresco has a chance to do that for the Big East at a time when the conference needs to be noticed more than ever.

The former CBS and ESPN executive has plenty of contacts in the NCAA and knows the other commissioners of the power six quite well. That may not matter in attempting to get the Big East a seat at the adult table in football.

Where Aresco can do his most important work is to ensure that basketball is king.

The most money to be made in college sports is in football, but the Big East has to continue to establish its identity as the top basketball conference in the country.

Losing Syracuse, Pitt and West Virginia is a major hit that may not ever be totally overcome, but Aresco has a chance to dictate how this league moves forward.

The league still has recognizable basketball powers in Louisville, Connecticut and Georgetown. Marquette is a traditional NCAA team, as is Notre Dame. Cincinnati has re-emerged. Villanova and St. John's have the history to always be in the mix. And South Florida has suddenly become a player.

The additions of Memphis and Temple strengthened the league as well as any available teams on the market once Pitt and Syracuse left.

Aresco said all the right things Wednesday on a conference call. He promoted the Big East but made it clear that he expects to be in the room for major decisions with the other power conference commissioners.

His first chore is to secure a new television contract. The Big East under Marinatto rejected a $1 billion offer from ESPN.

Aresco said he wants to seek the proper exposure and ensure that the Big East is on a number of platforms. The Mountain West coaches often speak about the mistake the MWC made by going exclusively to MTN/Comcast. Games were hard to find and the lack of exposure definitely hurt the conference.

Bill Streicher/Icon SMIThe Big East must decide how it's going to operate as an 18-team league in 2013-14.

Aresco can't make the same mistake. Yes, I work for ESPN. No, I have nothing to do with the negotiations. It doesn't affect me one way or another if ESPN has the Big East on its platforms. But the conference needs to make sure it is on as many networks as possible (NBC, CBS, ESPN, Fox) to ensure its national appeal. Going exclusive to one doesn't serve the expansive membership.

The Big East will be in a unique situation, with 18 members in all sports except football and Boise State and San Diego State playing football only.

Aresco can't keep everyone happy, but he can cast a wide net for the league's members by putting the Big East on various platforms. The league is too spread out to go exclusive, considering some of the regional networks aren't available on every cable package.

Aresco said the basketball and football schools want to stay together. That's true, for now. The basketball schools can't be separated from Louisville and Connecticut, and those two can't be apart from the major media markets in men's basketball. If Louisville were to get an invite from the Big 12 and UConn to the ACC, the dynamics change -- but there is no indication that is going to occur.

The Big East must decide how it's going to operate as an 18-team league in 2013-14. Will it be one division? Two? How will the rivalries be protected? Aresco said he will review the options and make a recommendation to the Big East presidents.

That's what has to happen. He has to be decisive.

Once again, Aresco had the right answers, knowing full well as a television executive that he has to protect the best games. He said no decision has been made yet on any of those issues, but they will likely be folded within the television negotiations. TV partners will want to know how many times they can get games like Georgetown-Louisville or St. John's-Connecticut.

Aresco said having so many schools works for the Big East. But it's probably the only conference where this could occur. There doesn't appear to be any interest for the SEC, Pac-12, ACC, Big Ten or Big 12 to go to 18 schools, let alone 16.

There is no way Aresco can keep everyone on the same page in the Big East, but he must make the attempt by getting the best deal possible in the television negotiations, working with the most networks available and ensuring that rivalries will stay intact or develop (Memphis-Louisville).

There were other candidates for commissioner, but the selection had to be well known in college sports. Now there's a chance the Big East will stay relevant with a person in charge who isn't afraid to make a stand and command a room.

The Pac-12 did so with Larry Scott, going outside the norm of a college administrator for the position. The Big East has done the same with Aresco.

Different can be a wonderful new path to success. The Big East had a decent pulse before this move; now it has a chance to be healthy -- as long as it takes care of basketball.