NC State freshman Rodney Purvis asks the same question to the Wolfpack coaching staff each day: "Have you heard anything yet?"

Purvis was cleared to take classes at NC State while the NCAA Eligibility Center reviews his transcript from Upper Room Christian Academy in Raleigh, N.C.

The Wolfpack sent in another appeal Thursday. And now they wait -- again. 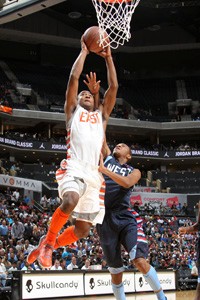 Kelly KlineMcDonald's All-American Rodney Purvis is still in limbo at NC State as the NCAA Eligibility Center reviews his transcript from Upper Room Christian Academy in Raleigh, N.C.
"Hopefully it's going to be done next week, and he'll be eligible to play,'' NC State coach Mark Gottfried said. "That's the right thing to do and the right thing to do in this particular case.''

At issue is whether or not the high school has the correct correlated core classes.

"He's a great kid and a great student,'' Gottfried said.

Purvis isn't a must for the Wolfpack to win the ACC. Last season's Sweet 16 team remains mostly intact. But not having Purvis on the trip to Europe in August showed one thing: "We're a guy short,'' Gottfried said. "We only have nine scholarship guys with Rodney, and then without him we're down to eight.''

So we posed these five questions to Gottfried as he and the Wolfpack wait to hear official word on their McDonald's All-American:

What has this been like for the staff and Purvis?

"No fun. Imagine him walking around classes every day and not knowing the outcome,'' Gottfried said. "Plus, you've got a kid who went to one school the entire career. He has a 3.0 GPA, and he's sitting here with uncertainty. You can't imagine how hard it is for him.''

What has the school been doing during this appeal process?

"We've been working with the high school for months now, and the NCAA and all three of us are working on it. We're trying to find out exactly what they wanted and what additional information they need for each course,'' Gottfried said. "It's been a lot of hours. I can't even begin to add them up.''

What happens if the latest appeal is denied?

"The school will continue to [try to] prove that the classes were college prep classes, and that could get done three weeks from now or anytime,'' Gottfried said. "If there is new information, then it could get revisited if he wasn't cleared to play.''

What has been Purvis' attitude?

"He's been great in workouts and has a great attitude,'' Gottfried said. "He's a normal college student. He's prepared. That's why it's frustrating for us and for him. It's been a tough ordeal for him, and he's handled it with great class.''

Who would play in his place if Purvis is ruled ineligible?

Warren is a 6-7 freshman from Durham, N.C., and is three inches taller than Purvis. The Wolfpack return the key members of the Sweet 16 team in C.J. Leslie, Lorenzo Brown, Richard Howell and Scott Wood.