09/18/12
7:52
PM ET
Notre Dame is expecting to play in the Big East the next two seasons, but whenever the Fighting Irish do join the ACC, coach Mike Brey is ready to completely change his nonconference schedule.

Brey said Notre Dame athletic director Jack Swarbrick told the school's coaches to prepare for two more seasons -- including this one -- in the Big East. That would mean shaving one season off the 27-month requirement under the Big East bylaws. (Of course, if the Irish pay more than the required $5 million exit fee, then everything is seemingly on the table.)

As soon as Brey heard the plan from Swarbrick, he met with his staff over the weekend and let them know what he wants to do in 2014 and beyond.

Brey wants to play the Big East's Catholic-based institutions, especially long-standing rivals Marquette and DePaul, in nonconference home-and-home series. Brey said he would like to add Villanova, St. John's and possibly Georgetown into the rotation of schools the Irish want to play. Brey said he wants to play at least two to three of those five schools every season. 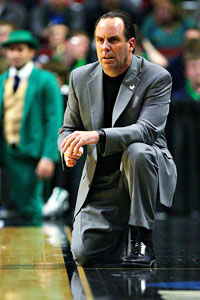 Dennis Wierzbicki/US PresswireMike Brey wants to retain many of the rivalries the Irish have built in the Big East.

Remember, the Irish -- in addition to an 18-game league schedule -- will also have the ACC/Big Ten Challenge and the Crossroads Classic to schedule around. In the 15-team ACC, the conference is expected to take the top 12 teams in the RPI from the previous year to face off with the Big Ten in the Challenge. At the Crossroads in Indy, the Irish have signed up for two more years in the event that includes Notre Dame, Butler, Indiana and Purdue.

Brey said he wants to keep the Crossroads going since it was a hit in Indiana, was cost-effective for the Irish with a bus trip and was a "great money-maker for us."

"We have had calls from Kansas, UCLA, Arizona and others," Brey said, "but I want us committed to doing these [Big East Catholic schools, Crossroads, ACC-Big Ten]."

Brey said he is hopeful the Irish aren't leaving on poor terms in the Big East and would be stunned if the conference's like-minded institutions would shun Notre Dame in the future. Keep in mind, Boston College couldn't get former Big East teams outside of Providence to play on a regular basis after the Eagles left the Big East for the ACC.

"We talked about a non-league game with BC after they left and I got a strong vibe from the Big East office," Brey said. "I took that suggestion and didn't play them. I guess it could happen with us, but I don't sense Villanova wouldn't want to play home-and-home or St. John's. I know DePaul and Marquette want to keep the Midwest Catholic rivalry going since it goes way back."

Brey said recruiting for the Irish will change, now that they can offer a Midwest kid the chance to play in the ACC -- along with players from the Southeast.

"We can get involved in the Carolinas, Virginia and Atlanta," he said. "We've always recruited D.C. and New England."

Brey said he believes ACC commissioner John Swofford's pledge that he doesn't want to go beyond 15 teams, and anticipates the ACC will become the Big East and gobble up eight or nine NCAA bids every season.

"So many people were jealous of the Big East, of us getting eight to nine to 10 to 11 bids," Brey said. "I think the ACC will move into that territory and get eight out of 15 teams in. It's kind of exciting to finish in the top half of the league and know that you can go to the tournament. That's gettable. It keeps hope alive when it's tough in November and December and you can still get a bid."

Brey said he will miss the Big East, Madison Square Garden and the chance to be the senior statesman in the league with Jim Calhoun retiring and Jim Boeheim off to the ACC.

"For me it will be like having a new coaching job without leaving, without having to rebuild," Brey said. "It's going to be a new challenge and at this point in my career I like it. I have great security. I want to give it a shot."