A win-win situation for Huskies, Spartans

11/12/12
7:10
PM ET
Michigan State lost a tight game in its season opener to Connecticut on Friday. It was one that the Spartans were convinced they were going to win.

So, what happened after the game?

Did Tom Izzo and the players sit in the locker room and sulk? Hardly. 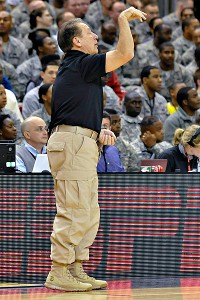 Martin Goldhahn/US PresswireAlthough his team lost to Connecticut, Tom Izzo and the Spartans had a memorable trip to Germany.

They spent a solid 30 minutes-plus on the court, talking to members of the Air Force and Army. They took photos. They signed autographs. And they shared thank-you messages with the troops, who were equally appreciative of the appearance by the players and staff.

The game at Ramstein Air Base was a huge success. I don't know what the ratings will show, and I don't have any financial figures to back up the claim. I can just tell you that's the case based on what I witnessed in person.

This USO-style tour is now in Year 1 of 5 (the plan is for ESPN and the Department of Defense to coordinate games at sites related to the four other branches -- Army, Coast Guard, Marines and Navy), and it works. The two games on the aircraft carriers that were canceled Friday in Mount Pleasant, S.C., and Jacksonville, Fla., were poorly timed. The games should never have been played on the East Coast and at night.

The game on the USS Carl Vinson last season in San Diego tipped at 4 p.m. local time. It started to rain about 40 minutes after that game. So when this year's contest between Syracuse and San Diego State on the USS Midway in San Diego was moved back from Friday to Sunday because of weather concerns, it made sense to play it during the day.

I'm not sure how much Ohio State, Marquette, Florida and Georgetown endorse the concept after dealing with canceled games. But if you talk to anyone on Michigan State or Connecticut who was in Germany, you're going to receive a glowing response.

The experience was unmatched for these two teams, as they were immersed on the base. You couldn't walk two feet without running into a member of the military in fatigues. And the educational aspect probably will be more beneficial than any other trip these players will take during their college basketball careers.

The players listened closely while medical personnel explained how they handled the wounded and fatalities. It was a sobering experience for players and coaches as they went from room to room at the hospital in Landstuhl and visited with the Wounded Warrior Center's injured troops.

The fun stuff -- flying in a C-130 plane -- can be duplicated in some similar form on various bases. Playing on a base ensures the game won't be interrupted by weather and guarantees a unique environment.

Those of us not in the military can't fully comprehend the sacrifice of being in a foreign land, living and working in a bubble and missing family milestones stateside.

The troops, officers, the families, the children of the enlisted and the civilian staff were incredibly appreciative to have a game on their terms. The line outside Hangar 5 stretched for blocks as troops filed in for the midnight tip. There was enough room for 3,100 to watch the game. There are 54,000 Americans in the area at the combined bases -- the largest number of Americans in a concentrated section outside the United States. If they could have fit seats for 10,000 fans in the hangar, I'm sure it would have been standing-room only.

Every single serviceman and woman appreciated having a game on their base. Many are career officers, a number are on multiple-year tours and getting to a game is almost impossible based on their schedules and location.

You can squawk that the games on ships are gimmicks. And maybe there were too many of them, considering two were canceled (with one shut down at halftime). But the military was genuinely overwhelmed that there was this much interest and commitment from two programs to fly to Europe.

The result had consequences for Kevin Ollie to potentially get the head-coaching job at Connecticut for the long-term. But neither teams' seasons will be affected dramatically by playing in Europe. This game was for the military -- a treat they were overjoyed to witness.

Brig. Gen. C.K. Hyde spoke Friday night about what it meant to the personnel to have this game on the base. This is arguably one of the most important military installations in the world with its gateway to North Africa, the Middle East and the rest of Europe.

Ramstein handles the wounded from down range. The base also handles the remains as a stop en route to the United States. Most recently, personnel at Ramstein dealt with the remains of the four Americans, including Ambassador Chris Stevens, killed in Libya.

It is a real and deep. And yet another reason why it meant so much to everyone in Germany to have a game played in front of them.

Bringing a game to a base is the right thing to do. I saw how much it meant to the men and women who are away from their families and friends. I saw the emotion. I heard the stories.

You don't think it meant something to a wounded warrior (Spc. Cory Gizzi) whose family probably saw him on television before he heads home to meet his 6-month-old daughter?

The military personnel are in a bubble away from home. College basketball came to them.

The game between the Huskies and Spartans was competitive, and that was a plus. But the event should be judged by the access the players and staff had with the military and vice versa.

And after three days on the base, the players were left in awe of their peers. That made it a win for everyone.