He needed to figure out his team and the loss has allowed him to zero in on some issues.

He said the issues are: 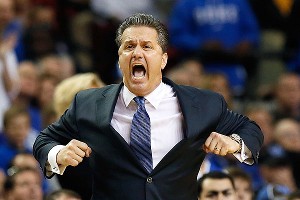 Alex Poythress has to be a strong man inside.

Archie Goodwin has to play under control if he's going to be a point.

Kentucky's coaching staff wants the Wildcats to add more wrinkles, but Calipari would much rather focus on strengthening what they do well.

Calipari added that he had immense respect for this Duke team and said the Blue Devils are much better than he thought.

As for his comment to me at halftime about Duke flopping, Calipari once again said he was joking. Of course, anything he says at this point goes viral.

• The latest reform movement in the NCAA should be on the transfer/waiver issue. The inconsistency continues. Oregon got Arsalan Kazemi for this season after he won his waiver to play immediately upon transferring from Rice. Traditional transfers, such as Rodney Hood from Mississippi State to Duke, sit. The NCAA should have one set of rules -- either everyone can go or everyone sits.

• New York's importance in the sport of college basketball is on full display this week. The 2K Sports Classic, CVC Classic, Legends and NIT are all at Madison Square Garden or Barclays Center in one week, bringing 16 teams to New York City in a seven-day period.

• The NIT is the last of these early-season tournaments that end up in a neutral site without predetermined semifinals. That's why non-power six schools should plead to get into the event. Delaware beat Virginia to land in MSG. Youngstown State beat Georgia but won't be going to Brooklyn. The Penguins knew the deal when they signed up for the Legends. The reason this won't change is for planning purposes. Television needs to know and the organizers have to get a gauge on selling ticket packages. If they didn't know who would be in New York it would make it extremely difficult to sell.