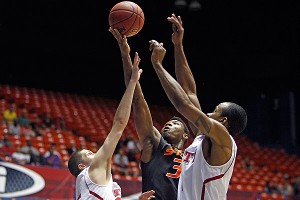 • Oklahoma State's Marcus Smart is as good as advertised and should have the inside track to national freshman of the year after leading the Cowboys to the Puerto Rico Tip-Off tournament title.

• Colorado is not a one-hit wonder after winning the Pac-12 tournament title and NCAA tournament game last season. The Buffaloes won the Charleston Classic and are legit Pac-12 title contenders. Tad Boyle has a program that won't go away.

• Duke guard Seth Curry can be the next Blue Devils playmaker to take and make big shots.

• Michigan State has found its next Mateen Cleaves, Charlie Bell, Drew Neitzel-type game leader in Keith Appling. And Gary Harris is a perfect complement in the backcourt to him.

• The NCAA can't explain decisions and lacks a consistent decision-making ability from one waiver or penalty case to another.

• Kentucky probably won't settle on a true point guard for quite a while. The Wildcats will have to get by using a committee, especially since Ryan Harrow is sidelined.

• Kansas has a high ceiling, but until Perry Ellis and Ben McLemore become dominant, the Jayhawks are vulnerable.

• Murray State can ride Isaiah Canaan deep into the postseason, despite having less balance and effective rebounding than it did a season ago.

• Ohio State's DeShaun Thomas is ready to be a star and can handle the workload of carrying the offense.

• NC State isn't ready for the spotlight yet. That doesn't mean it won't be, but the Wolfpack can't lose by 20 on a neutral court to an average Big 12 team and be the clear favorite to win the ACC.

• Alabama will be a factor for a top-four finish in the SEC and a potential NCAA berth. The Tide have a rising star in Trevor Lacey, and Anthony Grant has figured out how to balance his offense by having Trevor Releford coming off the bench.

• Villanova is tougher than Jay Wright thought. He has a Chris Herren-like prodigy in Ryan Arcidiacono.

• Oregon State's Devon Collier and Eric Moreland will have to be more consistent now that Angus Brandt is done for the season with a torn ACL.

• Kevin Ollie has proved that he deserves at least a three- or four-year deal from UConn. The Huskies beat Michigan State in Germany and have already handled adversity with wins over Vermont in what could have been a trap game and a gutty overtime effort in the Virgin Islands against Quinnipiac. This team is responding to his coaching.

• So far, nothing has deterred me or anyone else from believing that Indiana, Louisville and Michigan won't be in play for deep Final Four runs.

• Gonzaga and Pitt have two of the top international big men in the game in Przemek Karnowski and Steven Adams, respectively. Both bigs have lived up to the hype and will continue to be productive post players, as well as game-changing bigs.

• Every school outside of the top eight or nine conferences should try to get into the NIT Season Tip-Off in the future as the last tournament with a chance to finish at a neutral site. Delaware is the latest to earn a trip to New York with its victory at Virginia. Gardner-Webb had years of shelf life for its win over Kentucky en route to the NIT. And Saint Mary's started its run by getting to New York for an early-season tournament with an upset of Cal.

• UCLA's season starts anew now that Shabazz Muhammad has been cleared. Any previous perception of this team is now moot.

• Butler doesn't have an NBA player on the roster, and thinking that Rotnei Clarke can carry this team on his own is a mistake.

• Xavier's gloom and doom? It never happened. The Musketeers aren't back, because they never left. They can win the A-10.

• One game doesn't change a season. Florida State seems like it always has a stinker early, and this time it came in a loss to South Alabama. But the Seminoles rebounded to win the Coaches vs. Cancer Classic over Saint Joseph's.

• Marshall was expected to challenge Memphis in Conference USA, but the Herd have done little to show that's possible at this point.

• Going forward, UMass will have confidence that it can win games late after knocking off Harvard and Providence.

• Wisconsin's Mike Bruesewitz should be one of the nation's toughest players. He came back quicker than anyone thought from a near-career ending laceration.

• I'm not shying away from my pick of Florida to win the SEC. The Gators have cleaned up their issues and are back to being whole and looking strong.

• Keith Clanton should be applauded for staying at Central Florida (and so should Ryan Boatright and Shabazz Napier at UConn). The Knights are off to a solid start, and Clanton could have bailed on UCF once it was ineligible for the postseason.

• Gregg Marshall's Wichita State team isn't going away in the Valley and is a legit challenger to Creighton.

• Baylor has freakish talent, but it needs to defend to be taken seriously as a team that can go deep into March, let alone a Big 12 challenger.

• New Mexico coach Steve Alford was prophetic when he said he had the guards to contend for the MWC title. The Lobos have handled deficits and overcome Davidson and George Mason. Tony Snell is a star in that league.

• Oregon is a team to watch with the addition of Rice transfer Arsalan Kazemi.

• Belmont finally broke through with a significant early win, but unfortunately, few noticed. The win at Stanford will have shelf life in March.

• Remember that Bucknell, and not Lehigh, won the Patriot League. That's why the Bison are the team to beat again.

• Can't evaluate Missouri until Michael Dixon is back in Frank Haith's good graces.

• Santa Clara could have as big a turnaround as any team in the country. The Broncos can go from 0-16 in the WCC to top-three contenders. And Kevin Foster could be the player of the year in the WCC -- over anyone from Gonzaga -- after dropping 30 on Saint Louis.

• I miss my basketball talks with Rick Majerus. I hope to have them again. Prayers to him as he undergoes one of his toughest health and heart battles in the past 20 years.