Danny Berger is thankful for his miracle

Instead, all Danny Berger saw was black, a darkness for a split second and then nothing.

He was down on the Utah State practice court, heading into cardiac arrest.

"People ask me if I had a crazy experience, some sort of near-death story to tell,'' Berger said, a week after being brought back to life by the heroic work of athletic trainer Mike Williams. "I didn't have any of that. It all went black, and my body just shut down.

Moments earlier he was in a defensive drill. He had felt light-headed. 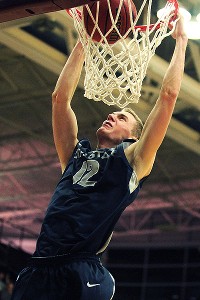 He hadn't slept well lately. He was more tired than usual. He would later learn that his potassium level was low. But none of it was a signal to him that his heart was on the verge of stopping. He had never had any heart problems in 22 years.

He once had a concussion, and he's sprained his ankle before. But he was not a candidate for sudden heart failure.

"I felt completely normal in practice,'' said Berger. "We were just preparing for the game [against rival BYU the next night, Dec. 5, which would be postponed because of Berger's condition until Feb. 19 in Provo]. We were running through some plays, I got light-headed, and then I went down. I don't remember anything until I woke up in the hospital.''

Berger was told his heart was speeding. The abnormal beats led to a cardiac arrest. Williams was on the scene and applied CPR first before calling for the automated external defibrillator (AED) to shock Berger's heart back.

In what Berger can only describe as a miracle, he's been at practice and around the team for the past few days and is ready to resume his schoolwork a week after being minutes from death.

He is indebted to Williams.

"We were good friends before this and I respected him, but I don't think words can describe how grateful I am,'' said Berger. "I told him, 'I can't ever repay you.' And he said, 'You just did. You're here. That's all you have to do.' He is a lifelong family friend now.''

He is incredibly thankful for the technology of AEDs and their accessibility, something that the late Hank Gathers didn't have when he collapsed on a Loyola Marymount court in 1990. And Berger will do anything in his power to promote AEDs.

"To think what would have happened if he had the same resources I did,'' said Berger. "I think about what if this happened to me when I was walking home or in the car or by myself with no one else around. This had to happen at the perfect time in the perfect place, and people had to be aware to do their job, and everyone did it perfectly. They did what they're supposed to do. I have had time to think about it and continue to wake up every day and be grateful that I'm here, that everything worked out and I can't believe it. It's just a miracle.''

Berger will go through some tests to see why it occurred. But there is no guarantee he will get an answer. Doctors inserted a permanent defibrillator in his chest as a safety measure, something he hopes will never go off, not because it didn't work but in the hope it never has to be used.

He can't raise his left arm up above his heart for three weeks due to that surgery. But he's out of the hospital and resuming schoolwork. He's watching the Aggies practice and play games. And he's doing it a week after this life-changing and lifesaving event. Amazing.

Berger was a starter for the Aggies for 25 of 31 games as a sophomore last season after returning from a two-year Mormon mission where the Medford, Ore., native served in Detroit. Berger was averaging 7.6 points in 22 minutes in the first five games this season for Stew Morrill, who, he said, has been tremendously supportive of him, as have his teammates. But playing basketball isn't going to be his profession. Berger wants to return to the game. But he won't push it and clearly won't be allowed back on the court until it is deemed safe by all parties.

"Basketball gives me a lot of happiness and joy, but I would play with a different perspective if I played and won't take it as serious,'' said Berger. "There's more to life than basketball. This made me think that we're here for a lot of reasons, and I've got to figure out spiritually what they are. I want to accomplish those reasons, and I think there's many of them, not just one or two.''

"I'm turning 23 on May 12. On Dec. 4, I'll celebrate my second birthday (after his near-death experience). I'm going to do everything I can to spread the word about AEDs. No one is happier than I am,'' said Berger.

Berger is now in a club that no one wants to be in, but he made it. It's for those who survive cardiac arrest through the help of CPR and an AED and heroic first responders.

"It's a humble club, and people who are in it are really thankful to be in it for the outcome to be the way it was,'' said Berger. "It's a good ending.''