Reflecting on the sad state of the Big East

The greatest conference creation in college sports is undergoing a complete facelift and won't resemble at all what we've come to expect over the past three-plus decades.

Basketball has suffered at the expense of football in conference realignment and the Big East will go down as its most destroyed victim. If, as expected, the seven Catholic schools officially break away, the league will have lost a stunning 13 of its members during this conference chaos.

So with that in mind, time for a little reflection and analysis on Big East basketball:

• No league might ever again have the coaching that came through the Big East during its early years. Nothing will compare to John Thompson Jr., Jim Boeheim, Jim Calhoun, Lou Carnesecca and Rollie Massimino coaching against one another.

• The laundry list of stars who came through the league is too long to list, but my favorite was probably those Georgetown teams and the centers who came through Washington, D.C., from Patrick Ewing to Alonzo Mourning and all the others.

• Madison Square Garden has had a plethora of famous events, too many to list. But the Big East tournament was appointment viewing during Championship Week, many years more so than some weekends of the NCAA tournament. Syracuse and Connecticut's six-overtime game in the 2009 tourney has to go down as one of the greatest games in college basketball history.

• Speaking of Syracuse, its rivalry with Georgetown was a matchup that really helped popularize the game during the 1980s. We can only hope the two will continue to square off in the future. 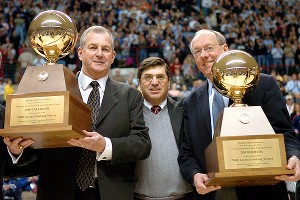 • Just my opinion: I realize it's a long way from home, but a Syracuse game in MSG always felt cozier and more intimate than an Orange game in the Carrier Dome. There's something special about seeing all of that orange at the Garden for a college game.

• Pitt and Connecticut built an underrated rivalry at the Garden. UConn fans will never forget Kemba Walker's step-back shot to beat Pitt and the five wins in five days as a precursor to the improbable 2011 national title.

• The late Dave Gavitt created the league in the late 1970s and saw it grow as commissioner. Mike Tranghese took the baton, but the bleeding started a bit under his watch when Virginia Tech, Miami and Boston College bolted. John Marinatto never had a chance and current commish Mike Aresco was never going to manage the real Big East under this climate.

• People don't know him nationally, but no conference staffer had a harder job than Tom Odjakjian. He had to schedule the Big East in pro arenas after the NBA, NHL, concerts, minor league hockey and the circus and other events were through getting dates. Then, in the past few years, he has had to juggle a number of different membership options. He has a thankless job that was never easy.

• The demise of St. John's was an underlying blow to the Big East. The league and MSG needed the Red Storm to be consistently good. But there were so many lean years that really hurt the interest in NYC.

• The additions of Conference USA members Louisville, Marquette and Cincinnati were brilliant. DePaul and South Florida were not.

• Connecticut and Cincinnati are two proud programs with tremendous histories. This is not what their fan base, alumni and administration want -- a conference with essentially Conference USA members. It'll be fascinating to track the near future of these two.

• The Big East scoffed at criticism of the additions of schools such as SMU, Houston, Central Florida and Tulane for football reasons. But those schools are part of the reason the seven Catholic schools had enough and wanted out. There's no denying that.

• The 16-team WAC had a chance to be a force in the West when Utah, BYU, UNLV, Tulsa and New Mexico were peaking, but too many interests killed the conference and splintered it into two leagues. The 16-team Big East was one of the best conferences ever, but too many interests split it as well. Both were victims of the inability to see a common goal and good for the game.

• If the league still has Cincinnati, Connecticut, Memphis and Temple in 2013-14, then that's still four programs that are generally considered among the top-25 best in the country. That at least has the potential to rival the top of the current Pac-12.

• On the flip side, let's not glamorize the departing Catholic 7 too much. Georgetown and Marquette are the only two programs that can be counted on to be in the NCAA tournament. Villanova is in a down cycle. St. John's, Seton Hall, Providence and DePaul have hardly been winners for the better part of the past 20 years. For this to work, the seven have to go grab Xavier, Dayton, Saint Louis and possibly Butler, Creighton and Gonzaga to really have staying power.

• Now two leagues, not just one, will be promising television deals without really knowing what the market commands from their inventory. On a sidenote, the notion that ESPN wanted the Big East to fade is rubbish. ESPN had a huge deal on the table that the Big East rejected. Had it taken the deal, Syracuse and Pitt might never have left for the ACC.

• If realignment never occurred, the Big East would have consistently put the most teams in the NCAA tournament and challenged for an NCAA title every season, much like the SEC in college football. But that's not the college sports world we live in now.

• Bottom line: It doesn't matter who gets the Big East name. What we grew to know is no more.