Wins over Ole Miss and Miami in the Diamond Head Classic in Honolulu have legs that will reach to March. The road win earlier this week at Wichita State keeps Indiana State within distance of the Missouri Valley title. The Sycamores are only a game out of first place with one game to go against each of the league leaders, Creighton and Wichita State. 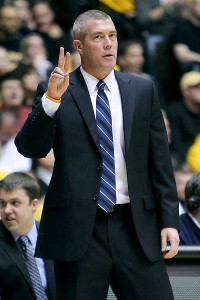 Now the trick is to get a power-rating game worthy of attention when the BracketBusters games are announced Monday at 6:30 p.m. ET on ESPNU.

The Sycamores represent the perfect candidate to benefit from this final season of the event, which was built to prop up teams outside the power six conferences. The event has wilted a bit in its importance, as higher-profile teams outside the power six have declined to participate, or in some cases, the entire conference is no longer a participant -- like the CAA this season. This may be the weakest the CAA has been in a long time, so its absence won't be as disturbing (see: no more VCU). Schools like Louisiana Tech -- leading the WAC -- fellow contender New Mexico State, Patriot League top teams Bucknell and Lehigh, and America East leader Stony Brook are all not in the event.

The home and visiting designations are predetermined for the Feb. 22-23 event. Indiana State is a home team, which takes the Sycamores out of playing Saint Mary's, arguably the most intriguing non-Missouri Valley team in the event. The Gaels are also a home team and are almost a lock to host Creighton in the highest-profile game of the weekend.

Indiana State coach Greg Lansing said he sent a list of his requests to the conference office, which works in conjunction with ESPN programming to put together matchups. Lansing said he'd like to see the Sycamores against Detroit (78 RPI), North Dakota State (62) or South Dakota State (64), which speaks volumes about the pool this year. Lansing is also trying to manage a return game on next year's schedule.

Ohio would make a more intriguing matchup, but strictly on power rating the Bobcats at 97 don't resonate as much. But that probably shouldn't be the deciding factor since Ohio still has D.J. Cooper and the shine of a Sweet 16 appearance from a year ago. The Ohio Valley's Eastern Kentucky, which checks in at 75, might be more palatable, too. Iona wouldn't be a bad choice, but the Gaels are at an RPI of 97.

"I want to play the best team out there that we can,'' Lansing said.

Indiana State also played New Mexico at home and lost in overtime in the MWC-MVC Challenge, and pushed San Diego State in Honolulu and in the opener at UCLA before losing both.

"We wanted to be in fun tournaments that prepared us for the conference,'' Lansing said. "These teams we've played aren't any better than Creighton or Wichita State. And those two might be the two best we've played, and that includes UCLA, New Mexico, Ole Miss and Miami. Both teams are so smart, athletic and long, and switch things up. Both of those teams can make runs.''

If Creighton at Saint Mary's is the marquee game of the event, let's speculate on the other 13 TV matchups that I could see occurring:

• Detroit at Wichita State: Shockers would get a decent RPI game, but not a game changer for the tourney.

• Ohio at Indiana State: This is probably the best the Sycamores could land.

• Montana at Utah State: This makes too much sense with the Big Sky's best going against the former Grizzlies coach in Stew Morrill.

• Stephen F. Austin at Murray State: The Racers have struggled, but SFA is one of the top teams nobody is talking about but probably will in mid-March.

• Denver at Belmont: Belmont has a sensational power rating at 17, and the Pioneers are familiar to Tennessee, having just left the Sun Belt for the WAC.

• South Dakota State at Niagara: This could be a sneaky good game with Nate Wolters leading the Jackrabbits to upstate New York, where the Purple Eagles have been a MAAC surprise.

• Pacific at Valparaiso: Two private schools who play fundamentals well and could easily be in the NCAAs representing the Big West and Horizon, respectively.

• North Dakota State at Long Beach State: This could match the winner of the Summit, and the top team in the Big West.

• Iona at Akron: Both of these schools are perennial contenders in the MAAC and MAC, and with RPIs under 100 make for a solid matchup.

• Illinois State at Davidson: Jackie Carmichael has been under the radar this season, and the Wildcats are a threat to win the Southern and earn a bid.

• Canisius at College of Charleston: The Golden Griffins have been a surprise so far in the MAAC, and Charleston is always good for a decent run in the SoCon.

• Weber State at Oral Roberts: Weber is trying to catch Montana in the Big Sky, while ORU is right in line with SFA in the Southland.