Monday musings from around the nation

Monday musings on the first Monday in February, a month when it's OK to use the word bubble without reservation. 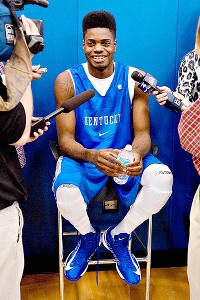 Mark Zerof/US PresswireNerlens Noel has made good on all of the preseason attention.

• Nerlens Noel went through a semi-normal freshman maturation this season. To expect Noel to have his timing down and be as effective in November or December as he could be in late January wasn't realistic. Noel has emerged as the most intimidating defensive big man in the country. His 12 blocks (and playing late with four fouls) against Ole Miss was as impressive a defensive performance as any this season. He altered nearly as many shots late in the game.

Noel, not known for his offense, blocked only two shots against Texas A&M but scored 19 points, tied for the team high, and grabbed 14 boards. Noel was compared to Anthony Davis because of his size, shot-blocking ability and being next in line at Kentucky. But remember he re-classified in high school and got to college a year earlier than expected. Noel's importance and presence will increase even more in the second half of the SEC season. And if Kentucky makes the NCAA tournament, as expected, Noel will likely be the reason for the revival.

• Ole Miss has gone through the toughest part of its schedule and lost two in a row. Now we'll know if the Rebels are a real contender with only two games left against teams with winning records in the SEC (at Missouri on Feb. 9 and at Alabama on March 5). If Ole Miss is who it thinks it is, even with a few injuries, then the Rebels will go on a run and finish strong.

• Florida is doing exactly what Billy Donovan said earlier in January: taking care of the journey before jumping ahead to March. Halfway through the SEC, the Gators are as locked in as they were in 2007 when they went on to win the national title.

• I might be proven wrong, but I'm not so sure there will be a bubble in the Big Ten or the SEC. Illinois' home loss to Wisconsin makes it hard to see the Illini suddenly waking up to become an NCAA team at 2-7 in league play. If Kentucky and Missouri can stay afloat, then the SEC should be settled with four bids, even with the Tide sporting a 6-2 league record. The Big Ten seems settled with Indiana, Michigan, Michigan State, Wisconsin, Ohio State and Minnesota.

• Winning at an elite level in men's basketball at one of the three service academies is almost improbable unless you have someone special like David Robinson. That's why it has been so rare. But the Air Force Academy has been unique. Joe Scott, Chris Mooney and then Jeff Bzdelik figured out a niche that worked. Now Dave Pilipovich has continued the legacy in his first full season as head coach. The Falcons are 5-2 in the MWC after beating San Diego State at home, following a road win at Wyoming. Air Force has the look of a postseason team. The Falcons have a legit scorer in Michael Lyons, and they locked down on defense against SDSU, holding the Aztecs to 2-of-19 on 3s.

• The Aztecs clearly aren't going to reach their potential if Xavier Thames isn't healthy. Thames missed the Air Force game with a lower back strain that has been nagging him.

• Villanova hasn't been able to get shelf life out of the home wins over Louisville and Syracuse. Losing at Notre Dame was acceptable, but a home loss to Providence proves that the Cats are who they are: an inconsistent, youthful team capable of going in any direction.

• Virginia will end up being the ultimate bubble team with a decent ACC record but plenty of pockmarks on its record. I can't even begin to guess which side the Cavs will fall on after losing at Georgia Tech on Sunday.

• If Michigan and Indiana play four times this season, we'll look back and say it gave us the necessary rivalry to keep interest high throughout the season.

• Cody Zeller embraced the moment Saturday as well as any player this season.

• There is an O in Wooden, right? I voted for Victor Oladipo and Kelly Olynyk for the Wooden Player of the Year award. I can't see how they were omitted from the midseason top 25 list.

• I still don't understand why Washington went for a lob to tie Arizona in Seattle last Thursday night. 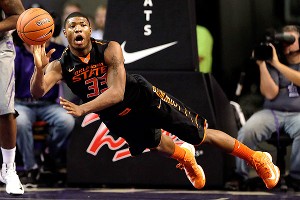 AP Photo/Charlie RiedelMarcus Smart and Oklahoma State got a huge win at Kansas over the weekend.

• Oklahoma State could end up being one of the most intriguing second-half teams in the Big 12 as Markel Brown and Marcus Smart continue to develop. Smart is living up to the summer hype heaped on him by USA basketball coaches Donovan, Mark Few and Shaka Smart. His five steals were as impressive as any other stat in OSU's upset win at Kansas.

• I loved Travis Ford's genuinely stunned reaction when the Cowboys upset Kansas. He seriously couldn't believe it had occurred.

• One player who has completely flown under the radar nationally is Iowa State freshman Georges Niang. He has been a difference-maker for the Cyclones without too many outside of Ames noticing. He was a tough matchup for Baylor to contain.

• Winning on the road in the Missouri Valley cannot be overstated. Unfortunately, losses at Northern Iowa (Wichita State) and Drake (Indiana State) are labeled as bad losses when, in reality, it's very difficult for even top teams to avoid some of these defeats when the target is squarely on them.

• And that's why the road wins by Gonzaga and Miami should be celebrated even more, regardless of conference affiliation.

• Now that Miami coach Jim Larranaga is having a coaching renaissance in a high-major conference job, it would be good to see Bob McKillop one day get the same opportunity if he ever wanted to leave Davidson.

• I don't care about Creighton's competition. Every opposing coach is trying to stop Doug McDermott in every game, and yet he still scores at will.

• Pitt may be the deepest team in the country, at least in terms of numbers. The Panthers used 10 players to beat Syracuse and only one player -- Tray Woodall -- scored in double figures.

• Do you get the sense Michael Carter-Williams is trying to do too much at Syracuse?

• Duke's Quinn Cook had one of the better lines Saturday and has stepped up when needed for the Blue Devils. Cook scored 18 points, dished out six assists and had one turnover. The Blue Devils had one of those weeks where winning road games was hardly a walk but they still accomplished both -- one in close fashion and another by popping a team from the start and never letting up.

• If I have to pick two teams each week to end the season in Atlanta, then this week I'm taking Indiana and Florida.