The men's tournament selection committee was in Park City, Utah, this week and into the weekend to review the tournament, tweak where needed and assess the future of the NCAA's grand event.

Remember, the NCAA has no control over the football playoff since that is being run by the five major conference commissioners. The men's basketball tournament is still the gem for the NCAA and its most protected asset.

The tournament doesn't need to be overhauled, but there are a few moves that will be discussed and, in the long term, could be enacted to potentially enhance the tournament. 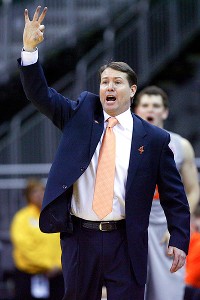 The bracket principles have been too stringent lately. The committee spends the majority of championship week working on selecting and seeding the tournament. Then when it comes to bracketing the field on Selection Sunday, the committee can sometimes get caught up in the principles. Schools aren't supposed to be playing in a rematch game or against a team from their own conference in the First Four or in the round of 64, and it should not occur in the round of 32, either.

But it has been unavoidable at times and happened last March when UNLV and Cal played a rematch from December in the round of 64. Oregon was moved off its projected line, at least by one, dropping to a 12-seed. That move for the Pac-12 tournament champ made no sense once Oklahoma State had to go against the Ducks in a 5-12 matchup -- and lost.

According to those close to the committee, the view is that the true seeds shouldn't be compromised at the expense of bracketing principles. The only issue that is untouchable is BYU not playing in a Friday-Sunday regional or feeding into one that is also a Friday-Sunday regional final if the Cougars are in the field. That should be the only case where a seed line may be moved to ensure the Cougars aren't put in a situation where they couldn't play.

The larger issue here is that the bloated conferences -- the 15-team ACC, the 14-team SEC and soon the 14-team Big Ten -- will make it almost impossible to avoid rematches. Early-season tournaments are currently battling this issue to no avail. Teams have grandfathered into tournaments that are now in the same conferences. The tournaments have made accommodations by putting the teams in opposite brackets, but if they meet again in the field before conference play, then so be it.

The same has occurred many times and will again this fall when teams that already had a nonconference game scheduled will be in opposite brackets in a tournament. If they were to meet again in the event, then that's fine, as well.

The goal is to seed the best teams in the bracket, and that should not be compromised.

The committee will also officially recognize that there are now 32 automatic qualifiers and one fewer at-large berth, at 36, with the creation of the American Athletic Conference and the new Big East splitting off from the former Big East conference.

The NCAA has been criticized many times for not helping families see their sons play on the grandest stage. Tickets are available to families, but traveling to multiple cities in a short period of time is a massive cost issue for families of players and for fans in general.

This is not an issue on the agenda in Park City, but it has some movement as a topic of discussion for the group. The tournament selection committee could hand out an olive branch by ensuring that families would be comped at the team hotel. Not everyone would need airfare since some of the sites are within driving distance. But the players' families do need to be taken into consideration.

Does each player's family get a stipend for each round of the NCAA tournament? Of course, this is an issue that would have to go through the legislative body, but an endorsement from the committee would carry weight.

This selection committee leans toward arenas for regionals, and NCAA vice president Mark Lewis is a huge proponent of having more intimate settings. The regional finals in an arena versus in a dome aren't close. 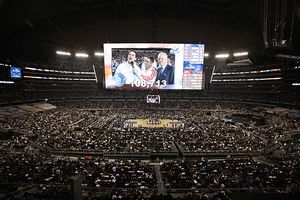 AP Photo/Tim SharpDomes may work for football, but they aren't the most intimate basketball setting.

The Final Four sites are set for the next three years: Cowboys Stadium in Arlington, Texas, in 2014; Lucas Oil Stadium in Indianapolis in 2015; and Reliant Stadium in Houston in 2016. The 2017-19 Final Fours will be out for bid at some point before the end of the calendar year.

The regional sites are booked out for the next two years with a dome in each of the two years that will host the following year. The 2014 regional final hosts are Lucas Oil Stadium in Indianapolis (dome), the FedEx Forum in Memphis, Madison Square Garden in New York City and the Honda Center in Anaheim. The 2015 regional final hosts are Quicken Loans Arena in Cleveland, the Staples Center in Los Angeles, the Carrier Dome in Syracuse (not considered a Final Four site, so it's a bit of an exception) and Reliant Stadium in Houston.

The new philosophy is that unless it is a new dome (e.g. the future home of the Atlanta Falcons that will replace the Georgia Dome) and the site needs a dry run through, then there won't be a need to have the future Final Four site host the year before. By eliminating that move, there is the chance that all four regional finals would be in arenas. The 2016 regional final sites will be decided around the same time as the 2017 Final Four. It will be interesting to see if the committee stays true to this and doesn't put a regional final in the site of the 2017 Final Four, which will be in a dome.

The selection committee is still massaging the configuration of the fans around the court at the Final Four. The courts have been centered at Final Four sites and students have been put in the end zones with media seating cut back along the baselines. Each site is different, but the ongoing discussion about how to handle the seating is up for debate again.

Wake Forest athletic director Ron Wellman is the new chair, taking over from former Xavier AD and current Georgia Tech AD Mike Bobinski. No previous chair was as open, transparent and engaging as Bobinski on selections and seedings or even admitting some tough choices whether they were right or wrong. Wellman has huge shoes to fill and must be as open as Bobinski was last year to ensure there is no Wizard of Oz-like perception of the selection committee with someone/people hiding behind a curtain without any real conversation about the process, selections, seedings and bracketing.