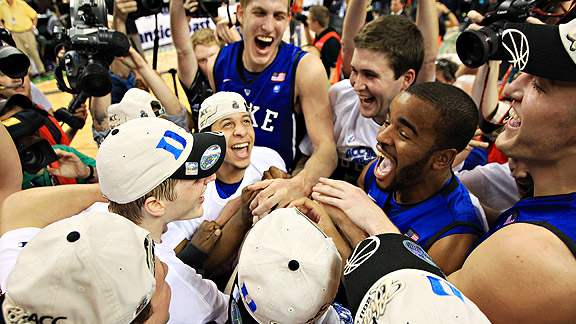 The ACC men's basketball tournament is the conference championship for the Atlantic Coast Conference. It has been held each year since 1954, one year after the conference's creation. Its history has been dominated by three schools in the Triangle of North Carolina, though eight schools have won the tournament.

The winner of the tournament receives the ACC's automatic bid to the NCAA Tournament and is dubbed the conference champion. In 2012, Florida State won its first ACC Tournament title.

The ACC Tournament began in 1954, one year after the ACC was formed. The inaugural championship was won by N.C. State, which beat Wake Forest, 82-80. N.C. State went on to win the next two titles, as well, and began to cement the state of North Carolina's hold on the title.

That continued during the next decade, as Duke and North Carolina each won the title four times between 1957 and 1970 -- North Carolina's 1957 win punctuated with an NCAA Tournament title, as well. Wake Forest also won two championships during that time, N.C. State won one, and Maryland -- the only school outside of N.C. to win in the tournament's first 17 years -- won in 1958.

N.C. State won two of the tournaments between the Tar Heels' titles, in 1973 and 1974. Both wins came over Maryland, in 1974 in a 103-100 overtime victory. That match-up has since become known as one of the best games in college hoops history, and it also is considered instrumental in forcing the NCAA to expand its tournament from 16 bids to 32, allowing more than one team from each conference to participate. N.C. State went on to upset Bill Walton's UCLA in the Final Four and win the national title that year.

The 1990s and 2000s saw the arrival of more teams to the ACC, including Florida State, Boston College, Miami and Virginia Tech. But the domination by the North Carolina schools continued. Georgia Tech won another two titles, in 1990 and 1993, but the North Carolina Tar Heels continued to succeed -- four titles between 1991 and 1998. Wake Forest also earned its first title since 1962, winning in 1995 and 1996 on the backs of Tim Duncan and Randolph Childress.

Duke won in 1992 and then was shut out of the title game until 1998, when it lost to the Tar Heels. But starting in 1999, the Blue Devils won five straight ACC titles, over Maryland, North Carolina and N.C. State. Duke lost to Maryland in 2004 but regained its championship in 2002 and 2003 -- marking nine straight championship games for the Blue Devils, seven of those successful.

North Carolina returned to the top spot in 2007 and 2008, while Duke once again took the titles in 2009, 2010 and 2011. Duke sits atop ACC history with 19 titles, while the Tar Heels are close behind with 17. N.C. State's 10 make 46 wins out of 58 for the Triangle schools. Clemson is the only inaugural ACC school without a championship to date, though BC, Virginia Tech, Miami and Florida State also never have won.