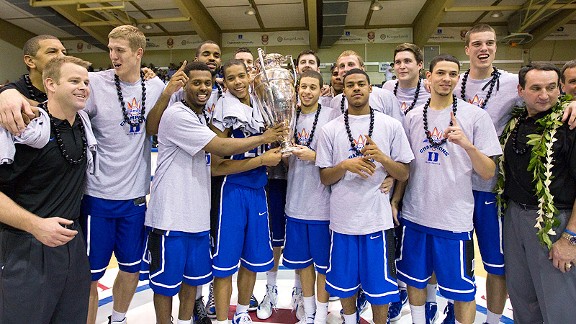 The Maui Invitational is an in-season college basketball tournament, one of the most prestigious early tournaments in the sport. The tournament has been held in Lahaina, Maui, every year since 1984. Eight teams participate in the tournament in Hawaii each year. In 2011, the field was expanded to include 11 mainland games featuring the seven teams headed to Hawaii and four teams playing a regional tournament in Murfreesboro, Tenn.

Illinois is the reigning champion of the Maui Invitational, having won the event in 2012.

The beginnings of the Maui Classic date back to 1982 and a game considered by many to be the greatest upset in college basketball history. On Dec. 23, NAIA school Chaminade defeated the top-ranked Virginia squad led by Ralph Sampson, 77-72. Then-Virginia coach Terry Holland told Chaminade that the win, which put the tiny, Hawaii-based squad on the map, could provide an opportunity for a Maui-based tournament every year in college basketball.

The tournament started two years later in 1984. Four teams competed for the title, with host Chaminade eventually losing to Providence. In 1986, the field was expanded from four teams to eight, the only change the tournament made to its format in 36 years.

Teams are invited to the tournament once every five years. Only Chaminade -- the host school -- plays in the tournament every year. Usually, each major basketball conference is represented by at least one participant, such as traditionally successful programs like North Carolina or Kentucky and other, smaller schools. The tournament provides some of the best nonconference matchups in the college basketball season. Twenty-one conferences, 38 states and 85 schools have participated in the tournament.

Four times, the winner of the Maui Invitational has gone on to win the NCAA tournament that season: Michigan in 1988-89, North Carolina in 2004-05 and 2008-09, and Connecticut in 2010-11. Duke has won the tournament a record five times and has never lost a game in Maui. North Carolina has won three titles (in 10 years).

In 2011, four more teams were added to the Maui field. Those teams will take on the seven teams that will travel to Hawaii in an opening round on the mainland. The four added teams then will participate in a doubleheader at one school before the other seven squads head to Maui for the championship round. That tournament will remain in the same format as in previous years.

The 2011 championship round field was Michigan, Memphis, Tennessee, Duke, UCLA, Georgetown and Kansas. In addition, Towson, North Carolina-Greensboro, Middle Tennessee State and Belmont participated in opening and regional games on the mainland before the championship round. Duke won the title, improving to 15-0 all-time in Maui.

The event is held every year at the Lahaina Civic Center, a small sports and entertainment complex on the island of Maui. Although the center is best-known for hosting the Maui Invitational, it also hosts the World Youth Basketball Tournament each year as well as concerts and other events.

The Civic Center Gymnasium seats 2,400. The stadium has undergone more than $1 million in renovations over the years to make the center more appropriate for the event, including putting in a new playing floor, updated (retractable) bleachers and new scoreboards and lighting. Air conditioning was also installed in the center in 2003.

All times Eastern - Watch live action and replays on WatchESPN.com 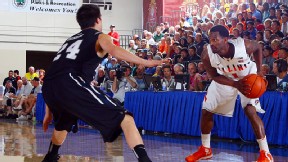 The Maui Invitational is on Facebook and Twitter. Connect with social media to get all the latest updates direct from the game.