By Aaron Boone
ESPN
Archive
It's safe to say that in 2008, when I was with the Nationals, things weren't going the way we wanted them to go. We finished last in the NL East and with a baseball-worst 59 wins. Then last year, the Nats tossed up another 59-win season. But this year, despite a tough loss Tuesday night against the Mets, it really seems as though the Nationals have hit their stride. So how did the club go from being the laughingstock of baseball to a legitimate contender in one of the toughest divisions in baseball?
[+] Enlarge 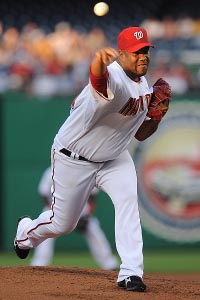 G Fiume/Getty ImagesLivan Hernandez has been one of the best pitchers in baseball so far this season.
A huge part of their success can be attributed to general manager Mike Rizzo. By going out and acquiring accomplished veterans like Matt Capps, Adam Kennedy, Jason Marquis and Ivan Rodriguez, Rizzo has improved the leadership and chemistry in the clubhouse. The Nationals are now a team that expects to succeed, and the value of that attitude adjustment cannot be overlooked. Rizzo also has made a commitment to improving Washington's defense, adding players like Nyjer Morgan and Adam Dunn to combat the club's error-laden past. Yet one of the biggest components to keeping the "new Nationals" competitive is their pitching staff. Tyler Clippard and Matt Capps are by far two of the best late-innings relievers in baseball. Clippard came over as a starter from the Yankees' farm system but has really found his niche in the bullpen. (He did, however, have a rough night Tuesday, giving up three of the six runs the Nats' bullpen surrendered in turning a 6-2 lead into an 8-6 loss.) He has a great changeup and his odd delivery really adds a deception factor to his fastball. As a hitter, all of a sudden a 91 mph pitch looks as though it's coming in a lot harder. At the back end of the rotation, Capps has been as good as any closer in baseball, pounding the strike zone and really throwing his best stuff. The Nationals may want to thank Pittsburgh for firing him up after a rough 2009 campaign. The other big pitching story for the Nationals is Livan Hernandez (4-1, 1.04 ERA), who should be in the same conversation as Ubaldo Jimenez and Roy Halladay through the first 6½ weeks of the season. What always impressed me about Livan and his half-brother Orlando "El Duque" Hernandez was their ability to do the most creative things with the baseball. Livan's fastball is average, if that, so it's his ability to manipulate pitches on the fly that enables him to throw at this point in his career without even close to the amount of heat he had as a younger player. Adding to the excitement of veteran players stepping up is a completely revamped farm system boasting some of the best young prospects in the league. When the Nationals took over for the Expos, their minor league system was completely stripped. Now Washington has cultivated the likes of Ryan Zimmerman, rookie shortstop Ian Desmond, promising Triple-A reliever Drew Storen, Jordan Zimmermann (who should be back later this season after Tommy John surgery) and, oh yeah, some kid named Stephen Strasburg. The Nationals' organization has definitely taken some lumps in the past, but we're starting to see an emerging franchise. It's hard to imagine them winning the NL East, but they should be able to compete year in and year out from a financial standpoint and keep their really good players around. The rough days are behind them, and the future looks bright.

Aaron Boone is an analyst for "Baseball Tonight."

Cueto gave up a single to Ronny Cedeno in the third inning of the Reds' 9-0 win. Why is that important? Well, it's the only baserunner Cueto allowed in a complete-game shutout against the Pirates. He struck out eight and did not issue a walk.

OK, so most of the Blue Jays had trouble against the Red Sox and Daisuke Matsuzaka in a 6-1 loss. Lind, though, had the most. He struck out three times as part of an 0-for-4 day. He has one hit over his past six games, a stretch in which he has gone 1-for-24.

Rain washed away Tuesday's game, setting up Wednesday's doubleheader. Roy Halladay will pitch the first game against Aaron Cook and the ageless Jamie Moyer will go in the nightcap against Jason Hammel.

Yep, more doubleheader action, after weather wiped out Tuesday's game. That delayed the return of the Javier Vazquez experience. He will pitch the opener Wednesday opposite Rick Porcello. Phil Hughes will start the second game against Jeremy Bonderman.

Matt Cain has won his past two starts, even toying with a no-hitter for six innings in his most recent start against the Marlins. Over those past two starts, Cain has permitted only five hits and two runs in 15 innings of work. He also has struck out 14 during the two-game run.

Most of the talk on the North Side so far this season has centered around the Cubs' slow start. Derrek Lee and Aramis Ramirez have stolen headlines with poor starts, the middle relief has been inconsistent at best and Chicago is five games under .500 and already looking way up at the St. Louis Cardinals. But in looking deeper one will find a fantastic start that has been overlooked.

Carlos Marmol entered this spring as the Cubs' full-time closer for the first time in his career, not having to compete with the likes of Kerry Wood or Kevin Gregg for the job. So far this season Marmol has not disappointed. He has struck out 30 batters in 14 2/3 innings. Thirty batters! That is a remarkable 18.41 strikeouts per 9 innings pitched or more than two per every inning pitched. To put that in perspective, if you take all pitchers to throw at least 50 innings in a season, the record for strikeouts per 9 innings pitched is 14.98 by Eric Gagne in 2003. That was the season in which Gagne saved 55 games and won the NL Cy Young award. Marmol's current pace blows that mark out of the water.