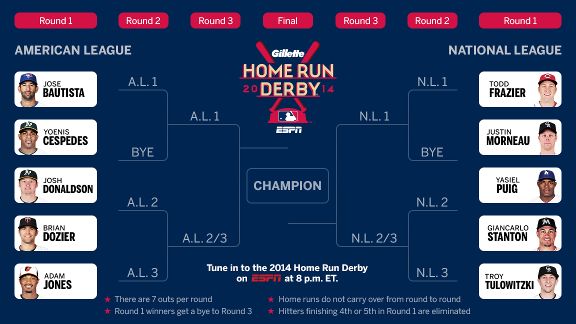 Major League Baseball's Home Run Derby is a special competition held annually the day before the All-Star Game in which players compete to see who can hit the most home runs. The format of the event has changed multiple times since its debut in 1985. Currently, 10 players compete in a four-round event, with each player getting seven "outs" per round.

The 2013 Home Run Derby was won by Yoenis Cespedes of the Oakland A's. Cespedes hit 32 total home runs, including nine in the final round.

Major League Baseball added Home Run Derby to the schedule of All-Star events in 1985 at the Metrodome. The event was set up as a competition between the two leagues, with players getting five outs per inning in a two-inning event. The format of the event allowed for ties among individual players for the championship. In 1988, the Home Run Derby was rained out, the only time since the event was created that it did not take place. The field size fluctuated in the early days of the event, starting with five players per league, dropping to three in 1986 and two in 1987 before increasing to four in 1989. The field was 10 total players from 1996 to 1999, and has been set at eight ever since 2000.

In 1991, the number of outs was expanded to 10, but the team competition format remained. However, a tiebreaker was put in place to determine an individual champion, and it was first used in 1993 when Juan Gonzalez defeated Ken Griffey Jr. in a playoff. Griffey Jr. won the title the following season, the first of his three Home Run Derby championships (the most for any individual player). The American League won the final team championship that year, finishing with five titles to the NL's four.

The multiround format that is currently in place was instituted in 1995, when the event shifted from a team-based to an individual competition. The field remained split evenly between AL and NL players, though there have been exceptions to that -- most notably in 2005, when the field was set with eight players representing eight different countries.

In 1998, Griffey won his second championship when he tied Jim Thome, 3-3 in the final round. Prior to the 2000s, ties were broken by the number of home runs a player had hit in the regular season to that point. The next year, Home Run Derby headed to Boston for the first time, and Mark McGwire put on a show, peppering 13 home runs in the first round, with most sailing over Fenway Park's famed Green Monster. However, McGwire ran out of steam in the second round, and the rules then did not aggregate home runs from the first two rounds, so he failed to advance to the finals, where Griffey won his second consecutive title.

Griffey went for a three-peat in Atlanta's Turner Field in 2000, but was out-hit by Chicago's Sammy Sosa, who established a record by hitting nine home runs in the final round. That same year, MLB again tweaked the format, setting up head-to-head matchups in the second round. The player with the most home runs in the first round matched up against the player with the fourth most. And two and three matched up against each other. The format meant that a player could have the second-most home runs total, as well as in the second round, and fail to reach the final.

That exact scenario happened in 2003, when Jason Giambi hit a round-best 12 home runs in the first round, then 11 more in the second round, but was eliminated by Albert Pujols, who hit 14 home runs in the second round, matching Giambi's single-round record (set in the first round in 2001). Garrett Anderson went on to win the title that year, then hit a home run in the All-Star game, becoming the third player to pull off that feat, joining Cal Ripken Jr. (1991) and Frank Thomas (1995).

In 2004, Miguel Tejada set a single-round record when he hit 15 home runs in the second round, en route to his eventual title. That record didn't last long, as the following season, Bobby Abreu hit 24 first-round home runs at Comerica Park in Detroit. Abreu finished the event with 41 total home runs, an event record that still stands.

In 2008, Josh Hamilton made Home Run Derby history at Yankee Stadium, hitting a record 28 home runs, including 13 consecutive at one point. Hamilton's show captured the crowd, but not the title. With totals reset for the final, Hamilton lost out to Minnesota's Justin Morneau. Hamilton's 35 total home runs hit during the event are still the second-most in Home Run Derby history. 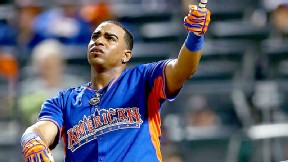 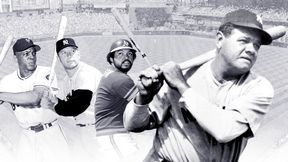 You picked the field of 32, our experts seeded them and your votes determined the Ultimate Home Run Derby champion. See which slugger won, and how he earned the title. Vote »