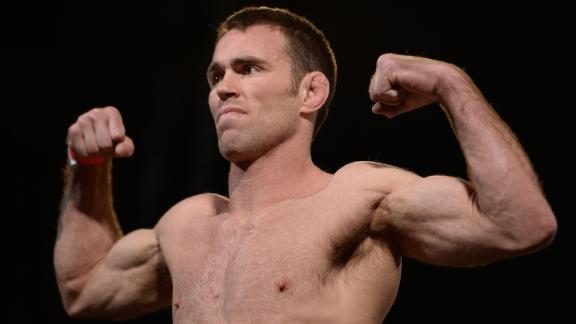 He didn't live up to the hype

The UFC ended a near four-year relationship with veteran welterweight Jake Shields on Monday, unceremoniously releasing the 35-year-old from his contract.

It feels like only yesterday UFC president Dana White and Shields (who was the Strikeforce middleweight champion at the time) were filmed sitting cageside at WEC 48 in Sacramento, Calif. It was April 24, 2010 -- before the UFC eventually acquired the entire Strikeforce roster in a company buyout. In an Internet GIF-worthy moment, White put his arm around Shields and mouthed the words, "He's mine" to the camera. Sure enough, Shields vacated the Strikeforce belt months later and signed with the UFC.

If you think about it, Shields never fully lived up to the expectations that were put upon him at that moment -- which is why the UFC is justified in releasing him. In eight UFC fights, Shields went 4-3 with one no contest because of a failed drug test. None of the three losses was competitive. All four wins came via decision, three of which were split. In other words, even when he won, Shields kind of lost.

This is not to say he is a bad welterweight. Shields is still top 15, easy. In the past 12 months, he has defeated Tyron Woodley and Demian Maia. No small feat. But the UFC is a business, and Shields no longer fit its model. Even in a time when there seems to be a UFC card every week, roster spots are reserved for fighters who (A) entertain, (B) sell, (C) challenge for titles, or (D) have potential to do A, B and/or C.

Shields' style has never been highly entertaining. His path to victory in recent years has been to basically remove the fight from the fight whenever possible. Whether he was savvy enough to do that became the most interesting aspect of his bouts. That was never reason to cut him, though, because Shields still had letter C on the requirement list down. He had the potential to win a UFC title. He was considered a long shot to do so, but, coming into this year, Shields hadn't lost in 27 months.

That potential (or the perception of it) died in a loss to Hector Lombard at UFC 171. That might seem dramatic, but it's accurate. After getting rag-dolled by Lombard in a frightfully one-sided contest, Shields didn't look like a possible contender anymore. He looked like a top-15 guy who might be a top-10 guy -- but never the No. 1 guy.

And that's why the UFC cut him. Keeping Shields' relatively lucrative contract on the books only to see him dismantle prospects in the most fragile way possible while never seriously vying for a championship wouldn't have made sense.

The argument that all top-15-level talent should have a home in the UFC is compelling, but there are exceptions to that rule. In this case, Shields didn't turn out to be the fighter the UFC thought it was getting in 2010. It's the promotion's right to acknowledge that and part ways.

Sad to see another grappler go

I say "no" only because of the effort it took in getting Shields into the UFC.

Shortly before Shields' comeback win against Dan Henderson for the Strikeforce middleweight belt in 2010, UFC President Dana White gushed on about how he'd love to see Shields in the UFC.

There were other public comments about how Strikeforce wouldn't pay Shields, whose contract was expiring, which led to a mini-skirmish between White and Strikeforce boss Scott Coker. It was not unlike a lot of the posturing White did with Bellator president Bjorn Rebney about Eddie Alvarez and their contract dispute.

Dana White usually gets what he wants, and he got his man in Shields. The former Strikeforce champ earned a title shot quickly ... and looked outclassed. But he was improving as wins over Yoshihiro Akiyama, Tyron Woodley and Demain Maia proved.

In Shields' release from the UFC on Monday, his departure feels as if UFC and White admitted they got it wrong with him. And with the fighter competing in a stacked welterweight division, he might have been viewed as redundant.

It also lays commentary on what the UFC is catering to. I'm all for putting on exciting fights. But I've had more than one wrestler say to me that it is counterintuitive that wrestlers go away from their strengths and try to make striking their main vehicle of attack. If you're a wrestler, why ignore your strength?

Yet so many do.

Why? Because the UFC and fans don't seem to want to see an intelligent grappling affair; they apparently want a poorly executed boxing match or street fight.

To be sure, a whirling ground game can be incredibly exciting with powerful takedowns, athletic switches and scrambles all leading to compelling submission attempts. The bantamweights and flyweights are perfect examples of this: wins without the knockouts.

So, as Shields leaves, another good grappler is given his walking papers because his striking abilities hadn't yet caught up to his ground skills. Jon Fitch's ousting and Ben Askren's continued alienation are similar in tone. Simply, they aren't all boring lay-and-pray fighters, and some grapplers get unduly labeled as such.

It's not the Ultimate Striking Championship. If it were, let's just call it K-2. And it's really not White's or the UFC's fault. They're just giving the "bros" what they want. Although Shields had his deficiencies in skill and marketable fighting style, he should have been given more time to improve.