Most Improved Player Of The Year Watch

1. Kevin Love, Timberwolves: He went from good to All-Star, leading the league in rebounding (15.2 points per game), and was second in double-doubles (64).

2. LaMarcus Aldridge, Blazers: Despite the rash of injuries to Portland's players, it was able to secure the sixth seed in the West thanks to Aldridge raising his game to the next level.

3. Eric Gordon, Clippers: The high-scoring guard missed 26 games due to injuries, but that was the only thing that went wrong during his career season.

4. Dorell Wright, Warriors: With every 3-pointer he knocked down, I wondered if the Heat regretted not being able to find more playing time for him.

(tie) 5. Russell Westbrook, Thunder and Derrick Rose, Bulls: For three-quarters of the season, Westbrook was both an MVP and MIP candidate.

Rose should be applauded for his across-the-board improvement, especially with his long-range shooting.

Defensive Player Of The Year Watch

1. Dwight Howard, Magic: Dwight winning Defensive Player of the Year and Blake Griffin being named the Rookie of the Year are the safest bets of all the major NBA awards. He is the lone reason the Magic have a top-10 defense.

2. Kevin Garnett, Celtics: Kendrick Perkins is gone, but the Celtics' defense will still be strong in the postseason as long as Mr. Intensity is roaming around.

3. Andrew Bogut, Bucks: One of the league's most underappreciated big men, he averaged a league-leading 2.6 blocked shots, while pulling down over 11 rebounds per game.

4. Tony Allen, Grizzlies: Thanks to his athleticism, he emerged as the league's top wing defender. He finished fifth in the league in thefts (1.8 per game).

5. Andre Iguodala, Sixers: On a team not exactly stocked with perimeter defenders, Iggy's nightly challenge is stopping the opponent's No. 1 scorer.

Sixth Man Of The Year Watch

1. Lamar Odom, Lakers: Watching Andrew Bynum get injured Tuesday night reminded us how lucky the Lakers are to have a player like Odom on the bench as insurance.

2. Jason Terry, Mavs: If you just watched JET in his last couple of games on national television, you would think all he did was miss shots. In reality, Terry had another season of filling up the nets for Dallas, averaging almost 16 points per game.

3. Thaddeus Young, Sixers: Doug Collins has done an excellent job of coaching this season, but remind me again why Young doesn't start for Philly?

4. Marcin Gortat, Suns: Who knew that the Magic used to have the two top centers in the East?

5. Glen Davis, Celtics: He always plays hard and brings energy and scoring to the second unit for Boston.

Maurice Brooks has been covering the NBA full-time for the past eight years. He joined ESPN.com in April 2008 as an NBA editor. Follow his thoughts on Twitter.

Rookie Of The Year Watch 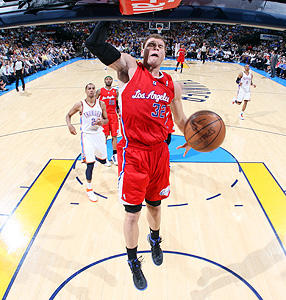 1. Blake Griffin, Clippers: The dunks, the scoring, the rebounding, the athleticism -- this has to be one of the most anticlimatic Rookie of the Year races ever. Just like at the dunk contest, he closed the show in style, notching a triple-double in his season finale.

3. DeMarcus Cousins, Kings: He had a very good rookie campaign but once again proved that the scouting report on him -- talented but immature -- was correct. He erupted for a career-high 30 points (he also had nine rebounds) in a loss to the Thunder on Monday night. Then, on Wednesday, he received two technical fouls and was ejected against the Lakers.

4. Greg Monroe, Pistons: If there was an award for the most improved rookie, Monroe would win the honor easily.

(tie) 5. Landry Fields, Knicks and Jordan Crawford, Wizards: Fields was considered the steal of the draft because of his outstanding rebounding and overall play before the Carmelo Anthony trade.

I guess the Hawks must have the deepest team in the league if they couldn't find a way to get some playing time for Crawford, who notched a triple-double (21 points, 10 rebounds and 11 assists) on April 1 against the Cavs.

Coach Of The Year Watch 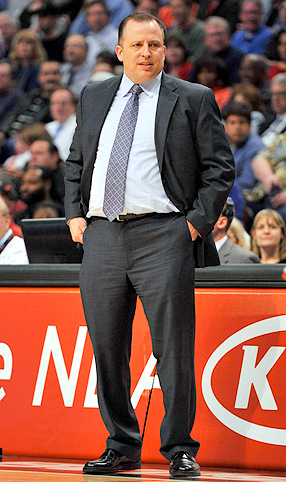 1. Tom Thibodeau, Bulls: It didn't take long for him to get Chicago to buy into his defensive-minded approach. We all thought the Bulls would be better, but nobody outside of Thibodeau's immediate family figured they'd be this good.

2. George Karl, Nuggets: The cancer survivor gets props for having the Nuggets block out the Carmelo Anthony distraction during the first half of the season and getting Denver to play much better than expected after the All-Star break.

3. Doug Collins, Sixers: He got the 76ers to overcome a horrendous 3-13 start and has the star-less squad in the postseason.

4. Gregg Popovich, Spurs: He probably sounded a little crazy when he said he was going to win by relying less on his Hall of Fame power forward and speeding things up.

5. Portland's Nate McMillan: I feel like I write the same thing about McMillan every year. He led an injury-ridden team into the postseason.