Nets GM Kiki Vandeweghe will make his head-coaching debut against Larry Brown's Bobcats at the Izod Center, marking the first time Brown will coach an NBA game against a player he coached in college.

Vandeweghe played his senior season at UCLA under Brown in 1980, earning All-Pac 10 and Academic All-American honors before being selected by the Dallas Mavericks with the No. 11 pick in the NBA draft.

Although Vandeweghe and the Bruins finished fourth in the Pac 10 in the 1979-80 season, they made it all the way to the NCAA title game before losing to Louisville, 59-54. Vandeweghe averaged 19.5 points per game and 6.8 rebounds per game in the 1979-80 season, leading the team in both categories. However, UCLA's 1979-80 season ultimately had to be vacated because of NCAA violations and Brown left the program after the following season to become head coach of the Nets.

Brown coached two seasons at UCLA (1979-81) and five at Kansas (1983-88), but not many of Brown's former college players have gone onto become NBA coaches. In fact, the only player Brown coached in college that went on to become an NBA head coach prior to Vandeweghe is Blazers GM Kevin Pritchard, who was at the helm in Portland for 27 games in the 2004-05 season. Pritchard played for the Jayhawks from 1986-90 and won the NCAA title under Brown in 1988. 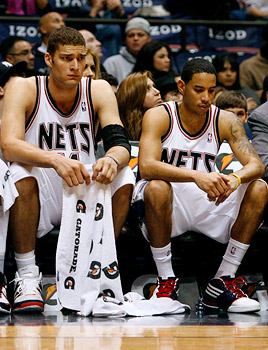 Can the Nets finally get a W against the Bobcats, or will their record skid extend to 19 games?

• The Bulls have lost their past five road games. The only NBA teams with longer current road losing streaks are the Nets (11), 76ers (7) and Raptors (6). Last season, the Bulls had two streaks of seven straight losses on the road.

• Derrick Rose and Brandon Jennings are the only NBA players averaging at least 10 points per game this season who have a scoring average that increases in each successive quarter. Rose's breakdown by period (one through four): 3.1, 3.4, 4.6, 4.8. John Salmons is the anti-Rose. Salmons' scoring average has decreased in each successive period this season (one through four): 5.0, 4.1, 3.6, 2.0.

• The 0-18 Nets' seemingly endless odyssey to win their first game continues Friday evening when they host the Bobcats. The record for most consecutive losses to start a season among NBA, MLB, NFL and NHL teams is 21, set by the 1988 Baltimore Orioles. New Jersey snapped a nine-game losing streak against Charlotte five years ago (Nov. 30, 2004), when the Bobcats were a first-year expansion team.

• The Lakers can set an NBA record when they host the Heat on Friday. The Lakers have scored at least 100 points and held their opponent below 100 in each of their past seven games. That equals the longest such streak in NBA history, a mark set by the Bucks in January 2001.