The soul patch, thanks to his girlfriend and Lakers vice president Jeanie Buss, has long since been shorn.

Which means the image you might have of Phil Jackson stroking that little tuft of hair on his chin as he dreams up new rotations or combinations or ways of getting just a little bit more out of the NBA's most talented team doesn't quite work.

Image or no image, though, whatever time he has saved by streamlining his grooming routine seems to have been added onto the already considerable amount of time he spends tinkering under the hood of the Lakers (24-5).

Experiments, first in his own head, then in a room with his assistant coaches, with different ways of putting together one of the league's deepest teams.

Tinkering, just for the sake of tinkering.

Surprising, just for the sake of surprising.

Creating -- by design, his players and assistant coaches say -- a constant sense of readiness and expectation of the unexpected.

Across the locker room, backup point guard Jordan Farmar was laughing at what is obviously an issue that each player who plays for Jackson discovers and has to adjust to very quickly.

"It's like, just when you think you know what's coming, he switches it up on you," said Farmar, who has probably experienced more fluctuation in his role this season than any other Laker.

• Read the rest of Shelbourne's story at ESPNLosAngeles.com 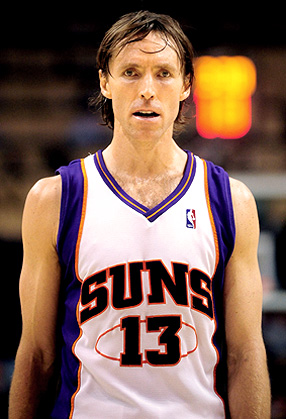 After a hot start, Steve Nash and the Suns have lost three of their past four. Can they get back on track at home against the Lakers?

How much can you take away from a single regular-season loss?

For fans of the Lakers and Magic, that debate had every bit as much resonance over the weekend as the discussion about what, specifically, went wrong in their teams' respective losses against Cleveland and Boston on Christmas Day.

I have trouble embracing the idea that a December loss forebodes anything meaningful about what might happen in May or June. If you follow one of the elite teams, you sometimes fall victim to the belief that only your team is capable of churning out a loss as profoundly ugly and inexplicable as the one you just witnessed. There must be something fatally flawed about the Lakers if they get blown out at home in decisive fashion by the Cavaliers.

But if the Lakers' effort raises the panic level to Defcon 4 in Los Angeles, then shouldn't the Nuggets, the presumptive No. 2 team in the West, be super-concerned that they lost on their home floor to the team primed to leap-frog them in the conference hierarchy? Shouldn't an Orlando team be chewing on its limbs after watching Dwight Howard and company put up a paltry 77 points in 96 possessions against Boston? And how about Boston's inability to close out a Clippers team that was coming off three consecutive blowout losses?