The D'Antoni Rules In New York

The rotation is short

This is a well-known characteristic of Knicks coach Mike D'Antoni. The Knicks employed 11 players in a blowout win against Indiana, which is rare for him. The last time D'Antoni went into double digits was Dec. 2 in Orlando. In between those two games, D'Antoni used eight players every game (including 11 straight) except for two contests, in which nine players saw the floor. Factor in that the No. 8 guy usually doesn't see a lot of minutes, and it's essentially a seven-man rotation. For instance, Eddy Curry saw "action" in three of those games, but he didn't play more than seven minutes. D'Antoni's rotation is much like what you'd expect from a playoff team. The best guys (according to him) get the lion's share of the minutes, a few other guys come in for breathers, and everyone else has front-row seats to an NBA game.

You're either in or you're out

There doesn't seem to be much of a middle ground with D'Antoni. The Knicks' coach has stated that he doesn't like to put veterans in for spot minutes, preferring to keep them on the bench instead of bringing them in cold. He has repeated this frequently, especially when asked about bringing in a non-rotation player for offensive or defensive purposes in a single critical possession. Chances are, if a player is seeing minutes, he'll continue to get court time. And the converse is true, as well.

This was apparent last season when the Knicks were short on guards after the Jamal Crawford trade, Cuttino Mobley injury and Stephon Marbury refusal. Instead of going to the next guy on the bench like most coaches would, D'Antoni ignored Anthony Roberson. New York rode Chris Duhon into the hardwood and even went guard-less at times rather than turn to someone on the end of the pine. So if a player thinks an injury means Coach D will be forced to insert him into the game, he's misguided.

If you're suddenly out of the rotation, don't expect a greeting card

Granted, this is a leap for yours truly to state, because I'm not omnipresent in the team locker room. However, Larry Hughes was quoted as saying: "There's nothing wrong with voicing an opinion because they're not facts. It's what you're thinking and how you're feeling. Just to have communication, I think, goes a long way in this league."

This isn't the first time a player (or Hughes, for that matter) has been unhappy with a lack of playing time and went public about it. However, in this case, it seems that Hughes isn't just lashing out because of spite. Compare this to Darko Milicic's rant on NBA coaches, and Hughes' request seems downright reasonable. But it doesn't appear that D'Antoni communicates his lineup changes to his players.

• Read the rest of Kurylo's post at KnickerBlogger.net, part of the TrueHoop Network 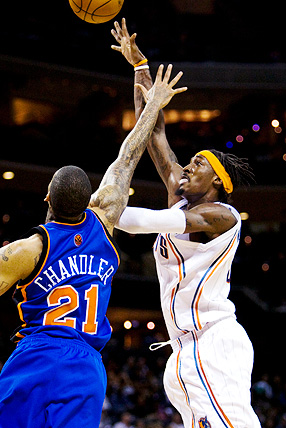 Charlotte's Gerald Wallace is in the midst of a career year, averaging 18.3 points and 11.9 rebounds a game while playing lock-tight D.

I'm not going to sit here and say with 100 percent certainty, "Gerald Wallace is a robot sent from the future to save mankind from opposing teams' offenses." I'm just saying I would be very interested to see the results of an X-ray. I'm beginning to think his missing time for a collapsed lung was just factory maintenance.

• Read the rest of Awards Watch

The Knicks, who host the Bobcats in the NBA's only game on Thursday, have posted the third-best record in the Eastern Conference since Dec. 1 (11-6). The only teams from the East with a better mark than the Knicks during that time are the Cavaliers (16-4) and Celtics (12-4). No Knicks player ranks among the league's top 25 scorers during that time, but David Lee (19.4 points per game since Dec. 1), Wilson Chandler (17.2) and Danilo Gallinari (16.1) all rank in the 26-50 range.

By Seth Landman
Special to ESPN.com

It will be a battle between slow and fast when the Charlotte Bobcats meet the New York Knicks on Thursday night. So far, slow has won the day. The teams have faced each other three times this season, and the only time either team reached 100 points was in the first meeting, which went into overtime and saw the Bobcats come away with a 102-100 win.

The guy you can expect to have a huge night for the Bobcats is Raymond Felton, who is averaging 22.3 points, 6.7 rebounds and 7.3 assists against the Knicks this season.  Besides David Lee, the Knicks haven't had anyone play consistently great against the Bobcats, but Wilson Chandler is a good bet to have a nice game after finishing with 26 points on 9-for-17 shooting the last time the two teams met.