Minnesota Timberwolves president David Kahn insists that Al Jefferson has not been made available -- to anyone -- in advance of the Feb. 18 trading deadline.

"As I've said publicly," Kahn told ESPN.com, "I have no intention of trading any of our core players this season."

It's a subject we covered in the Weekend Dime after hearing multiple rumbles during last week's D-League Showcase in Boise, Idaho, that the Wolves were prepared to start exploring the trade market for Jefferson amid questions about Jefferson's compatibility with Kevin Love and how he fits in Minnesota's more free-flowing triangle offense under new coach Kurt Rambis.

"A case can be made that either Jefferson or Love -- undeniably good players individually who are still both developing -- would be helped greatly by playing next to a more athletic sidekick no matter what the system."

But a source with knowledge of the Wolves' thinking subsequently dismissed the idea that Kahn would part with Jefferson just a half-season into his recovery from a torn ACL in his right knee that limited him to 50 games in the 2008-09 season.

In a pretty candid recent appearance on ESPN's NBA Today podcast with Ryen Russillo, Kahn himself conceded that the Wolves aren't sure if Jefferson and Love can play together in the long term ... but also said that it's too early in Jefferson's comeback for such judgments. The interview sure made it sound as though Minnesota wants to give the tag team an entire season of evaluation before thinking about breaking them up, since Jefferson -- when healthy -- ranks as one of the league's last true back-to-the-basket forces. 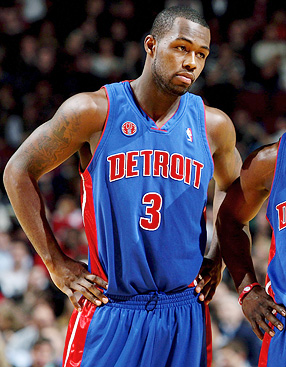 Rodney Stuckey and the Pistons head to Chicago hoping to snap a 12-game losing streak.

• Monta Ellis has scored at least 20 points in each of his past 11 games. Over the past 17 seasons only one other Warriors player has scored 20 or more points in 11 consecutive games in one season: Stephen Jackson, who had an 11-game streak late last season. Ellis has scored 336 points over his past 11 games. That's the most points over an 11-game span for any Warriors player since Antawn Jamison scored 338 in December 2000.

• The Suns, who host the Bucks on Monday, have won 21 consecutive home games against Milwaukee. That's the second longest home winning streak Phoenix has ever posted against one opponent. The Suns won 24 straight home games against the Kings from 1988 to 1998. The Bucks' most recent win at Phoenix was a 115-107 victory on February 21, 1987.