PLAYA VISTA, Calif. -- The possibility of surgery on his fractured kneecap was always in the back of Clippers forward Blake Griffin's mind, even as he slogged through the rehabilitation process with every intention of getting back on the floor before the All-Star break.

Once he experienced serious discomfort this week, that prospect became a reality. Griffin will undergo surgery Jan. 20 in Los Angeles. The current prognosis is for him to be off the court for between four and six months.

A stoic Griffin addressed the media Wednesday at the Clippers' training facility. The rookie expressed disappointment that he won't be able to take the floor this season, but he also conveyed a calm resolve at his misfortune.

"I don't think of it as season-ending, because technically I haven't started," Griffin said. "I guess you could say it's a debut-prolonging injury."

The decision to opt for surgery came after Griffin felt pain in the knee while he was in the pool Tuesday for aqua therapy.

"I'd been cleared that day to take it a step further," Griffin said. "I felt it a little bit, and I could just tell from doing specific stuff that I wouldn't be able to be 100 percent."

At the time of the initial diagnosis of a broken kneecap, Griffin had two choices: surgery or the extensive treatment regimen he's followed over the past 12 weeks.

"Letting it heal would be the quicker option, so obviously we had to give that a try," he said. "That was the prognosis of multiple doctors."

Read the rest of Arnovitz's story at ESPNLosAngeles.com

Before we heap any more praise on Kobe Bryant for being indestructible these days -- especially as he tries to downplay it by describing himself as "just a tough American kid" -- let's pause for a moment and recognize his backcourt mate Derek Fisher's continued accomplishment.

While Bryant has plowed through injuries this season like that scene in "Terminator 2" when the T-1000 barges through bullets (I know, I know, Bryant also described himself as Bruce Willis in "Diehard" because of his pain threshold, but let's give another late '80s/early '90s movie franchise some shine), it's Fisher who has quietly become one of the league's most consistent clock punchers.

Fisher has played in 370 straight games (Portland's Andre Miller is first with 570) and is still going strong despite turning 35 years old in August. Bryant is fifth on the active list with 223 straight games, or about a season and a half less than Fisher.

(Quick aside: We would be remiss not to mention A.C. Green any time the subject of Lakers ironmen comes up. The Beanie Baby-headed one's all-time NBA mark of 1,192 dwarfs Fisher's and Bryant's measly runs combined.)

It's no surprise that Fisher has kept his streak alive. Have you looked at him lately? He keeps his body in better condition than 90 percent of the players in the league. But his off-court leadership and mentorship of Shannon Brown and Jordan Farmar is starting to overshadow his on-court production. Fisher's points per game, field goal percentage and assists per game averages are the lowest they've been since 2003-04.

Read the rest of McMenamin story at ESPNLosAngeles.com

Not Your Average Joe 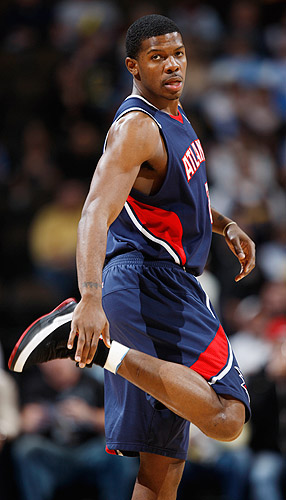 Joe Johnson has lifted the Hawks to new heights in his fifth season since leaving the Suns.

• Steve Nash has the lowest rate of personal fouls among NBA players who have started at least 10 games this season. Nash has committed an average of one foul every 29 minutes. Amare Stoudemire has the most personal fouls in the NBA this season (147), three more than Dwight Howard and Jason Thompson. The only Suns player to finish a season as the league leader in personal fouls was Neal Walk in 1972-73 (323).

PORTLAND -- Here's one thing we still don't have a stat for: fit. Over the past several seasons I've talked a lot about numbers from both an individual and team perspective and drawn some very firm conclusions from them. However, getting from the one to the other presents a palette of grays. How well those players fit with their teammates has an effect on whether the individuals perform closer to the top or bottom of their potential. And we're still learning about how all those interactions work.

This season's Portland Trail Blazers offer a great case study. With all the injuries they've had, we've had an opportunity to see lots of different combinations. And since the personnel is nearly the same as the previous season's squad, that offers another big sample of games on which to base our comparisons.

For Portland, the most evident issue is that the Blazers' best players don't necessarily mesh well with one another. Brandon Roy and LaMarcus Aldridge have good on-court chemistry, but once you put Greg Oden and Andre Miller into the mix, the picture muddies considerably.

Read the rest of Hollinger's PER Diem