Gaines Rises To The NBA

Arenas' Next Move? How About Orlando?

It's widely assumed that Gilbert Arenas will never play another game for the Washington Wizards, even if no one seems quite sure yet how soon or by what means Arenas and the Wiz will ultimately part ways.

So it's also natural to start wondering which teams out there might be interested in Arenas when the 28-year-old is finished meeting all the sentencing requirements stemming from his felony gun-possession charge and receives his eventual clearance to return to work from NBA commissioner David Stern.

Will Arenas manage to avoid jail time when he's sentenced March 26? Are the growing whispers true about the Wiz -- fearing they don't have a strong enough case -- backing off the idea of trying to void Arenas' contract? How much longer will Arenas remain suspended by the league? Can Washington realistically find a trade partner or negotiate a buyout of Arenas' contract when it still owes him $80.2 million over the four seasons after this season?

For all the above unknowns in circulation, here's something definitive I've heard from three separate folks close to the situation: Arenas would love to land with the Orlando Magic when this ordeal is over.

How About LeBron As A Clipper?

While LeBron James has openly flirted with the New York media over the past few years, and the Knicks have done little to disguise their intention of being players for James and this summer's talented free-agent class, the Clippers have quietly but sharply positioned themselves as an exceptionally viable suitor in this summer's long-awaited free-agent bonanza.

With only seven players and $39 million committed to the 2010-11 roster, the Clippers are a cheap trade or two away from having enough salary-cap space to hook one of the giant free-agent fish that will hit the open seas July 1.

Read the rest of Shelburne's story, go to ESPNLosAngeles.com. 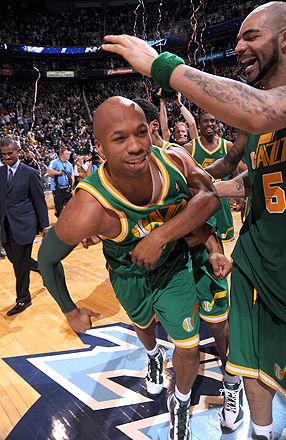 Watch Denver assistant coach John Welch toward the end of the first half. He will leave the bench and go to the locker room. There, he and video assistants prepare snippets from the first half for the team. Chauncey Billups is the player who learns the most from the video.

"The first half, it's not that I'm not shooting at all, but I'm looking to see how they're playing certain plays and when I can break off the play and when not," Billups told the Denver Post. "And then at halftime, when I can watch back and watch a couple plays on film, I can be more aggressive and say, 'This is what I'm going to get on this play, this is where my opportunity opens up.'" And Billups' aggressiveness is seen in the third quarter.

By ESPN Stats and Information

Most Regular-Season Coaching Wins Without Winning an NBA Title