"The worst good team against the best bad team" might not make for a great tag line, but when the Bulls and Suns meet Friday night (10:30 p.m. ET, ESPN), that description won't be too far from the truth.

Since Phoenix is 25-18 this season while Chicago is just 18-22, it might seem as if the Suns should be overwhelming favorites. But look a little deeper and this matchup is an interesting one because of how the past month has gone for each team.

The two clubs are going in opposite directions at the moment. Phoenix might earn the honor of "worst good team," given that the Suns are 11-15 since the start of December and had dropped four straight before a win over hapless New Jersey on Wednesday stopped the bleeding.

In a Western Conference in which 11 teams are vying for eight playoff spots, it's little solace that the Suns remain seven games over .500 -- they have only a 65 percent chance of making the postseason according to Friday's Playoff Odds.

The Bulls, meanwhile, are 8-5 over the past month, including wins over Orlando and Boston, quelling mounting speculation about coach Vinny Del Negro's job status and putting Chicago into the No. 8 position in the Eastern Conference playoff race. They're essentially locked in a three-way battle with Milwaukee and New York for the East's final playoff spot, with Friday morning's Playoff Odds giving them a 35.8 percent shot of grabbing it.

• Read the rest of Friday's PER Diem.

By Jeremy Lundblad
Special to ESPNBoston.com

Just in case last season was not evidence enough, the past 10 games have only reinforced what was already obvious: The Celtics need Kevin Garnett. Badly.

Last season with Garnett in the fold, the Celtics were 44-13 and seemingly destined to repeat. Without him, they stumbled to an 18-7 record, 25-14 if you include the postseason.

This season, the Celtics are once again winning about 75 percent of the games in which Garnett has played (22-7). Without him, they are reeling, with losses in six of their past 10.

So yes, the Celtics are better off with the future Hall of Famer on the court. That goes without saying. His expected return Friday is a welcome momentum shift for a Celtics team that hasn't used its regular starting lineup since Dec. 20.

But why? What is it about Garnett that's so valuable? Why, despite having added Rasheed Wallace, are the Celtics unable to survive without him?

Garnett no longer needs to be the offensive force who averaged 20-plus points per game for nine straight seasons. He hasn't scored more than 26 points in almost two years. Wallace and even Glen Davis are capable of putting up the 15 ppg that Garnett now averages. That's not replacing Garnett entirely, but with Ray Allen and Paul Pierce in the fold, the Celtics can afford to give up some offense. 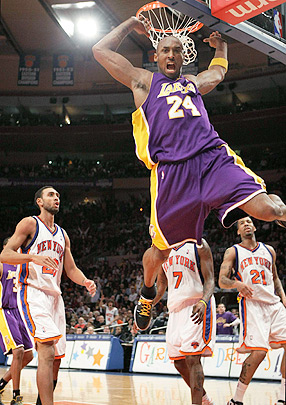 • Kobe Bryant's 61 points in his last appearance at Madison Square Garden (Feb. 2, 2009) were the most for any player in NBA history in a game in which he had no rebounds. One other player has had a 50-point game without grabbing a rebound (Damon Stoudamire, 54 on Jan. 14, 2005).

• Kobe's 100 points over his past two games at Madison Square Garden are the most by any player over a span of two straight games in this building, which opened in 1968. The second-highest two-game total was by the Knicks' Bernard King (97 points, Dec. 25-29, 1984). The second-highest point total for a visiting player over consecutive regular-season games at the current Garden is 88 by Michael Jordan (55 and 33 points, March 28, 1995 and Jan. 3, 1996).

By Josh Whitling
Special to ESPN.com

Robin Lopez, C, Phoenix Suns (8.2 percent owned): Wow. The 3.3 blocks per game since Jan. 15 isn't too surprising, as he's always had high block-per-minute numbers and is finally getting playing time. But 14 points and six boards as well? That sounds like a player ready to contribute in more than one category after languishing on the bench for a season and a half.

The novelty of a big man shooting 3s without providing a post presence (Channing Frye) has seemingly worn off in Phoenix, as Lopez has apparently decided to climb out of the shadow of his twin brother to establish a name for himself among contributors on the professional level. Add him in all formats if you need blocks.