One glance at the breakdown of second-chance points allowed by the Boston Celtics in recent games seems to reflect a glaring reason for their struggles. The Celtics were outscored on second-chance points, 49-15, during a three-game home losing streak last week and that statistic didn't exactly improve Friday when the Portland Trail Blazers boasted a 22-8 advantage in Boston's overtime triumph.

What's more, opponents owned a 130-106 advantage in total rebounds during that three-game losing streak to Atlanta, Dallas, and Chicago, with a 32-19 advantage on the offensive glass.

Asked about those troubles this past weekend, Celtics coach Doc Rivers didn't seem overly concerned. In fact, he suggested the lopsided numbers actually show how well the Celtics are playing defense this season.

"We're holding teams to 41, 42, 43 percent shooting [from the field], so clearly there's more offensive rebound opportunities," said Rivers, whose own team is shooting an NBA-best 48.7 percent, while limiting opponents to 44.3 percent (sixth in the NBA). "If we can get defensive rebounds, we can shoot 60 percent, because we can run. When teams are scoring and getting offensive rebounds, that slows the game down and takes us out of our break."

Rivers noted that the Celtics don't put a heavy emphasis on generating their own offensive boards. He instructs his guards to fall back immediately upon shot release, while the bigs have the freedom to crash at their discretion. The Celtics have generated 20 or more second-chance points just once this year (Dec. 14 vs. Memphis) and haven't scaled more than 16 points outside of that visit to Memphis, where Boston boasted a 20-13 edge over the Grizzlies.

It's worth noting that, when the Celtics were most successful, including at the start of the season, opposing teams rarely generated higher totals in second-chance points. Opponents scored more than 10 second-chance points only once during a 6-0 start to the 2009-10 campaign.

• Read more on the Celtics at ESPNBoston.com. 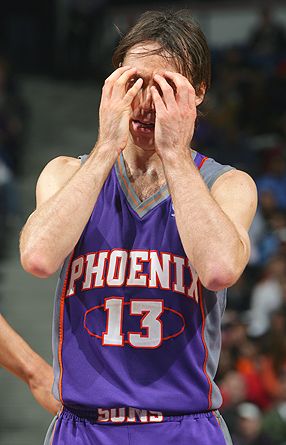 Steve Nash and the Suns have lost five of their past seven. Can they heat up against the Jazz?

By Brian McKitish
Special to ESPN.com

2.1: Blocks per game this month for Gerald Wallace. For those that remember, Crash used to be quite the shot-blocker and even swatted 2.1 shots per game in 2005-06 but averaged about 1.0 the past few seasons. This season has been different. Let's call it the Emeka Okafor effect. Now that Okafor is no longer clogging up the middle on the defensive side, Wallace finds himself in the paint more often where he's able to grab more boards (11.1 per game) and swat more shots. It's not a coincidence that Okafor missed most of the 2005-06 season when Wallace set his career high in blocks. With that said, expect Wallace to continue to produce on the defensive end with boards and blocks aplenty.

13.1: Rebounds per game in January for Marcus Camby. Camby gets a big bump in the rankings due to the news that Blake Griffin will miss the rest of the season. I had been hesitant to move Camby or Chris Kaman too high in my latest fantasy player rankings when it looked like Griffin would return, because I thought Griffin would cut significantly into their production. Now that the Griffin fear is gone, the only thing left to worry about is the lengthy injury history for both players. I'll take that risk given the way they've been playing.

• Read the rest of the Weekly Ranks column.