He knew it might be coming. He knew his name might pop up on the Eastern Conference All-Star team. His teammates and coaches were convinced he would make the team. Even some of his opponents had spoken out on his behalf in recent days. After all, he had been playing better than anybody in basketball over the past two weeks, seemingly overpowering other guards whenever he got the chance.

The 21-year-old guard just sat on his bed in his New Orleans hotel room and smiled.

His dream had become a reality.

I caught up with Rose just moments after the announcement was made, and it's safe to say that he will be savoring this feeling of accomplishment for a long, long time.

Nick Friedell: Describe the feeling of what it's like to be an All-Star.

Derrick Rose: I really can't describe it right now. It really hasn't hit me. Hopefully, when I get down to Dallas that's when it will really hit me, I know. I really didn't know [there] wasn't an All-Star for the Bulls since Mike [Jordan] in '98 or something like that, so just thinking about that it's amazing.

NF: You're a guy who grew up following Jordan. How cool is it that you are the first Bull since him to be in the game?

DR: It's cool. (Smiles) It's cool. After I'm long and gone with the Bulls [players] after me or whatever, people will say that I was an All-Star for the Chicago Bulls. I'm from Chicago. That's a big thing. Especially being from there. [My] family, relatives and friends are just excited about it, more than I am, I'd say. I've been getting texts all day, calls. People are calling from out of state that used to live in Chicago. Everybody's just happy for me and I hope I just keep playing well.

• Read the rest of Friedell's Q-and-A with Rose at ESPNChicago.com.

Break Out The Brooms? 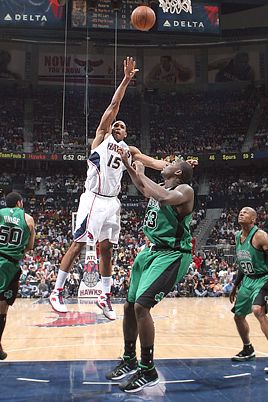 The Hawks have already downed their East rivals three times this season and twice in January. Can they make it a clean sweep in Atlanta on Friday?

• LeBron James has scored 35-plus points in three consecutive games at Conseco Fieldhouse in Indiana. That is the longest such streak for any player at that arena since the Pacers began playing their home games there in 1999. With a performance Friday similar to his past three, James would become the second NBA player to post four consecutive 35-point games against Indiana, regardless of the venue. Michael Jordan did it from 1989 to 1990.

• The Celtics have lost 10 of their past 19 games. If Boston loses at Atlanta, it will mark the first time that the Celtics will have posted a losing record over a span of 20 games since Kevin Garnett and Ray Allen joined the team in 2007.

• With a victory at home over the lowly Wizards, the Nets (4-40) can win back-to-back games for the first time this season. New Jersey is the first team to advance this far into a season without consecutive wins since the Grizzlies needed 73 games to record their first two-game winning streak in the 2006-2007 season.