EAST RUTHERFORD, N.J. -- Del Harris emerged from the assistant coaches' room surprised to see a small crowd of reporters awaiting him, a development that upset him to the point that he grew uncharacteristically defensive.

In a printed statement he issued afterward, Harris said he believes interim coach Kiki Vandeweghe has made strides with the New Jersey Nets; there is "strong evidence that the team has gotten over the hump and will be much more competitive the rest of the way," Harris said.

But anybody who has ever written or read a prepared statement knows that the real truth is usually untold or glossed over, and Harris was dumbfounded that the news of his departure had broken during the game.

"The news isn't supposed to be out,'' Harris said. "[PR director Gary] Sussman has my comment.

"It's all right," Harris said when pressed for the reasons behind his departure. "I don't want to get into what I said [in the statement], and what I said is the total story. It's all good."

Well, Del, as much as we've grown to respect and admire you over the years -- mostly because of your candor -- it's tough to believe the surface has even been scratched as to what the total true story is.

When he was brought aboard as an assistant following the firing of Lawrence Frank, Harris and the Nets gave no clue that his job would be quite so temporary, and his addition to the staff was touted as a move that would especially help the development of Chinese forward Yi Jianlian. Harris made Yi a starter at age 16 for the Chinese national team in 2004, when Harris coached China's Olympic team in Athens.

"I didn't know before; I just heard about it and I didn't talk to him yet," Yi said afterward in halting English.

Asked if he was sad, Yi replied: "A little bit. I like him."

That's the thing with Del -- most everybody likes him, or liked him, as the case now seems to be. The white-haired, 72-year-old basketball sage is as genial and gregarious as they come, which made his abrupt manner as he departed the building all the more out of character.

"You haven't interviewed me all year, why am I going to interview with you now?" Harris said, apparently unaware that a Nets team policy forbids assistant coaches from speaking to the media -- a rule Harris himself broke on his first day on the job when myself and others interviewed him about rejoining the NBA after he left as Vinny Del Negro's lead assistant in Chicago at the end of last season.

"I mean, I've been available all year," Harris continued, "but I left you a statement and it's fine. I enjoyed my time here, and there's no negative to this story. I know you guys are going to hate that, but there's no negative at all. It's all joy. It's time to go."

And with that, he was gone.

It was certainly a new level of loss for a team that has made losing an art form in so many different manners and ways this season. Assistant coach John Loyer is now expected to slide over into the lead assistant's role, and Vandeweghe must still find a way to try to squeeze six more victories out of this misfit outfit to avoid tying the record for the worst season in NBA history -- 9-73 by the 1972-73 Philadelphia 76ers.

It appeared that the "strive for five" might be a successful one for the 4-43 Nets when Devin Harris delivered his 13th assist of the evening on a jumper by Kris Humphries with 2:25 left to put the Nets ahead 91-87. But the Pistons scored on their next three possessions, Harris shot an air ball from 3-point range (although it appeared Tayshaun Prince may have fouled him) with 7.4 seconds left and the Nets down three, and Rodney Stuckey wrapped up the victory from the free-throw line.

Then again, those Sixers actually went on to win four of their next six after improving to 5-58 before losing their final 13.

On paper, this Nets team has the talent to avoid flirting with that dubious record. But Harris, Yi and others have missed extended stretches because of injuries, genuine hope was long ago abandoned, and the atmosphere was so dead Tuesday night -- the announced crowd was a season-low 9,417 -- that you couldn't blame Harris if he decided he didn't want to be associated with what has become the NBA's biggest basket case. Harris didn't say any such thing, but you couldn't help but ask yourself if that wasn't the real reason behind his abrupt departure.

After all, when Harris' parting words include "It's all joy," you can't help but be hyper-skeptical.

The Nets are sinking in the mud, and as every sports fan who's ever heard of Casey knows, there is never any joy in Mudville.

And there certainly wasn't any joy in Harris' voice as he stormed off, an unsettling departure that couldn't have been any more unfitting for a man who historically has been one of the league's class acts.

2. Could Crittenton Still Be Traded?

The NBA players' union announced Tuesday afternoon that Javaris Crittenton will not be appealing his season-long suspension for his role in the now-infamous gun incident in the Washington Wizards' locker room.

One of the reasons he isn't fighting it: It wouldn't be worth the trouble -- and a long arbitration battle might actually prevent Crittenton from resuming his career overseas in a month or two if/when he's fully recovered from the left-foot surgery he underwent in November.

So for now, Crittenton will rehab on his own (he is not allowed to use the Wizards' facilities) and wait to see if the Wizards trade him before the Feb. 18 deadline.

It's an option the Wizards have at their disposal.

I mentioned this in Monday's chat, and it bears repeating: There is no NBA rule prohibiting a team from trading a suspended player, meaning the Wizards could throw in Crittenton's expiring $1.48 million contract to make the salaries match in a trade involving any of their other players.

The acquiring team would then presumably waive Crittenton, and he would be free to ply his trade in Europe or elsewhere overseas after he cleared waivers. (Unlike drug suspensions, a conduct suspension cannot be used as grounds to prevent a player from getting the official letter of clearance needed to play in a FIBA-sanctioned league.)

5. Bosh Goes Off In Loss 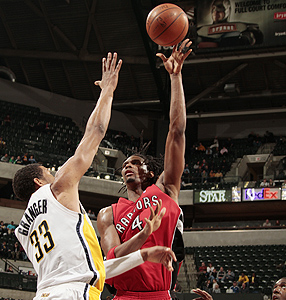 (Ron Hoskins/NBAE/Getty)
Chris Bosh fired in 35 points and grabbed 15 rebounds, but it wasn't enough to keep the Raptors from having their five-game winning streak stopped by the Pacers.

I can't believe people considered missing Monday night's games for the premiere of the final season of ABC's "Lost." Seriously, it's just an overly complicated television show that's trying to cram all the answers to all these questions into its final season. Luckily for you, I chose the NBA on Tuesday and have nothing to share with you about that crazy science-fictional soap opera.

Like, for example, the New Jersey Nets, who are a complete plane crash of a team, being downed by the terrible Pistons. Tayshaun Prince came out of nowhere with a huge dunk for the go-ahead score like a polar bear in the jungle.

Orlando's Vince Carter managed to get off the island he'd been stuck on recently, scoring 17 points on 15 shots and working in the flow of the offense. Dwight Howard was, of course, the solid foundation of this team, unwavering like a giant stone statue of a foot.

Chicago fell off the wagon finally, falling to the Clippers to end a five-game winning streak. This should put the Bulls back in the love triangle of trade discussions about moving Kirk Hinrich.

Indiana's offense was thought dead, but all of a sudden it came back to life and scored 130 on Toronto's horrible defense. But is that really Indiana? Is that their real identity?

Houston seems to constantly be in flux, Tuesday zooming ahead to the future behind Aaron Brooks' 24 points in a beatdown of Golden State. With the way Carl Landry is playing, the Rockets need to go back there time and time again.

Oklahoma City got a huge win over Atlanta as Russell Westbrook, Jeff Green and Kevin Durant combined for 64 points. This team is so much better when it gets even contributions. You know what they say: Live together, die alone.

And of course, there was LeBron James, dropping in 22 points to go along with a career-high 15 assists, 6 rebounds, 1 steal and 1 block in a laugher over Memphis. Man, the way that guy plays sometimes, it's like he's this giant smoke monster that just throws his opponent around like a rag doll.

I wrote about the Spurs' recent spinning of their tires on Monday, but it's amazing how many contending teams I can say the same thing about. The Spurs are a disappointing 8-8 since Jan. 1, but so is Dallas. They have company: Orlando is 10-9 since Christmas, and Atlanta is 10-9 in its past 19 games as well. Phoenix is 15-18 after starting the season 14-3, and Portland is 8-8 since Christmas. Even the Lakers are a very mortal 9-6 in their past 15 contests.

1. Tyreke Evans, Kings: He missed Monday's game against the Nuggets with a sore ankle. His production hasn't slipped since Kevin Martin returned, although the team has dropped nine of 10 with K-Mart in the lineup. (Last week: 1)

2. Brandon Jennings, Bucks: He became just the fourth player to be named the Eastern Conference rookie of the month three times. (The award began in 2005-06.) (Last week: 2)