There is no denying the fact that, so far this season, the Lakers' offense has underperformed. L.A. has only recently cracked the top 10 in offensive efficiency and that only came after strong offensive performances against weak defensive teams: the Knicks, Wizards and Pacers. This is in direct contrast to the past two seasons in which the Lakers ranked third in the NBA in offensive efficiency and were dominant on that end of the floor. So, what's happened?

There are several factors that are contributing to the Lakers' slippage on the offensive side of the ball -- lack of balance in the shot distribution, below-average outside shooting, the integration of Ron Artest and an overall lack of execution. Recently, many critics have been pointing the finger at Kobe Bryant. He's the leader. He's taking the highest percentage of shots on the team. He's not the Lakers' most efficient scorer and he's playing with a busted hand. He should be passing to Andrew Bynum more. He should be making sure they initiate the offense through Pau Gasol. So, it's got to be him, right?

Too many times, the cuts are not crisp. Too many times, screens are not set with any real intent. When player movement stalls, passing opportunities decrease. And when passes aren't there the guy with the ball ends up shooting. Of course, the Lakers could initiate the ball to the post more, but I'm also seeing situations in which post players are being pushed off the block, and that, in turn, ruins spacing and cuts down passing angles. So, it's not as simple as "Player X needs to pass more." This is a team game and the Lakers run the ultimate team offense. The triangle is either a well-oiled machine or a grandfather clock: When one part of the machine is out of synch, the results are going to be poor.

Q: Why hasn't anyone mentioned the possibility that Ray Allen's expiring contract could be turned into a long-term deal on a stud free agent like Dwyane Wade, Chris Bosh, or LeBron James? Ray's salary of $18.8 million is a pretty sizable contract to be able to offer those guys, no? Maybe I'm missing something with the Celtics' cap situation, but it would seem to me that they could slot one of those guys right in. I'd imagine that even if they got more money elsewhere, they'd play with Garnett and Pierce for the chance at a championship. -- Scott (Vallejo, Calif.)

A: We'd need an entire mailbag to explain all the moving pieces of the NBA salary cap and, heck, we won't profess to be experts on it yet, either. (The collective bargaining agreement is daunting.) But, in a nutshell, it's not as simple as clearing Allen's salary and reappropriating it on another player. Remember, Boston has already committed $62.2 million (including Pierce's $21.5 million player option) for seven players (Boston is spending $85.2 million this season). Due to Larry Bird Rights, the Celtics can go over the salary cap to re-sign Allen, but wouldn't have the ability to add a similar contract (especially one that would likely require a max deal).

Q: Do you see the Celtics making a move before the trade deadline to acquire a power forward to relieve Kevin Garnett? -- Josh (Wayne, Mich.)

A: The Celtics have always shown a desire to solidify their frontcourt for the home stretch, and P.J. Brown played a monster role during the championship season of 2007-08 (and we all saw how much the Celtics struggled in the postseason without injured Leon Powe adding depth there last season). Given Shelden Williams' fall from the rotation, it would seem Boston would keep their eyes open for a cost-efficient, defensive-minded forward to slot behind Rasheed Wallace, Glen Davis and Brian Scalabrine. 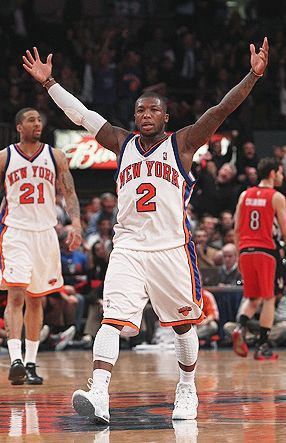 More than a month after being benched for 14 straight games, Nate Robinson reportedly will be the Knicks' starting point guard on today at MSG.

• The Bulls are one of the hottest teams in the NBA right now, winners of nine of their past 13 games. Since Jan. 9, they're tied for the second-best record in the Eastern Conference, trailing only the Cavs.

• The Nuggets have a terrific home record (.846 winning percentage), but a terrible road record (.478). The Nuggets are 22-3 at home this season, the second-best home record in the NBA behind the Lakers (23-3).

Will Howard Stay In Dallas?

DALLAS -- Coach Rick Carlisle wants to get something on the record: He wants Josh Howard and thinks the Dallas Mavericks need him.

Will that stop the trade rumors circulating the Mavs' struggling swingman? Certainly not.

Especially not with team owner Mark Cuban acknowledging that there is reason for Howard to be uncertain of his immediate future with the Feb. 18 trade deadline looming.

Don't mistake that for Cuban being eager to wash his hands of Howard, whom the owner has consistently supported through the roller coaster that has been Howard's recent career, on and off the court. Cuban said he hopes to answer questions later this season about how pleased he is that he didn't pull the trigger on a Howard trade.

That would require two things to happen: (1) The Mavs not to get a trade proposal for Howard that makes sense for a franchise determined to be contenders; and (2) Howard to snap out of the worst slump of his career.

Howard provided hope for the latter in Wednesday night's 110-101 win over the Golden State Warriors, which snapped a season-worst three-game losing streak. The 19-point performance, which used to be an average night for Howard, came hours after he was quoted expressing frustration about his role as a reserve and uncertain future with the franchise.

"I don't know if my time is up here, but I still have a [load] of talent to offer," Howard told NBA.com. "Only playing half a season last year and only [28] games this year, I've got my legs. I know I'm going to get picked up regardless. That's not even a concern.

"With how things are being handled here right now, all I can do is roll with it."