1. Transitional Night For Knicks And Bulls

NEW YORK -- Did you hear the one about the three ex-Knicks who went out to dinner Wednesday night after the New York-Chicago game?

Funny thing was, two of them -- Nate Robinson and Jared Jeffries -- were not quite ex-Knicks just yet.

The third member of that dinner trio was Malik Rose, who was a member of the New York Knicks exactly one year ago before he was shipped to Oklahoma City a few hours before the 3 p.m. trade deadline.

Robinson, Jeffries, Larry Hughes and Jordan Hill were expected to join the legions of ex-Knicks on Thursday, as was Brian Cardinal, who only became a Knick on Wednesday when he was acquired for Darko Milicic but was expected to be waived in the morning to clear a roster space for New York's next trade.

Put on your GM hat and make your own trades and deals.
Trade Machine

As of Wednesday night, Knicks president Donnie Walsh had at least two deals in the pipeline -- a complicated one sending Robinson to Boston, and a much bigger pending one in which Hughes, Jeffries and Hill were expected to be packaged with one or two draft picks in a deal with Houston for Tracy McGrady.

But early Thursday morning, ESPN.com's Marc Stein reported that McGrady will be included in a deal in which Sacramento will send Kevin Martin to Houston, with the possibility remaining that McGrady ultimately would end up going to the Knicks before the deadline at 3 p.m. ET.

One complication arose during the Bulls game when Jeffries played only six minutes before exiting with a hyperextended right knee, but coach Mike D'Antoni said the injury was merely an aggravation of an old ailment, and that Jeffries should be able to play Saturday.

The endgame for New York is not acquiring McGrady, but clearing enough salary-cap space to make a push for a second max-level free agent once they extend their max offer to LeBron James on July 1; freeing themselves of Jeffries $6.9 million salary for next season would enhance their options significantly -- including giving them a chance to retain David Lee should they fail to obtain Chris Bosh in a sign-and-trade with Lee as the primary outgoing piece.

The Bulls also want to be major players in this summer's free-agent market, and they took a huge step toward getting there by agreeing to send John Salmons to the Milwaukee Bucks for the expiring contracts of Kurt Thomas and Francisco Elson (although a source cautioned that the trade could be "expanded," Salmons would still end up on Milwaukee's roster as the new starting two-guard.)

"We're seeking the flexibility and long-term ability to get pieces to add to the core of young players we're developing, and guys understand that," Bulls coach Vinny Del Negro said after his team rallied from a 15-point deficit to defeat the Knicks 115-109.

The Salmons trade removes $5.8 million from the Bulls' 2010-11 cap obligations, putting them in the same league with the Knicks, Heat and Nets as teams with the most money to spend on free agents this summer. But the Washington Wizards and Los Angeles Clippers have joined that field too, with the recent trades of Caron Butler and Antawn Jamison (by Washington) and Marcus Camby and Al Thornton (by Los Angeles). The line of limousines at the foot of James' driveway in Akron, Ohio, could be fleet-sized by the time 11:59 p.m. rolls around on the night of June 30.

So on a night when soon-to-be ex-Knicks and actual ex-Knicks (including Charles Oakley, Rod Strickland, Charles Smith, Allan Houston and Pete Myers) were all over the building, it really wasn't all that surprising to hear this doozy whispered in my ear: Al Harrington was being shopped, too, and there was a chance he'd end Thursday as a member of the Bulls -- a team the Knicks tried and failed to defeat for the second consecutive night.

"I feel optimistic about some of it, not all of it," Walsh said. "I've done this too long, and it can be over in a minute. In any of the trades I'm in, that's the way I feel about it."

In a matter of hours, he'll know for sure.

Now that the Cleveland Cavaliers have made their big trade, all eyes turn to Phoenix to see what the Suns will do with Amare Stoudemire.

Two sources told ESPN.com that the Suns called the Cavs this afternoon and told them they had decided against sending Amare to Cleveland. A few hours later, the Cavs had completed a deal for Antawn Jamison.

That leaves the Miami Heat as the only known suitor for Amare. One source close to the process disputed what a Suns source told me earlier today about Miami's reluctance to give up draft picks for Amare. The Heat own the Raptors' and their own first-round draft picks this year.

"The Heat have offered a pick," the source said. "I think this comes down to, will they offer their second first-rounder, as well?"

The question is, will the Heat offer more now they know their biggest competitor for Amare is out of the picture? Remember, the Heat can sign him straight up as a free agent this summer without giving up either pick.

If the Suns balk at making a deal with Miami, chances are they're keeping Amare. The only other potential suitor may be the Chicago Bulls. A source said the Bulls expressed interest in Amare earlier in the week, but they've been quiet on the Amare front since then.

If the Suns can't make a trade before Thursday's deadline, expect Amare to be unhappy.

"He's going to be upset," one source familiar with the process told ESPN.com. "He's been reading his name in the headlines every day. He's been wooed by Dwyane Wade and LeBron. It's time to move on."

4. The Moment Has Arrived For The Clippers

He's in an office somewhere with all sorts of cell phones buzzing and whirring as the NBA trade deadline approaches. Hardly a historic or fitting venue for such a moment.

But Mike Dunleavy and the Clippers may have just arrived. Not on the scene. Not even as a contender just yet. No, their blood is still red, not blue.

Arrived, at their moment.

The trades Dunleavy and his front-office staff have artfully engineered over the past two days have put the long-suffering franchise in position to exorcise nearly three decades of mostly ineptitude and crushing irrelevance since moving to Los Angeles in 1984.

To rebrand and reinvent themselves.

To dream the almost impossible dream of signing LeBron James, or one of the other elite free agents who will hit the market July 1. 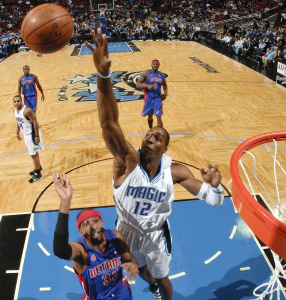 (Fernando Medina/NBAE via Getty)
Dwight Howard reminded the Pistons why he is the league's top big man, dominating the visitors to the tune of 33 points, 17 rebounds and seven blocked shots in Orlando's 116-91 win.

The Spurs escaped Indiana with a 90-87 win in which Tim Duncan pulled down 26 rebounds, but made only four of 23 field goal attempts. Duncan was the first NBA player to collect 25 or more rebounds while missing at least 19 shots from the floor in a non-overtime game since Boston's Dave Cowens did that on March 20, 1973. Duncan's 19 missed field goal attempts matched his career high for a regulation game (9-for-28 on Feb. 20, 2004, at Cleveland). He missed 23 shots in an overtime loss at Toronto on Feb. 7, 2002.

• Andray Blatche scored a career-high 33 points and grabbed 13 rebounds as the Wizards defeated the Timberwolves in the wake of Antawn Jamison's departure from Washington. Blatche has per-game averages of 16 points and eight rebounds in 10 games without Jamison this season, compared to 7.6 points and 4.5 rebounds in the 40 games that both he and Jamison played.

While the allure to make a move at the trade deadline can be irresistible to some teams, there is one pretty substantial deterrent: The deadline is so late in the season that new acquisitions have to integrate on the fly, learning schemes and getting to know their new teammates while trying to keep to their usual routine.

But there's a fairly simple way to expedite the introductory process: Play against one of the worst defenses in the league.

After a loss to the athletic, dynamic Oklahoma City Thunder on Tuesday night, the Dallas Mavericks tipped off Wednesday against the Phoenix Suns, the proud owners of the league's second-worst defense in terms of efficiency. The Suns push the pace for a reason: Their roster is so obviously geared toward racking up points that Phoenix is best served by launching an all-out attack. It's not that the Suns don't try on defense; they're just not very good.

The Mavericks were all too aware of the Suns' defensive troubles, and looked to push the ball themselves to take advantage of poor transition coverage. The result was a 56-point first half in which the newly christened Mavs, Caron Butler and Brendan Haywood, played pivotal roles. Both Butler and Haywood have a long way to go before they're fully functioning members in the Mavs' system, but that didn't make them anything less than vital in what ended up a 10-point victory over the Suns: Butler scored 15 and milked his midrange game, and Haywood pulled in a near double-double with 10 points, nine rebounds and five blocks. Their production wasn't jaw-dropping, but for the first time, Butler and Haywood looked like they belonged. It's impossible to pin down exactly what the future holds for these Mavs, but in their first two games they've shown the potential to be significantly improved on both sides of the ball.

To check out the The Two Man Game blog, click here.