Apparently, the costume brought him into character, because he broke into an improv act. His voice was an elaborate mix: two parts Prince Akeem from "Coming to America," one part Hugh Hefner and add in a twist of a Jamaican accent.

Howard, or whoever this character Howard was pretending to be (it really was almost like Andy Kaufman morphing into Tony Clifton) was asked about Matt Barnes' defense on Kobe Bryant in Orlando's thrilling 96-94 win over the Lakers on Sunday.

"Did I like seeing, what, physical play?" the center said. "Matt plays physical every day. Every game, Matt is a physical baller. That's what he does, he brings physicality to the game. Physi-cality. Matt and physical go together ... Matt-sysical."

While Howard was busy creating characters and making up words, Barnes created a wrinkle to Orlando's identity that the Magic's gentle giant goofball hasn't been able to provide in his six seasons with the team and probably never will: a mean streak.

Barnes, known primarily as a shooter in the first six years of his career with six different teams, is in his first season with Orlando after signing a two-year deal last summer for a scant $1.6 million per season. But it was his defense that made you wonder how different last year's Finals could have been if the Magic had him on the floor rattling the Mamba's cage.

While Bryant scored 34 points Sunday, he shot just 12-for-30 from the field in doing so, the last of those misses coming with 1.2 seconds left from 20 feet out over Barnes' outstretched arms.

Barnes guarded Bryant closely and got under the All-Star's skin, baiting Bryant into his 12th technical foul of the season in the third quarter, and also came up big on the offensive end, making the Magic's biggest shot of the day with a 3-pointer to put Orlando up 93-87 with 1:10 remaining just a possession after guarding Bryant on a 3-point miss that would have tied it.

"It's that time of year, it's good to get a little chippy," Bryant said before adding that Barnes' play, which included swinging his knees into Bryant's upper body after a made dunk and later faking a pass right at Bryant's face on an inbounds play was, "entertaining."

"It is entertaining," Bryant said again, before adding, "There was a lot of bumping going on. I've played with teams that were more physical. Matt Barnes is physical in terms of putting hands on me and things like that, but him bumping me and Kenyon Martin bumping me are two different things."

While Ron Artest dyed his hair yellow and had the word "defense" painted in purple in Hebrew, Japanese and Hindi, it was Barnes who really had the greatest homage to Dennis Rodman on Sunday by the way he got into his opponents' heads.

After the game, a pack of reporters asked Artest, the Lakers' resident expert on defense, what he thought about Barnes' efforts versus Bryant. Lamar Odom, who was changing at a nearby locker, heard Barnes' name come up and shouted to nobody in particular that Barnes was a "monkey" and added, "He picked the right game to act tough."

"[Barnes] was an action figure today," Odom said, this time directly to the media several minutes later after he was dressed. "He was really involved and really into the game. It's too bad we are not going to see him again [in the regular season]."

Odom's comments dripped of sarcasm and he wasn't done there, later saying Barnes didn't accomplish anything but that he got the crowd into the game.

"Ric Flair does the same thing," Odom said. "He had his wrestling gear on today. All he needed was, like, a cape and tights."

(When asked to clarify the "monkey" statement, Odom said that it was an allusion to the feud between Rick Ross and 50 Cent and an inside joke between the Lakers. "Matt Barnes is a cool dude," Odom said. "If I call him a monkey, I don't mean it.")

Barnes wasn't wearing any tights (thankfully the NBA banned those atrocities after the 2005-06 season), but he did walk the tightrope between instigating and imploding his team's chances. He got tangled with Derek Fisher with 43 seconds left when the Magic had possession and a four-point lead. If he had been whistled for a technical foul there, he would have been tossed from the game (he got T'd up along with Bryant earlier) and the Lakers would have received a free throw with a chance to make it a one-possession game.

"If I get in trouble or get a technical, than I am hurting the team," Barnes admitted, but when he brings the intensity just enough as to control the frenzy, he gives the Magic an edge that it was missing before.

Said Orlando coach Stan Van Gundy: "The thing with Matt is, you know he's going to battle. He's going to get up and try."

If the "Matt-sysical" Magic keep playing like they did on Sunday, they could start playing the part of Finals favorites rather than just Finals contenders.

Dave McMenamin writes about the Lakers for ESPNLosAngeles.com.

2. Nuggets Trying To Catch The Lakers

DENVER -- For one night, the Nuggets caught a break, facing just the team they needed to see as they await word -- possibly coming Monday -- on whether forward Kenyon Martin will require knee surgery.

If there's one team you can afford to face without one of your top big men, it's Portland, already down Greg Oden and Joel Przybilla and currently missing Marcus Camby. The Nuggets rode a 42-26 points-in-the-paint advantage to their 118-106 victory over the Trail Blazers, and that has coach George Karl forecasting what it will take to remove the element of fortune and take control of their future.

"I think the big thing is to have a double-digit win March," Karl said. "I think come April 1, you'll kind of know what you have to do. I don't think anybody's going to figure it out until April 1. But we've got to get 10 wins or more in [March]. If we do that, I think they'll be some great games in April before the playoffs."

The Nuggets have already won three this month, with 12 left to play until it's time to flip the calendar page. The Nuggets have won two-thirds of their games this season, and if they continue at that rate for the rest of the month, they'll get to 50 victories with seven left to play.

Denver is within reach of the Lakers for the No. 1 seed in the Western Conference, sitting 3½ games behind Los Angeles and a half-game behind the surging Dallas Mavericks.

Another number that's hard to ignore is what Arron Afflalo and the Nuggets have done to the last two All-Star shooting guards they've faced. Kobe Bryant and Brandon Roy shot a combined 6-for-31 against Denver on the past two Sundays.

The wingmen they've got covered. Now it's a matter of finding out just how strong the Nuggets will be in the frontcourt, or whether their inability to land another big man before the trade deadline will come back to get them.

4. Young Grows Up Against The Raptors

Thaddeus Young set a career high with 32 points and 19-year-old Jrue Holiday added 21 points in the 76ers' 114-101 victory at Toronto. It was the second 20-point game this month for Holiday, who erased Young's name from the Sixers' record book with 23 points against the Magic last Monday. That was the highest point total ever recorded for the Sixers by a teenager. The previous mark was 22 points by Young against the Bucks two years ago.

6. No Answer For Carmelo 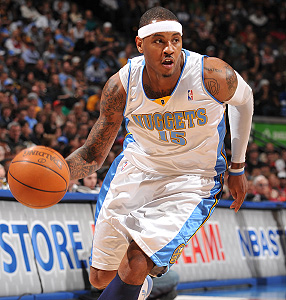 (Garrett Ellwood /NBAE via Getty Images)
The Blazers couldn't come up with a way to slow down Carmelo Anthony, giving up 30 points to the Nuggets' forward in a 118-106 loss in Denver.

8. Saunders Not Happy With Wiz

BOSTON -- Wizards coach Flip Saunders has let his displeasure with his team be known on several occasions this year, but even by his recent standards this postgame press conference was a doozy. After Washington blew a 13-point lead in the final six minutes and lost to the Celtics 86-83 on Sunday night, Flip let fly, and one wonders if it signals a disconnect between Saunders and emerging forward Andray Blatche.

"We choked," he said. "Six minutes to go, we're up 13. We start talking at [Kevin] Garnett, we start talking trash and everything else, we got Garnett juiced up and we just pissed on our leg the last six minutes. Instead of letting a sleeping dog lie, we juiced up their energy."

The Wizards scored only four points in their final 13 offensive trips, and one of the baskets was a fortunate coincidence after a deflected Randy Foye pass ended up in JaVale McGee's mitts for a dunk. Boston noticeably dialed up its defense, as Rajon Rondo increased the ball pressure on Foye while Garnett and Paul Pierce denied entry passes to Blatche and Al Thornton, respectively. Those two combined for 47 points but had none in the final six minutes when the Wizards' offense fell apart.

Saunders was infuriated that his young charges couldn't keep their composure, and felt Blatche was particularly unwise in talking to Garnett -- who limited him to two missed shots and a turnover in the last six minutes.

"Randy had bad decisions, 'Dray had terrible decisions. 'Dray's woofing the whole time at Kevin Garnett. You can't do those things. He had 23 points with six minutes to go [but] he didn't piss a drop the last six minutes." (Except, one presumes, for the portion that went down his leg above).

Blatche disagreed with Saunders' opinion -- he felt Garnett was stepping over the line with his trash talk and was just defending himself. He's certainly not the first player to register displeasure with Garnett's on-court vocal antics.

"I was defending myself as player," said Blatche. "I'm a man just like he is. A man is talking to me this close to my face, I'm going to say something back. He has to respect me just like I respect him."

"I could feel his lips touching my cheek," he added, emphatically. "I wasn't bragging, I was just saying back up."

Regardless of his choice of metaphors, one assessment by Saunders rings true -- the Wizards lost their composure. On a night when neither Garnett (0-for-7, four turnovers) nor Nate Robinson (0-for-3, but weirdly selected for the in-arena postgame interview) made a basket, the game was there for the taking until Washington's offense melted down late. It was the most attempts without a made field goal by Garnett, with the previous high coming on Jan. 27, 1996, against New York (in his rookie season with Minnesota).

Celtics coach Doc Rivers stressed to his team that Ray Allen had the potential for a big night before Sunday's game. It took the better part of three quarters to get him going, but Allen produced timely shots for the Celtics.

Allen scored 18 of his game-high 25 points after the intermission, hitting 4-of-6 shots for 10 of Boston's 24 third-quarter points; then, he hit 3-of-4 shots (including a pair of monster 3-pointers) in the final two minutes to lift Boston in the final frame.