LOS ANGELES -- It says something -- something far from good -- that the Lakers beat the Toronto Raptors thanks to yet another game-winning shot by Kobe Bryant. It says even more that the defensive play of the game was made by a man named Lapo Elkann.

Elkann isn't a D-League player the Lakers brought up on a 10-day contract. He's a man who was sitting in his cousin's courtside seats. And with the Lakers ahead by four points and a ball heading out of bounds on their defensive side of the court, Elkann put both of his hands in the air, then knocked the ball off Toronto guard Jose Calderon's head before Calderon could save it. The ball landed out of bounds, last touched by a Raptor, possession awarded to the Lakers, who went on to win 109-107.

"Tough play, because it was a two-point game," Calderon said. "I was looking to pass to my teammate. I wasn't looking, and I look back and the guy just hit the ball."

Elkann offered an apologetic shake of his hand to Calderon. Ron Artest came over, patted Elkann on the head, and told him, "Good D."

Elkann truly was sorry he hurt the Raptors.

"Having two Italians [Andrea Bargnani and Marco Belinelli] on the team and being Italian, I wished for them to win," Elkann said. "I saw the ball coming on me, and I pushed it."

"I'm not an expert in basketball," he said, explaining his ignorance of the rules. "I know more about soccer than I do about basketball."

He pulled up his sleeve to reveal a tattoo of the Juventus Italian football club logo. But if he's a soccer guy, he should know you're not supposed to use your hands.

"You can't," Elkann said. "The only one who's allowed to use them is Maradona, in the World Cup."

So now the Lakers have their own "Hand of God" play. There's nothing heavenly about them lately, evidenced by their need to be bailed out by a once-in-a-lifetime fluke play from a fan and a nearly twice-a-month shot by Bryant, who has hit seven game-winning shots this season.

The Lakers narrowly avoided their first four-game losing streak since April 2007. They let the Raptors shoot 51 percent and score 58 points in the first half. The Raptors, not known for their inside play, outrebounded the Lakers 44-40, and nearly matched them in points in the paint (44-38, Lakers). The positives were so scant for the Lakers that in the final minute coach Phil Jackson noticed the Raptors had 102 points on the scoreboard and joked with his coaching staff that the Lakers had held them below their season average (104.2).

That lasted only a few seconds, after Calderon went baseline for a layup. And after Lamar Odom made only one of two free throws, the Raptors capitalized on yet another defensive breakdown by the Lakers; when Pau Gasol stayed with the dribbler and Derek Fisher didn't jump up to the screener, Chris Bosh drilled a 3-pointer to tie the game with 9.5 seconds remaining.

That forced another clutch shot from Bryant, who slipped away from a double-team, dribbled toward the baseline and pulled up for a 17-footer that dropped with 1.9 seconds remaining.

"We scored a lot of points tonight," he said. "That's not going to win championships. You've got to stop people. We didn't do a good job of that tonight."

The Lakers aren't doing much that would result in a championship right now. They don't even have championship swag.

"We've got to start building on our confidence and our rhythm out there and really step it up," Gasol said. "So far we've been struggling. We've played well in stretches but not consistently."

If they're going to repeat, they've got to find a defensive identity. If not, they need to get a permanent seat for Elkann along the sideline.

2. What's Next For The Clippers?

When the Los Angeles Clippers relieved him of his head-coaching duties nearly five weeks ago, Mike Dunleavy conceded that his team needed to hear from a fresh voice. Dunleavy moved upstairs in his role as general manager and readied himself for the trading deadline and the June draft. He took a bow after the Clippers were able wipe $5.5 million off the books at the deadline to put themselves in position to extend a massive contract in the 2010 free-agency chase, and scheduled scouting trips to get an up-close look at this year's crop of college talent. Dunleavy was slated to be in Greensboro this weekend to catch the ACC tournament. On Tuesday, those plans came to abrupt halt as the organization completely disassociated itself from Dunleavy. Clippers assistant general manager Neil Olshey will assume the position of GM.

4. A Night To Remember For Jones

Dahntay Jones led both teams with 25 points in the Pacers' 107-96 win over the 76ers on Tuesday night. It was the first time in Jones' 387-game NBA career that he was a game's high scorer in a victory for his team. 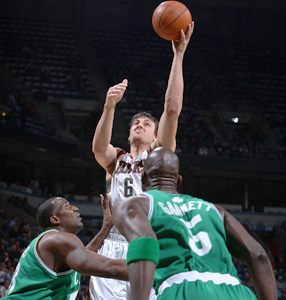 8. Bucks Not An Easy Opponent

If the NBA season ended today, the Boston Celtics would (barely) hold the third seed in the Eastern Conference. It's a spot they'd be well-served to be holding when the season actually ends in a little more than a month.

The Milwaukee Bucks -- the team that stood nose-to-nose with Boston on Tuesday night in Milwaukee and emerged with a gritty victory -- have surged to the fifth seed in the East and would be in line to meet the fourth seed in the opening round of the playoffs.

That's a spot where the Celtics could very easily find themselves sitting when the 2009-10 season ends on April 14. While Boston currently holds a one-game edge in the loss column over the Atlanta Hawks (having played one fewer game), Atlanta holds the tiebreaker after sweeping Boston during the regular season.

1. Aaron Brooks, Rockets: He leads the league in 3-pointers made with 156. So much for Kevin Martin slowing him down. Brooks has averaged 23.8 points, 6.0 assists and 3.4 rebounds in his past five games. (Last week: 1)

2. Josh Smith, Hawks: I have to ask again, why wasn't this guy an All-Star? He scored a season-high 29 points Friday against the Warriors and has averaged five assists in his past five games. (Last week: 2)

3. Marc Gasol, Grizzlies: The rugged big man has posted double-doubles in five of his past six games and, along with Zach Randolph, is the main reason Memphis has been one of the league's top surprises. (Last week: 4)

4. Carl Landry, Kings: The power forward has changed uniforms, but his level of play hasn't slipped one bit. In nine games with Sacramento, he is averaging 17.7 points, 7 rebounds and 1.2 steals. (Last week: 3)

5. Corey Brewer, Wolves: His franchise record of consecutive games with at least one 3-pointer is now at 28. He is averaging career highs in points, rebounds, assists, steals, blocks and shooting percentage. (Last week: NR)