1. The Orlando Magic's One Major Flaw

While watching the Magic clobber the Bulls by 29 points on Thursday for their seventh consecutive victory, I started thinking about the differences between this season's Orlando team and the one that reached the NBA Finals a year ago. What stands out to me is the fact that the Magic might struggle in the playoffs without Hedo Turkoglu around to initiate the offense. Yes, he is playing poorly in Toronto, but he was Orlando's top player in the playoffs last year. He was their best playmaker.

In the playoffs, when teams crank it up on defense, you need guys who can create on their own. You have to be able to create off the dribble. I don't see many guys on the Magic who can do that.

For example, Vince Carter had 25 points against the Lakers a few days ago, but he had only one assist. Jameer Nelson is healthy, which obviously is a plus, but he is not a high assist guy. Go down their roster, Mickael Pietrus, J.J. Redick, Matt Barnes -- they just don't have a lot of creators, and that could be a potential problem.

For whatever reason, it just hasn't worked out for Hedo with the Raptors. He is averaging only 12 points per game and has had nights when he has made only one basket or gone scoreless. That is a big drop-off from last season, when he was terrific and easily could have been an All-Star.

Vince basically replaced Hedo in the lineup. While he is getting 16 points a game, he is averaging a little less than three assists. He is much-maligned for settling for too many jumpers and not getting to the free throw line often enough. He is in a different role than he is accustomed to because he isn't the No. 1 option in Orlando. Vince can play, but he is a different player than Hedo.

Orlando (46-20) has the second-best record in the East because Stan Van Gundy is an outstanding coach and the Magic play really good defense. Everyone knows Dwight Howard is a terrific defender, but overall they play quality team defense.

Howard has taken a big step forward offensively from where he was last season. Last season, he was mechanical and his moves seemed preconceived. Now he is reading defenses and making better plays. When he is successful down low, it opens up the 3-point shot. Orlando is a jump-shooting team first due to the lack of playmakers.

The Magic aren't the Rockets of 1994-95. Houston would dump the ball down to Hakeem Olajuwon and you had to double-team. That isn't an automatic yet when Dwight gets the ball. If a team uses its 18 fouls from the center position on him, they can slow down the Orlando offense, and that is where I see a potential problem.

In the East, I believe Cleveland will be the 1-seed and Orlando the 2-seed. I wouldn't be surprised to see the Magic get through the East, but I feel that they are a different team with Hedo gone. In a seven-game series, I think Cleveland has the edge, especially now that the Cavaliers have added Antawn Jamison to the mix.

The Cavs got Jamison to beat the Magic. Last season, Cleveland won 66 games and everyone thought it was going to be a LeBron James versus Kobe Bryant Finals, and then the Magic came out of nowhere to pull off the upset. With Jamison in town, Cleveland has another viable option in the half court, and defensively the Cavs now have someone who can chase Rashard Lewis as well as defend down low.

2. The Start Of A New Chapter

Rev. Al Sharpton, Mayor Michael Bloomberg, Gov. David Paterson, Jay-Z and Beyonce were all in attendance at an event, and it wasn't for a celebrity birthday or some political event. All of these very important people were on hand for the groundbreaking ceremony of the Barclays Center, the arena in Brooklyn where the Nets will soon be playing their home games.

While most of the political figures were there to talk about the number of jobs being created from the Barclays Center, what I took away from the ceremony was excitement and hope, something that hasn't been synonymous with Nets basketball for quite a while. It is tough to say as a Nets fan from the area, but the Nets in New Jersey just doesn't work. The facility (more specifically, the Izod Center) is bland, and it is in an area where you can't get people in it. That's going to change in Brooklyn, where fans are going to be able to use mass transportation to get to the arena. With Brooklyn being packed on a nightly basis, what free agent wouldn't want to play for the Nets?

That brings up another point -- with the Nets' move to Brooklyn now official, it is just another asset the Nets can use to try to attract free agents (in addition to the cap space, draft picks and solid young core). Think about it. How many players can say they brought professional basketball to a city? Potential free agents are going to look to Oklahoma City and see what Kevin Durant is doing not only for a team, but for an entire city, and are going to want that. When some guys in suits with hard hats on sprinkled dirt on the ground, it signified a new chapter for the New Jersey -- excuse me -- Brooklyn Nets.

To read more from Pruiti, check out his blog NetsAreScorching

4. Instant Offense Off The Bench

Jamal Crawford came off the bench to score a team-high 29 points for the Hawks in their win at Washington. Crawford is averaging 17.5 points even though he's been a substitute in every one of his 63 appearances this season. Over the last 40 years, only one NBA player has been used as a sub in every game and finished with a higher average than Crawford has posted this season: Ricky Pierce of the Bucks in 1989-90 (23.0).

6. Saving Their Best For Last 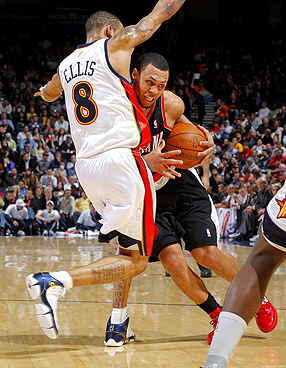 (Rocky Widner/NBAE via Getty Images)
Brandon Roy and the Blazers trailed by as many as 16 before outscoring the Warriors by 18 in the fourth quarter on the way to a 110-105 road win.

• Crawford, Hawks hold off the Wizards

8. Rose Injured In Loss To Magic

Not only did they get crushed by the Magic, as expected (111-82) -- they also lost point guard Derrick Rose for the night, and maybe for longer, when Magic center Dwight Howard bodychecked him late in the first quarter for the second time in just over a month. Rose has a sprained wrist and is scheduled for an MRI in Miami on Friday. The play literally added injury to insult considering the Bulls were already playing without Joakim Noah (plantar fasciitis) and Luol Deng (strained calf).

The one player they could least afford to lose was lost.

"We're a different team than what we were," frustrated coach Vinny Del Negro said after the game. "From our injuries, to the trade, to everything involved, we're without a lot of our guys. I thought the guys in the second half battled. There's no excuses, it is what it is."

Most NBA teams sell themselves to fans as a good night out.

The Minnesota Timberwolves, on the other hand, are selling themselves as a good upcoming half-decade or so. They aren't making any promises about tonight. Consider, for instance, some recent Timberwolves sales materials.

New basketball boss, new coaches, new players, new hope. And just when you thought the season was winding down, we're really cranking things up: a 2010 draft with two -- or possibly even three -- first-round draft picks, and massive cap room for this summer's free-agency market.

Combine that with being one year closer to Ricky Rubio and maybe signing European big man Nikola Pekovic, and you have a recipe for another exciting offseason.

Pekovic, currently playing for Panathinaikos, is part of the sales pitch -- yet not one current member of the Timberwolves is. Could it be any clearer that this team is positioning itself for the long term?