EAST RUTHERFORD, N.J. -- It is a dubious distinction that Jamal Crawford has dragged around with him for the past three years, carrying the honor (or, better yet, dishonor) of having played the most career games of any active NBA player without ever having appeared in a playoff game.

That streak is on the brink of extinction, even though Crawford's other streak -- 65 consecutive games coming off the bench -- is likely to carry over into next season.

"I like Jamal where he is right now. I mean, he's doing just fine for us, leading the league in scoring off the bench, and our team has been pretty successful," Hawks coach Mike Woodson said after Crawford's 25 points on 11-of-18 shooting led the Atlanta Hawks past the New Jersey Nets 108-84 on Tuesday night.

"So he won't be in the starting lineup."

If ever there was a night when circumstances called for Woodson to insert Crawford into the starting five, it came Tuesday at the Meadowlands against the NBA's worst team as Joe Johnson (Achilles tendinitis) sat out for the first time this season.

But Woodson chose to insert rookie Jeff Teague into the starting unit and move Mike Bibby over to shooting guard, sticking with the axiom that if it ain't broke, don't fix it.

Crawford responded by providing his usual fix of offensive explosiveness off the bench, scoring 15 of his points in a brief burst at the end of the second quarter as Atlanta closed the first half with a 19-5 run to take control for good.

Crawford closed the quarter with a 29-foot 3-pointer that he knew would be good from the moment the ball left his hand. The only disappointment for Crawford was that he didn't get to try for his eighth 4-point play of the season, which would have added to his career total of 26 (also tops among active players).

"I told Mike [Bibby] if he gave it to me, I would make it for him. I kind of visualized it before, and they were screaming at [Kris] Humphries to try to take a foul, so I was going to get it off before he got me for a foul," Crawford said.

There are arguments to be made in favor of Anderson Varejao of Cleveland, J.R. Smith of Denver, Lamar Odom of the Lakers and a few others for the NBA's Sixth Man Award, but Crawford's consistent production -- as the added weapon in Atlanta's improved arsenal -- makes him the odds-on favorite to wind up with that trophy.

Crawford (17.6 points per game) leads the league in scoring among players who have not started a game, and his team is now 20 games over .500 and trails the Southeast Division-leading Orlando Magic by only two games in the loss column. (Orlando, however, already owns the tiebreaker with a 3-0 lead in the season series, with the final Hawks-Magic game set for March 24.)

So a No. 2 seed is not entirely out of the question for the Hawks, and Crawford will finally get a chance to step onto the stage that has eluded him through an NBA career that spanned nine losing seasons with dreadful teams in Chicago, New York and Golden State.

If Crawford plays in Atlanta's remaining 16 games, his no-postseason streak will end at 678 games -- 56 shy of the NBA record set by Shareef Abdur-Rahim before he played in a postseason game for Sacramento in 2006.

Adonal Foyle (593) held the active-player distinction until the 2007 playoffs, and Crawford has been atop the list ever since.

Next fall, Troy Murphy (606 and counting), Mike Dunleavy (551), Eddy Curry (511) and Chris Wilcox (482) will be the ones answering questions about what it feels like to have played for so long without ever having had a taste of the postseason. (Kudos to the Elias Sports Bureau and ESPN Research for those tallies.)

"I felt it earlier this season: This is what it must be like, playing in Boston, Cleveland and Orlando, but now it's pretty much out of my mind," Crawford said. "I always said the thing that bothered me the most about it was the fact that I actually hadn't experienced the big games in front of the crowds like that.

"I just think on that stage I'm at my best, and in pressure situations I do really well."

For the first time ever, one month down the road, Crawford will have a chance to back up that boast in a best-of-seven series.

Just don't expect to see him out there when the ball goes up for the opening tip.

As Woodson said, one of Crawford's streaks is certain to remain intact.

While the great Nate Robinson debate is far from over, nearly halfway into the experiment it's time to check in. Before delving into the numbers, it's safe to say that from the onset this trade was a win-win for both sides. The Celtics traded an aging one-dimensional scorer, Eddie House, for Robinson, an explosive, high-energy player. Essentially, both sides got what they wanted. The Celtics got younger and more athletic while the Knicks got a guy they did want for a guy they didn't.

The argument stands that both sides benefited from this deal, but based on the on-court production so far, the Celtics have come out on top. In 12 games with the Celtics, Robinson is shooting 49 percent on 3s and 42 percent from the field overall. House, on the other hand, is shooting 24 percent from deep and 34 percent overall. It's obvious that things like the small sample size, along with getting acclimated to a new role and a new system, have been factors for each player. Robinson's transition has been understandably easier. Since coming to Boston, Robinson has been playing nearly eight minutes fewer per game, compared with House playing nearly five minutes more per game than he did in Boston.

Interestingly enough, both players are asked to do the same thing on their new teams: score. Celtics coach Doc Rivers has made it abundantly clear that he wants Robinson to be more aggressive and that his major role on this Celtics' team is to be an offensive boost off the bench. So far, so good.

It's obvious that the expectation for each team differs. House is playing more minutes while producing less for a team that is not making the playoffs. In the long run, House's stamina and production do not matter. Robinson is playing for a team that has high aspirations for both him and for the overall outcome of the season.

The ultimate success or failure of this trade has yet to be realized and will be contingent on how far and how much Robinson has contributed to that end. Regardless of the outcome, as it stands right now, Boston fans are drinking the "Natorade," and watching Robinson get fed off-the-glass alley-oops from Tony Allen only keeps the fans thirsty.

To read more in the Celtics Hub blog, click here

4. Suns Run Up The Score

The Suns scored at least 35 points in each quarter for the second time in team history. The other was in a 160-128 win over the Trail Blazers in 1972. 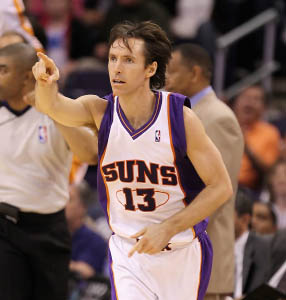 (AP Photo/Ben Margot)
Steve Nash gave out 14 assists for the Suns, who scored an NBA season-high 152 points in a 38-point win against the Wolves. Jason Richardson (27 points), Amare Stoudemire (25) and Louis Amundson (20) powered the Phoenix attack.

MEMPHIS -- At least once a week, somebody will ask me some variation of this question: How does Derrick Rose's game compare to John Wall's?

I decided to ask the Bulls' 21-year-old point guard the same question Tuesday morning about the freshman point guard from the University of Kentucky.

"Wow," Rose said after a pause. "My game to John Wall's ... I really don't know. I haven't watched him really enough to look at his game like that or say anything about his game. All I know is that he is a great player. And they're playing good basketball right now, so I can't say anything about him."

Rose does know that John Calipari, his former coach at Memphis and Wall's current coach at Kentucky, is getting ready for March Madness in his own special way.

9. Coach Of The Year Watch

1. Scott Brooks, Thunder: Oklahoma City extended its win streak to five thanks to a defense that surrenders 96.6 points per game. (Last week: 1)

2. Scott Skiles, Bucks: The Bucks already have won two more games than they did all last season. They have reeled off six straight victories and won 12 of their past 13 games. (Last week: 2)

3. Nate McMillan, Blazers: Maybe it's because Portland plays in the toughest division in basketball, but how come there aren't a lot of people talking about the red-hot Blazers, who have won nine of their past 11? (Last week: 3)

4. Larry Brown, Bobcats: Charlotte has won six in a row, already has established a franchise record for home wins (24) in a season and needs just one more victory to tie the franchise mark (35) for most total wins in a season. Not bad. (Last week: NR)

5. (tie) Lionel Hollins, Grizzlies, and Rick Adelman, Rockets: Neither one of these coaches has a team headed to the playoffs (the eight playoff teams in the West -- Lakers, Nuggets, Jazz, Thunder, Blazers, Suns, Mavs and Spurs -- are set), but both deserve kudos for getting their overachieving teams three games over .500. (Last week: 5 and NR)