1. Despite Loss, Defense The Key For Bucks

LOS ANGELES -- Coming into Wednesday night's game against the Los Angeles Clippers at Staples Center, the Milwaukee Bucks held the mantle as the NBA's hottest team. Unfortunately for the Bucks, their six-game winning streak was snapped by the Clippers, 101-93. It was the first time in seven games that Milwaukee surrendered more than 100 points.

"It was such a departure from the way we've been playing," Bucks coach Scott Skiles said. "We were just very slow defensively."

There were glimpses of the stifling fifth-ranked defense that fueled Milwaukee's recent stint, when they won 12 times in 13 games. In the third quarter, the Bucks held the Clippers to a single bucket during a 6½ minute stretch.

There's a tendency when watching the Bucks to lock your eyes on the theatrics of Brandon Jennings. The charismatic rookie point guard buzzes around the court with an infectious combination of improvisation and purpose. He's been a quick study on the pick-and-roll -- and has a skilled dance partner in center Andrew Bogut.

But if you really want to understand why the Bucks have climbed up the Eastern Conference standings, watch Bogut patrol the paint on the defensive end of the floor. Watch him forcefully push every opposing big man off the block. Watch him bump every wing who tries to clear through the lane to the other side of the floor. Watch him protect the rim, challenge every shot and swat away shots at a rate of 2.51 per game (good for second in the league). Most important, watch him cover for his teammates.

"To use a soccer term, Andrew is a great goaltender," Bucks general manager John Hammond said. "He's also turned into one of the best shot-blockers in the NBA. I think that's really taken his defense to a whole other level."

Bogut recorded another four blocks on Wednesday night. His "goaltending" and shot-blocking are the tent poles of the Bucks' vaunted defense. His back-line presence allows Milwaukee's capable perimeter defenders to be aggressive. The Bucks are the fourth-best defense in the league at forcing turnovers.

"You've got all these gifted guys with the ball and great athleticism," Skiles said. "There are going to be times when you make a great effort defensively and a guy drives by you. But if you have a guy back there who can erase that mistake, it's big."

Bogut credits his defensive game to Skiles' well-defined defensive program that guides all the defensive decisions on the floor.

"Our coverages don't change game in and game out," Bogut said. "I try to focus on getting to my spot early. I pay attention to where the guards are coming from so I can get in position. If I don't block the shot, then I try to take a charge, or at least don't give them an easy bucket."

That defensive system is characterized by a few basic features. The Bucks do a thorough job covering the pick-and-roll with hard shows. Bogut has a license to use his length and footwork to drift back on ball screens to wall off the lane and get in strong position to block -- or change -- a shot.

"The principles are simple," Bogut said. ""Keep pick-and-rolls to the sideline. Try to keep the ball out of the middle. Have five guys rebounding."

Although Bogut is what Bucks veteran swingman Jerry Stackhouse refers to as the team's anchor, the big Aussie isn't a one-man gang.

"We also have two or three guys who can guard on the perimeter," Stackhouse said. "Luc [Richard Mbah a Moute] and Carlos [Delfino] do a good job. And Charlie [Bell] is great."

Defense has always come first for Skiles. His Chicago Bulls teams were consistently among the stingiest in the league -- though you would've been hard-pressed to find any All-NBA defenders on those rosters. In Milwaukee, Skiles has Mbah a Moute, whom Kevin Durant called one of the toughest defenders in the league. The Bucks' defense gives up 4.1 fewer points per 100 possessions when the second-year forward out of UCLA -- who usually draws the toughest defensive assignment -- is on the floor.

Bogut and Mbah a Moute might be the standouts, but the Bucks execute their defensive schemes as a five-man unit, something they've done especially well over the past month. Lesser teams focus almost entirely on the ball in the half court, but the Bucks distinguish themselves by multitasking. They defend weakside actions like pin-downs and off-ball screens as effectively as any team in the league. If there's a cutter, they're on him. They anticipate step-up screens as if they know what's coming. All of this suggests a team that's exceptionally well-prepared to take the floor, even if that precision wasn't entirely evident in Wednesday's loss. For the Bucks, individual responsibility accompanies that readiness.

"Scott holds guys accountable on the defensive end of the floor," Hammond said. "He gives them a lot of freedom on the offensive end, but on the defensive end he has them on a very short string. There is a system, and if you break down within the system, there's a good chance you're coming out of the game."

After the game, Skiles unleashed some of that accountability, calling his team's effort soft. Asked if the Clippers were a proverbial trap game, Skiles rejected the question's premise.

2. Hodges On The Lakers, Triangle And Kobe

LONG BEACH, Calif. -- Lakers shooting coach Craig Hodges is dressed just as he does before any Lakers home game. Black Lakers-logoed shirt covering his slim torso. Black mesh shorts over legs still sculpted enough to carry his 6-foot-2, 180-pound frame up and down the court for a game with ease, even though he turns 50 in June. White NBA-logoed socks on his feet.

Only he's not wearing any sneakers. And he's home. As in home home, at his apartment in Long Beach, getting ready to watch the Lakers' road game against the Sacramento Kings on Tuesday.

Hodges, who played for Lakers special assistant coach Tex Winter in college at Long Beach State and for head coach Phil Jackson when they were first together back in Chicago, is in his fifth season assisting the team, providing the shooting expertise that led to a three-peat of 3-point contest titles for him at NBA All-Star Weekend in the early '90s.

Stephen Jackson scored 18 points in the second half to lead Charlotte to a 100-92 win over the Thunder. The Bobcats, who trailed 51-32 with two minutes remaining in the second quarter, matched their largest-ever come-from-behind victory. It was the third time in franchise history that Charlotte won a game in which it trailed by 19 points. The other wins were on Jan. 16, 2008 (over Orlando) and earlier this year, on Jan. 2 (at Miami). 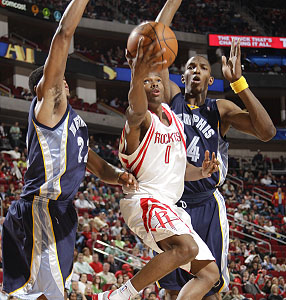 (AP Photo/Ben Margot)
Aaron Brooks set a Rockets' franchise record by going 7-for-7 on 3-pointers en route to scoring 31 points to lift Houston to its fourth straight win -- 107-94 against the Grizzlies.

• Chris Bosh wins it for Raptors!

BOSTON -- The night couldn't have started much worse for Paul Pierce.

The Boston Celtics' captain picked up a foul nine seconds into the game and his second shortly thereafter, putting him on the bench less than two minutes into Wednesday's game at TD Garden against the New York Knicks.

When Pierce checked back into the game early in the second quarter, he missed a technical free throw, committed a turnover on a bad pass, watched former Celtics bench-warmer J.R. Giddens drive on him for a layup, and was whistled for a defensive three-seconds violation.

Few would have blamed Pierce if, for the second straight game, he retreated to the locker room before intermission -- this time for the night. It seemed everything he did kept him from falling into the rhythm coach Doc Rivers has been desperately seeking from him this month.

DALLAS -- Exactly what you thought was going to happen happened on Wednesday night.

"Oh yeah, absolutely," the Bulls' coach said. "It's just a really tough run for us right now with everything we've had to deal with. But, no excuses. Handle it the right way. Try to keep the confidence up. Keep them battling. Hopefully find a way to get some long rebounds and turnovers and make plays down the stretch. Whether it's defensively or offensively."

The bottom line for Del Negro and his team is that they don't have any answers right now. Who can blame them? Without Rose, Deng and Noah they simply aren't good enough to compete right now.