With 14 games left in their season, the New Jersey Nets need three more wins to avoid the dreaded "worst of all time" moniker currently being carried with astonishing pride by the 1972-73 Philadelphia Sixers, who finished that season 9-73. That means all eyes will be on the Nets to see if they will hit 10 wins.

For starters, in order to bypass being forever known as the W.O.A.T., New Jersey is going to have to finally do something they haven't done all season: beat the bad teams. If you look at John Hollinger's latest power rankings, the Nets have played stunningly badly against some of the league's bottom feeders. They are 1-16 against Minnesota, Indiana, Philadelphia, Washington, Detroit, Sacramento and the Los Angeles Clippers. Those brave enough to watch Wednesday's Nets versus Sixers matchup in Philadelphia would have seen a struggling Sixers team, without Thaddeus Young and Marreese Speights, thoroughly outplay the Nets on both ends, leading by as many as 22. So when examining the Nets' remaining schedule, it's very difficult to just circle a game and give them the benefit of the doubt.

Let's start by throwing out what are certain to be losses for the Nets over the next 14 games: vs. San Antonio (March 29), vs. Phoenix (March 31), at Milwaukee (April 7).

The next group includes games in which on paper the Nets have a shot, but will probably end up in the loss column:

March 22 vs. Miami: The Nets have played Miami tough in their past two meetings, losing by a total of four points, but the Heat are fighting for playoff positioning and won't be sleeping on the Nets. Chalk up April 14 at Miami as a loss as well.

April 12 vs. Charlotte: The Nets have already beaten the Bobcats twice this season, so the "law of averages" says no way a team contending to be the W.O.A.T. beats an above-.500 playoff team three times in one season.

Now here are the games to circle:

March 24 vs. Sacramento: The previous time these two played, the Kings won when Devin Harris was just getting back into game shape after missing most of the first month of the season. In terms of offensive and defensive efficiency, the Kings are similar to the Knicks, another team the Nets have beaten twice. Looks like win No. 8 to me.

March 26 vs. Detroit: The Nets haven't won two games in a row all season, so my guess is they continue the trend and stay stuck on No. 8 for another night.

March 27 at Chicago: Once the Nets have beaten a team, they look much more comfortable the second time around. Given that Chicago is in a bit of a free fall right now, it looks as if the Nets will at least tie the 1972-73 Sixers with No. 9.

April 3 vs. New Orleans: The Nets almost shocked the Hornets on the road when they last played in January, and NOLA has been in steady decline recently. But the Nets currently have only one win (and possibly two by this point) against Western Conference teams, and I don't like those odds.

April 4 at Washington: You would think the Nets would find a way to beat Washington at least once this season, but given that they'll be flying out of Jersey to D.C. likely licking their wounds from their loss at NOLA, my gut says the Wizards sweep the season series.

April 9 vs. Chicago: Similar to my theory with the Bobcats, I can't see the Nets sweeping a season series from anyone. I do think they'll split one of their two remaining games with Chicago, but with win No. 10 staring them straight in the face, I expect a choke job in Jersey.

April 10 at Indiana: Another bad team that happens to give the Nets matchup problems, particularly Roy Hibbert who's physical enough to take Brook Lopez out of the game. It doesn't help that Lopez, who's played every game this season, is fading down the stretch and is averaging season lows of points (16) and field goal percentage (42 percent) in March.

So by my math, that leaves the Nets stuck at nine wins at season's end, which means they won't own the W.O.A.T. honors outright, but will share them. And while the numbers-crunchers may give the Nets better odds of avoiding infamy than I do, keep in mind that the Nets have put together a season that has defied rational thought from the get-go. No one had them pegged as being this bad before the season started, but a team that has continually found new ways to lose can't be expected to finally get things right with only 14 games left.

2. Are The Nuggets Mentally Tough?

The biggest knock against the Denver Nuggets is their mental toughness. It seems an easy case to make with the memory of two failed inbound plays costing them wins in the conference finals, their poor performance against the bottom-dwellers of the NBA and the fact that they have lost 10 games in which they held a double-digit lead, including each of their last four losses.

There is a flip side to that argument. Their record against the top teams may provide a frustrating counterpoint to their struggles against the bottom dwellers, but it does show they can focus and beat any team, anytime, anywhere. They have posted a 7-1 record over their previous eight games even though they have been without at least two of their top eight players during that stretch. You can argue that five of those seven wins came against sub-.500 teams, but those are the very games they have been criticized for losing.

The real test of their mental resolve is the fact that their head coach is fighting cancer. They come to work every day and see the struggle on his face and in his movements. George Karl has missed five of their previous six games and will miss more. Instead of allowing themselves to be distracted by his plight, they have chosen to draw strength from his resolve.

There was a time when Kobe could not win without Shaq, Kevin Garnett was not good enough to win a title and Doc Rivers was not a championship coach. Even the great Michael Jordan could not get past the Detroit Pistons because the Bulls were too soft.

The point is, teams or players wear a label until they prove they are something different. Go ahead and label the Nuggets as mentally soft; just don't be surprised if that sign has to be removed over the next two months.

Denver beat New Orleans 93-80 on Thursday night, scoring 62 points in the first half but only 31 in the second half. It was the first time in the Nuggets' 34 seasons in the NBA that they won a game in which they scored at least twice as many points in the first half as the second half. The only other such win in the NBA this season was Oklahoma City's 102-89 victory in its season opener (Oct. 28 vs. Sacramento: 68 first-half points, 34 second-half points). 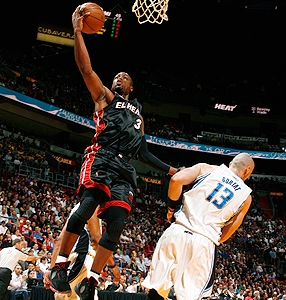 (Issac Baldizon/Getty Images)
Dwyane Wade did it all, shaking loose for 36 points, grabbing 10 rebounds and handing out seven assists, but the Heat struggled in overtime of their 108-102 loss to the Magic. Orlando has won 10 of its past 11 games.

Countless NCAA tournament brackets were torn to shreds Thursday when No. 3 Georgetown lost to No. 14 Ohio, No. 4 Vanderbilt was toppled by No. 13 Murray State and No. 6 Marquette fell to No. 11 Washington. While those three defeats may have drastically reduced a lot of fans' chances of winning their office pool, maybe they can take a little solace in knowing that Cleveland's LeBron James made those same incorrect selections.

LeBron does deserve some props. He correctly picked No. 11 Old Dominion's victory over No. 6 Notre Dame.

To check out all of LeBron's picks, click here

9. Are The Heat More Than Wade?

These are facts that may be surprising to both long-term followers of the Heat and their most casual fans; the past two seasons have been all Wade all the time. Rightfully so. He's one of the league's truly elite players, and despite the perceived rift between Kobe, LeBron and the rest of the superstar pantheon, Wade is within a stone's throw of the pinnacle of today's game.

The more substantial gap exists between Wade and everyone else in a Heat uniform. It's a matter of sheer magnitude: Wade is All-World, the rest of the roster merely All-Miami proper. Even more substantial is the very difference that separates would-be stars from the best in the game: consistency. Wade's supporting cast is actually chock-full of useful role players, but their strength in individual skills is more than countered by a complete lack of dependability.

Carlos Arroyo's 11 points and five assists were much needed in Miami's overtime loss to Orlando, but he failed to top five points on four occasions so far this month. Dorell Wright looked to be finding a small slice of redemption for his long-unfulfilled potential, but wore out his welcome with poor shot selection. Michael Beasley looks well worth the second overall pick in the 2008 draft at times, but the game slips through his fingers at others. The closest thing Miami has to a stable second option is Jermaine O'Neal, who, despite his solid play this season, manages to go from a 6-foot-11 presence to completely invisible in a matter of seconds.

In so many ways, Thursday night's game was a microcosm of the Heat on the whole: O'Neal's five blocks were balanced by his lack of effort on the boards and his questionable shot selection. Beasley's brightest moments -- a made bucket in the final minute of regulation and a pair of free throws off a drawn foul late in overtime -- were overshadowed by his four turnovers. Every conceivable positive from the Heat rotation was offset with a negative, culminating in a loss for Miami and another headache for the franchise player.

So the Heat do employ players that aren't named Dwyane Wade. The trouble is, there's no way of knowing who, on a game-by-game basis, will actually show up.

To read more from Mahoney, check out Hardwood Paroxysm and The Two Man Game