CLEVELAND -- It started out as the celebration of a young phenom, with David Stern handing LeBron James the Maurice Podoloff Trophy and thousands of adoring fans raising "MVP X2" placards.

But after all the hoopla and fanfare, it quickly became a reminder that old champions don't die easily, that contrary to popular belief, the glory days may not be over for Boston's group of proud and feisty veterans.

Oh, and they have a young phenom, too.

Don't count Kevin Garnett, Ray Allen and Paul Pierce out just yet. They've got warriors' hearts, and just as importantly, Rajon Rondo, a slick point guard who's at his best when the stakes are sky-high. Though some, including me, penned their epitaph in March, the Celtics appear more poised to seize the moment than do the ballyhooed Cleveland Cavaliers, whom the Celtics demolished 104-86 Monday night to even the series at 1-1 and steal away the home-court advantage.

Whether or not the widespread talk of their demise has added to the boulder on their shoulders, there's no question that the playoff Celtics are very different than the regular-season Celtics. Either bored or coasting, they played middling .500 basketball over the final four months of the season. But now they're on another plane, crushing Miami in five games and outplaying Cleveland for the better part of the first two contests.

Pride had the Celtics -- one of the league's worst rebounding teams during the regular season -- hogging the boards Monday, outrebounding the Cavs by 11.

Pride had Garnett, who has become known as a jump-shooter the past few years, banging bodies with Antawn Jamison and J.J. Hickson on the block. Aggressive as an MMA fighter, he's taken an uncharacteristic yet welcome 41 shots over the two games, producing 18 points and 10 rebounds in each.

Pride had Allen shooting like he was a 20-something playing in Seattle. Shooting nearly 50 percent (24-for-50) from 3-point range in the postseason, he hurt Cleveland badly Monday, nailing three triples in scoring a team-high 22 points, including 10 in the decisive third quarter, when Boston outscored the Cavs 31-12 to turn it into a rout.

Pride even had the beleaguered Rasheed Wallace -- who, quite frankly, had been playing like a stiff -- posting up and hitting 3s in scoring 17 points and turning all those who have rued the day he joined Green Nation back into fans.

But pride didn't perform solo. Rondo, who has conducted a clinic in point guard play at Cleveland's expense, fed the vets on most of their buckets.

Living in the lane and pushing the tempo at every opportunity, he's drawing multiple defenders and then finding his teammates for wide-open looks on the perimeter. Rondo matched his career high -- as well as tying Bob Cousy's Celtics playoff high -- with 19 assists. Unbelievably, he had 12 by halftime. Just as unbelievably, he had two more assists than Cleveland's entire team.

"It's to the point where he's controlling the game from start to finish," Jamison said of Rondo. "We can't let it be so easy."

The Cavs were as lethargic as the Celtics were prideful. With his team being much too gracious hosts for Mike Brown's taste, the typically jovial "golly-gee-wiz" Cleveland coach entered his postgame news conference with steam firing out of his ears. It's perhaps the most heated he's ever been after a game.

After watching his supposedly hungry club treat Game 2 of the Eastern Conference semifinals like Game 2 of the preseason, Brown was hot, even throwing out a rare curse word to describe the Cavs' play.

"Tonight was real simple," Brown began. "For 48 minutes, we did not play with a sense of urgency. We tried the last few minutes of the game. They kicked our behind from the beginning.

"We have to decide if we are going to take the fight to them and take these games. Ain't a goddamn thing going to be given to us at all in this series. The series is 1-1. We are going to see what we are made of come Game 3."

The Cavs were made of Cottonelle on Monday, allowing the Celtics to hit 51 percent of their shots and committing just 16 fouls (15 fewer than Boston).

Mo Williams, the Game 1 hero, went back to being Rondo's punching bag, missing eight of his nine shots in scoring just four points.

"He's got to step it up," Brown said. "It's as simple as that. It's going to be tough for us to win a series if Mo plays like he did tonight."

James said he's not surprised at all by the about-face the suddenly clicking Celtics have done in the postseason.

"A lot of people wrote them off," James said. "But I felt like they were just waiting for another challenge."

The question is, what are the Cavs waiting for?

Chris Broussard is a senior writer at ESPN The Magazine.

PHOENIX -- No messy nosebleeds. No crushing long-range surprises from Tim Duncan. No Game 1 fold for the Phoenix Suns.

This time? They merely flirted with the collapse.

The Suns have finally managed to start a series with San Antonio by dodging the usual calamitous ending, holding on for a thrilling 111-102 triumph Monday night that had coach Alvin Gentry unable to hide his relief as he departed the interview room.

"It's going to be a long series," Gentry said.

Yet you would also have to say, on this evidence, that it's going to be a vintage Suns-Spurs series on the drama scale, despite the repeated pleas by Gentry and other Phoenix types that the Suns' painful playoff history with these guys should be ignored, since so many Suns are new to the tension these teams generate.

Try telling that to the desert dwellers who nervously filed out of US Airways Center. A familiar feeling of dread, bordering on inevitability, spread through the building when the Spurs quickly erased double-digit deficits to start the third quarter and the fourth, with the latter run causing particular consternation because Steve Nash and Jason Richardson had been parked on the bench for too long, sitting for nearly six minutes to start the final quarter.

Rondo scored 13 points and matched a career and playoff high with 19 assists to pace the Celtics past the Cavaliers and even the best-of-seven matchup as it shifts to Boston.

According to the wizards at ESPN Stats & Information, Rondo single-handedly accounted for 59 of Boston's 104 points, his 19 assists leading to 46 points. LeBron James, who accepted his second consecutive MVP award Tuesday night, and Mo Williams, who took over Game 1 with a furious third-quarter outburst, combined to account for 53 points for the Cavaliers.

To read the rest of Forsberg's blog, click here

Rajon Rondo, Celtics
When thinking about the Celtics, the first thing to come to mind is usually the Big Three. With the way Rondo has been playing, it should be the Big Three plus one. The point guard tied a team playoff record with 19 assists as Boston upset Cleveland. 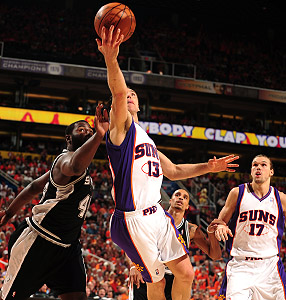 (Barry Gossage/NBAE/Getty Images)
Steve Nash might be the league assists leader, but it was his scoring that gave the Spurs fits in Game 1. The point guard scored a game-high 33 points as the Suns rolled to the home victory.

PHOENIX -- The second round of the playoffs is not the optimal time to work out a team's rotation. Yet there were the Spurs, scrambling to get back into Game 1 against Phoenix by starting Tony Parker in the second half and pulling Keith Bogans out of cold storage for an extended fourth-quarter burn.

Both moves worked out profitably, as San Antonio scored 20 points on nine trips to briefly regain the lead early in the fourth quarter, while Bogans' stint included a 13-0 run in the fourth that again put the Suns' advantage in danger.

The problem for San Antonio wasn't that; it was the rest of the game. Take away those two flurries and the Suns outscored the Spurs 104-69.

And that's why the Spurs scrambled so much with their rotation and ended up with their new sixth man, Parker, going back to his old role at starting point guard in the second half, while their two new acquisitions, Richard Jefferson and Antonio McDyess, spent most of crunch time on the bench.

"George [Hill] had three fouls; we just didn't want him to start out and get a fourth one quickly," said Spurs coach Gregg Popovich. Hill did play 33 minutes, including most of the fourth quarter, when the Spurs went small.

However, Parker scored 26 points while Hill had only nine on 2-of-9 shooting, leading to speculation that Parker might be the starter at point guard in Game 2. Popovich's answers didn't exactly tamp down such talk.

I beg to differ. Parker is the one Spurs player who can attack Steve Nash off the dribble and force him to expend some energy on defense -- which could, Spurs fans hope, distract him from ripping San Antonio apart on offense (33 points, 10 assists).

So look for that adjustment from the Spurs in Game 2, and look for Jefferson's minutes to get squeezed by heavier use of Hill-Parker backcourts that move Manu Ginobili -- or, um, Bogans -- to small forward.

The Spurs might have additional surprises in store. As well as they played over the final month of the regular season, and in beating Dallas in the first round, the team remains a work in progress. How close they get to a rotation solution will go a long way toward determining whether they can once again knock off the Suns.

9. Do The Hawks Have A Chance?

Jeff (Pasco, WA): What do the Hawks need to do to stay competitive with the Magic?

Chris Sheridan: The key thing, in my opinion, is to frustrate Dwight Howard any way they can. They need to foul him, flop against him, put him in foul trouble again. And perhaps most importantly, they need Al Horford to pull him away from the basket by knocking down his first couple of 15- to 18-foot jump shots.

Chris (San Antonio TX): Chris, must the Spurs get a Split in order to beat the Suns or do you think they can go on a run later and still win the series?

Chris Sheridan: Aside from the Cavs, I feel they are the team most capable of winning on someone else's court at any particular time, which is why I picked them in 7 against Phoenix, meaning they'd have to win that last game on the road.