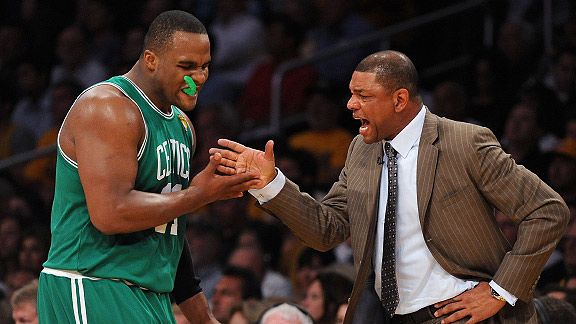 Lisa Blumenfeld/Getty Images Will the Baby/Doc celebration in Game 2 carry on during the next three Finals games in Boston?

•  On the defensive end, Boston's magic number to win is 95. The Celtics are 12-0 when allowing 95 or fewer points this postseason. Boston is 1-6 when allowing 96 points or more.

•  Remember that the Celtics were 3-0 at home against the Lakers in the 2008 NBA Finals, including the 39-point clincher in Game 6. Boston's averaging margin of victory in those three games was 18.3 points. Games 3, 4 and 5 will be played in Boston.

•  In Game 2, the Lakers had 14 blocked shots, setting a NBA Finals record. Andrew Bynum had seven blocks and Pau Gasol had six as they became the first teammates in Finals history to each have five or more blocks in a game.

• Ray Allen made an NBA Finals-record eight three-pointers in Game 2. Seven of those were of the catch-and-shoot variety, meaning no dribbles once he caught the ball.

Peter Newmann is a regular contributor to the Daily Dime.

2. For Some, No Love Lost For Lakers

Before ESPN's Doris Burke had even finished interviewing Rajon Rondo after yet another virtuoso performance, I received a text message from a Philly friend who was gloating about the Celtics' win. I hit him back: "You're from Philly, man. How can you possibly pull for Boston?" His response: "Man, them days are gone. And I just really loathe the Lakers to unhealthy levels."

He's not alone. And this, my people, represents a significant shift in NBA fandom and, uh, hatedom.

The Celtics were the most hated NBA team of my youth, by far. Didn't matter if you lived in New York, Chicago, Philly, D.C., Detroit, Milwaukee, Atlanta or wherever. If you lived east of the Mississippi River, you loathed the Boston Celtics. And chances are you probably dug the Showtime Lakers, because they weren't beating your squad three or four times every season or ending its season for good in the playoffs, unlike the Celtics. Hate for the Celtics was about jealousy and the fatigue of losing.

But you know what? The reps of both the Celtics and Lakers seem to have changed for folks in my generation -- even us east of the Mississippi. The Lakers have become the most hated team in basketball, especially for real hoops fans. The Lakers remain the overwhelming favorite for casual fans, because they're a glamorous team in a glamorous city led by a glamorous star. On the other hand, no current team is the object of as much bile and venom -- again, especially from real fans who actually care about the NBA -- as L.A. How did we get here?

In the league? No. The honor of best big man still belongs to Dwight Howard. However, the Celtics are having a lot more trouble controlling Andrew Bynum than they did stymieing Superman. Much of the adversity the Celtics have stared down when it comes to guarding this mammoth seven-footer with unquestionable touch from within five feet, comes from the other Lakers players of which the Celtics must be mindful.

In Game 1, the Celtics tried to play everyone straight up and got the worst of both worlds. Kobe Bryant had a field day, consistently getting to the rim. Bryant mesmerized the Celtics' help defense and didn't even have to utilize a Rondo behind-the-back fake pass to do it. By playing straight up, man-to-man, the Celtics' big men also felt they could not completely leave their men to cut off penetration. The result? Kobe Bryant scored 30 points, Pau Gasol chipped in 23, and Andrew Bynum and his length were the beneficiaries of 10 points on 4-of-6 shooting.

Without Bynum clogging up the paint, using his length to overpower Kendrick Perkins, and not allowing the Celtics to feel comfortable enough to play the necessary help-defense, the Lakers had a field day.

Something had to give in Game 2. Either the Celtics pack in the paint and bang bodies or they cut down penetration, take charges and play tough, physical wing defense. They opted for the latter and Kobe Bryant finished the game with 21 points, and Andrew Bynum went off, matching his counterpart with an even 21 as well. The result? A nine-point Celtics win.

To read the entire column from CelticsHub, click here 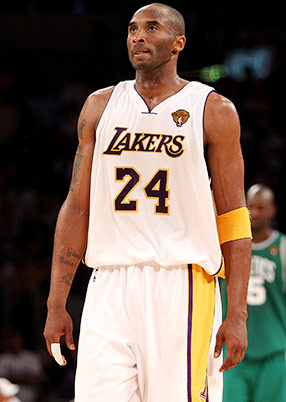 LOS ANGELES -- "3 Mo." After Game 1 of the NBA Finals, the phrase written on the dry erase board in the Los Angeles Lakers' locker room served as a source of motivation. After Game 2, it remained on the board, unchanged, serving as a reminder that the Lakers remain three wins away from winning the NBA championship, and a reminder that they must now travel to Boston for the next three games.

If the Lakers are to win "3 Mo," they must win at least one game in Boston, something they were unable to do two years ago, when the Celtics not only won all their Finals home games but also came back from a 24-point deficit in the third quarter to steal one in Los Angeles. This wasn't part of the redemption plan the Lakers had in mind.

As they quietly walked out of the locker room Sunday night following the Celtics' 103-94 win in Game 2, which tied the series at one game apiece, the Lakers no doubt remembered the helpless feeling of falling into a 2-0 hole leaving Boston two years ago. They had wanted to put the Celtics in the same position in this series. More than that, they had wanted to keep home-court advantage, something they had worked all season to earn. But it took them only five minutes to lose it, as they hit just one of nine shots and committed three crucial turnovers down the stretch.

To read the entire column from Markazi, click here

FWIW: I still don't see LBJ leaving Cle. But as I'm often reminded, I believed - on much greater authority - that Kobe would force a trade.less than a minute ago via web