It's getting to the point that even Phil Jackson doesn't have an answer for the Lakers. A four-game winning streak punctuated by a 28-point victory over the Warriors Sunday night led to a 10-word opening statement at the coach's news conference afterward.

"I don't know what to say," he concluded. "You can ask questions."

In running their record to 12-2 the Lakers have already told us plenty about their approach to the season. They will do everything to win all their games, which seems like a basic assumption unless you've spent enough time watching the NBA. Taking nights off is an affliction that can strike both the good teams and the ones just playing out the string, an inevitable by-product of an 82-game season.

Except it hasn't struck the Lakers. Three-quarters of their victories have been by double-digit margins, a sign that the starters came out with the intention of putting teams away. And three quarters' worth of work is all Bryant had to put in Sunday, as in three other games this season, and a sign the bench players took care of business enough to keep the starters on the bench in the fourth.

Reserve forward Matt Barnes was serious enough to get called for a flagrant 1 foul in the fourth quarter, when he knocked Vladimir Radmanovic to the ground on a layup attempt when the Lakers were ahead by 35 points. "I went for the ball," Barnes said. "I wasn't looking at the score, I'm looking at the wide-open layup."

Shannon Brown continues to provide instant offense from the second unit; Sunday it was 17 points in 19½ minutes.

Sometimes veteran teams with championship experience will abandon the chase for the league's best record and home-court advantage throughout the postseason, confident in their ability to win playoff games on the road. That hasn't been the case with the Lakers.

"It's just about winning every night," Bryant said. "You're here, you show up, your job is to play and your job is to win. I don't think anybody really frets about home-court advantage."

When the game began to slip away from the Lakers in their first loss in Denver on Nov. 11, Jackson was quick to send Bryant back on the court, a sign he wasn't content to have the game serve as a teachable moment.

Their only other loss came by five points on a night the Phoenix Suns made a franchise-record 22 3-point shots, one shy of the NBA record. And even in that game the Lakers scored 116 of their own. The Lakers are going for it, each and every night.

"We've had some lapses," Jackson said, "But I've never complained about their hustle."

And if you can't knock the hustle, what is there to complain about? "I always have complaints," Jackson said. "There's not a perfect game."

Try telling that to Pau Gasol, who made all 10 of his field goals and all eight of his free throws for 28 points. Gasol also had 9 rebounds, 5 assists and 4 blocked shots. Well, he did have one turnover. Make him run extra after the next practice.

Meanwhile, Bryant is putting in less work. Bryant is producing only 23 percent of the Lakers' points, his lowest percentage since 1999-2000, when Phil Jackson was in his first season as Lakers coach and Shaquille O'Neal was the league's most valuable player.

There is less asked of Bryant on defense as well. Ron Artest can defend the likes of Brandon Roy and Monta Ellis (whom he helped hold to 2-for-10 shooting before Ellis left with a leg injury in the third quarter). And when Artest checks out Barnes can take over.

It should all leave Bryant fresher for the start of the playoffs, as opposed to the worn-down player the Lakers had at the end of the regular season last season. The rest of the Western Conference hasn't ceded anything to the Lakers. The Hornets and Spurs, with one loss each, have higher spots in the conference standings. The Lakers have played eight of their first 14 games at home, and only three of their games have come against teams that currently have winning records. So there's no reason to be overly impressed by the 12-2 record, simply an occasion to acknowledge the slack-free manner in which the Lakers have achieved it.

2. Celtics Stumble In Loss To Raptors

By Peter May
ESPN Boston

We saw a lot of this last season, with the Celtics losing to teams they should have beaten. It came back to bite them when they had to play Games 6 and 7 on the road in the NBA Finals. It's something Doc Rivers said would be a top priority this season -- not taking the Torontos of the world for granted. Guess what? The Celtics lost to an undermanned Raptors team less than 48 hours after they lost at home to an Oklahoma City team without Kevin Durant and Jeff Green.

Championship-driven teams (to borrow a phrase from the ML Carr era) don't do this. Veteran teams, however, do have a tendency to do this. And the Celtics, unmistakably, are a veteran team. Two of the Celtics' four defeats have come to sub-.500 teams and a third was to a team that would be sub-.500 if it had to play a whole season without Durant and Green. The Celtics had beaten Toronto 11 of the past 12 games and had won their past six in the Air Canada Centre. The Celtics also pride themselves on being a good road team. They are now 4-3 on the road with a tough game in Atlanta Monday night.

3. Haslem Out With Torn Ligament

MIAMI -- An MRI exam Sunday confirmed that Udonis Haslem indeed has a torn ligament in his left foot, which will rob the Miami Heat of their ever-reliable power forward for at least six weeks and likely much longer.

One source close to the situation told ESPN.com on Sunday night that there are fears Haslem will be sidelined until at least the All-Star break depending on whether he needs surgery.

One source close to the situation told ESPN.com on Sunday night that there are fears Haslem will be sidelined much longer -- potentially until the All-Star break -- depending on whether he needs surgery.

Haslem suffered the injury Saturday in the third quarter of Miami's loss at Memphis after he collapsed while defending the Grizzlies' Zach Randolph in the post. Teammates were told Haslem had a dislocated toe in addition to the torn ligament.

The Heat announced that Haslem will see a specialist Monday before a treatment plan is finalized, but the recovery schedule is certain to drag well into 2011 if surgery is required.

Heat president Pat Riley told local reporters at a charity event Sunday night: "We don't know [the severity] right now. With him, I doubt if he'll miss the year, but let's wait until [Monday] to get the final determination of what it is.''

Riley said it's "unclear as of today'' if Haslem needs surgery. But Riley, referring to Haslem's toughness, added: "We're dealing with Superman here.''

The last starting center on any NBA team to score at least 85 points over three consecutive games, all of which were victories, was Pau Gasol with the Lakers in February 2009.

"I still enjoy playing this game, and I'm always going to work hard out there. When they need me, like they did tonight, I'm going to be ready." 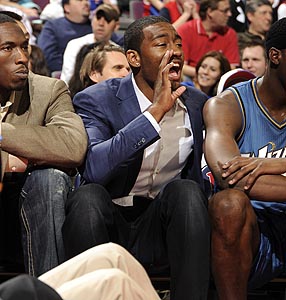 (NBAE/Getty)
With John Wall in street clothes, Gilbert Arenas stepped up, tallying 19 points, 4 rebounds and 16 assists, but it wasn't enough to prevent the Wizards from losing to the Pistons in overtime.

LOS ANGELES -- The Los Angeles Lakers' laugher of a win Sunday would have been even more lopsided if not for Andris Biedrins offering some semblance of resistance against L.A.'s twin towers, Pau Gasol and Lamar Odom, down low.

But even if the seven-year center out of Latvia had a career night, it wouldn't have mattered with the Lakers shooting 55.7 percent as a team and racking up assists on 32 of 44 baskets.

There was one assist by the Lakers that went unaccounted for, however. It was the one served up by Lakers athletic performance coordinator Alex McKechnie to Biedrins this past summer.

Biedrins was operated on for a sports-related hernia last March. When it came to rehabbing the injury during the offseason, he consulted with the Warriors' training staff and his agent, Bill Duffy, and both parties recommended the same person: McKechnie and his training center in Vancouver, British Columbia.

"They told me he was the best," Biedrins said.

Biedrins started using McKechnie's patented Core X regiment on his own before heading up to Canada for several weeks for some direct instruction from McKechnie. McKechnie's facilities are open to any athlete during the NBA offseason. According to McKechnie's website, 24 out of the 30 NBA teams use Core X. The Lakers encourage McKechnie's collaboration, feeling that his services enhance the league. The open policy has already paid off. McKechnie worked with Theo Ratliff in the summer of 2002 when he was with the Atlanta Hawks and the Lakers ended up signing Ratliff as a free agent this past summer.

"It works," Biedrins said of the training method. "Now I feel really strong and healthy just to make sure the injury won't come back."

Biedrins has started all 13 of Golden State's games this season after injuries caused him to miss 69 games over the past two seasons.

"Basically I just re-educate them and redevelop strength and conditioning, but through a series of exercises that's specifically designed to create core stabilization," McKechnie said. "I take pride in the fact that I can help players continue their career. In some cases a condition like [I treat] is actually somewhat debilitating and it's very debilitating in the sense that some people don't even think they can recover from it … But [the system helps] along with time, and effort and discipline."

Asked if the Lakers-Warriors rivalry in the Pacific Division was brought up during his visit, Biedrins laughed.

"No," he said with the smile of a healthy man on his face. "There was no business. Everything was more pleasure."

Dave McMenamin is a regular contributor to the Daily Dime.

Chris Paul gets to play with his one of his best buddies, but the New Orleans Hornets would have made a great trade today even if he and Jarrett Jack were sworn enemies. Today's deal, which sends Jack, big man David Andersen and guard Marcus Banks to the Hornets while forward Peja Stojakovic and guard Jerryd Bayless head to Toronto positions New Orleans as a strong contender in the West and cleans up its balance sheet.