1. Where Have All The Good Times Gone?

MIAMI -- LeBron James finally said what his body language and demeanor change from years past have been screaming off and on for weeks.

He's not having any fun.

The Miami Heat were staggered by their 93-77 loss to the Indiana Pacers on Monday night. There are injuries and it is only November and a bunch of other qualifications apply, but the Heat didn't see this coming. Neither the Pacers nor their 8-6 start with games against the Magic and Mavericks coming this week.

The defeat must have acted as a sobering agent for James, who was frank about his emotions in the wake of a miserable loss.

"There is a point where you have to be serious and you need to be serious," James said. "Just because you're having fun on the court and having fun in practice doesn't mean you're not serious. I'm always serious about the game. But you've got to have fun while you're doing it. We're not doing that right now, we're not having fun at all."

At all. James emphasized it.

Two days prior, in Memphis, the Heat came back to the locker room after absorbing a buzzer-beating loss and learned the initial prognosis was that Udonis Haslem had a torn ligament in his foot and was facing a months-long recovery. It was then James said he knew this season wasn't going to be easy.

What he didn't say was when he realized it wasn't going to be easy. There's a fair chance a big part of that reality hit him that night after seeing Haslem carried off and the Grizzlies batter what was left of the Miami interior defense.

Tuesday, Haslem will have surgery and likely be out until March. Monday, the Heat responded to getting that news by being completely out-executed, hustled and defended by the 6-6 Pacers. Danny Granger shot 6-of-21 and Roy Hibbert was limited to 21 minutes because of foul trouble and the Pacers still skated to victory.

It was because Brandon Rush had what coach Jim O'Brien called "the best game Brandon has had as a Pacer," with 20 points and seven rebounds. And because T.J. Ford had 13 points to lead a bench effort that outscored the depleted Heat's 40-4.

As an eight-year veteran, James knows about long hauls and keeping cool at times like these. Things are never as bad as they seem or good as they seem and all those other well-worn clichés. He was on a team that once started 9-13 and ended up in the NBA Finals.

But it is fair to say that James' start with the Heat is not at all what he was planning, either with his game or his enjoyment level.

"That is how I played the game of basketball, I have fun with it," James said. "It has helped me get to the point where I am today as a professional athlete. I don't think I've brought that to this team thus far."

Against the Pacers, James brought 25 points on 6-of-14 shooting, five rebounds, six assists and six turnovers. It was an unbalanced performance in what has been an unbalanced start with the Heat for him.

Indeed, James' scoring is down but that isn't surprising. He's getting significantly fewer shots.

His turnovers are the highest of his career (four per game), although in part that's because he's playing point guard. James is turning the ball over even more than when he played point guard as a fresh-faced neophyte for most of his first three months as a rookie.

And yet you could successfully argue that he's been the Heat's best player so far.

"Fun can be taken out of character at times," James said. "You can say a team is having too much fun -- when you're winning, you're having too much and guys are serious about the game. I really don't believe in that, personally."

That's what was said about him in Cleveland often, that James had too much fun for his own good. The Cavaliers never won a title with James and perhaps all that fun contributed to those shortcomings.

For a stretch during the malaise-filled Heat loss when they were completely out-executed by the Pacers, James shared the court with this lineup: Eddie House, James Jones, Jamaal Magloire and Juwan Howard.

There will be some nights when each of those role players is great as House and Jones have been at times. It isn't fair to judge what they did against the Pacers, which was make one basket between them. But it is also fair to say that wasn't what James thought he was signing up for either. Which is why there's also been no dancing this season, no dancing at all.

"I've been the in the spotlight for a long time and I've continued to have fun," James said. "I've gotten away from it but I need to get it back."

It is said in basketball that good chemistry is a three-game win streak. The same thing could be said about the fun James seems to be lacking and looking for. Miami's had a couple of those already and will probably have more.

But there's a sense that the "getting back" that James is talking about will need to come from more than beating the Torontos, Charlottes and New Jerseys of the NBA.

"There is only so much anger that can take care of a ball game," James said. "You still have to go out and play. We need to play with the confidence we had earlier in the season. We need to have more fun."

LOS ANGELES -- It was about 16 years ago in Saint Joseph's gym in Philadelphia, where a talented high school player first met an assistant coach for the Philadelphia 76ers.

On Tuesday, for the first time since that meeting, the two meet while at the top of their professions as Kobe Bryant and the Los Angeles Lakers host first-year head coach Tom Thibodeau and the Chicago Bulls.

"He was crucial. He was with me when I was 16 or 17 years old," Bryant said Sunday night at Staples Center, after leading the Lakers to a 117-89 win over the Golden State Warriors. "Just doing drills and just working on ballhandling and just teaching me the game. He was there from Day 1."

Bryant generated a national buzz while at Lower Merion High School in a Philadelphia suburb. He scrimmaged against NBA players at the invitation of former 76ers coach John Lucas, who was friends with Kobe's father Joe "Jellybean" Bryant, a former player and coach. The Charlotte Hornets drafted Kobe Bryant out of high school in 1996 and traded him to the Lakers for Vlade Divac.

-- Atlanta Hawks first-year coach Larry Drew, who it might be said was embarrassed by a 99-76 loss to the Boston Celtics 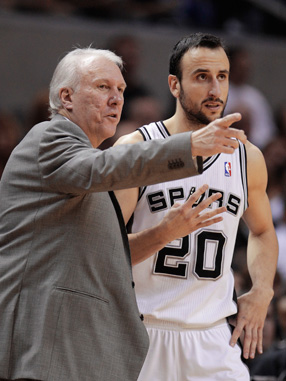 (AP Photo/Eric Gay)
Spurs coach Gregg Popovich can point to an NBA-best 12-1 mark thanks in large part to 25 points, nine assists and six rebounds Manu Ginobili had in a 106-97 home win over Orlando.

7. Every Clipper Has His Day

By Peter May
ESPN Boston

A rout allows coaches to empty the bench and both Boston's Doc Rivers and Atlanta's Larry Drew took advantage Monday night. In Rivers' case, it meant giving No. 1 pick Avery Bradley a chance to make his professional debut. Bradley had missed the first 13 games of the season while recovering from a foot injury and, in the case of Sunday's contest, not getting in because the game was too close.

But this one was over early and Bradley played the final 6:11. He showed his defensive prowess, coming up with a steal and forcing two drives to go awry. At the other end, he was predictably rusty, missing both his field-goal attempts -- badly. "Keep your head up,'' Rivers told Bradley after a botched play. Rivers thinks Bradley has a chance to be an elite defender in the league -- and that's saying something from a coach who cherishes defense over anything short of per diem.

The Heat are a mess!less than a minute ago via Echofon