1. Jefferson's Not Enough To Revive Jazz

SALT LAKE CITY -- Is it time to mention words like "buyer's remorse" yet?

The Utah Jazz were pretty happy when they were able to land Al Jefferson from Minnesota in the offseason, filling the void created by the free-agent departure of All-Star Carlos Boozer. But Utah's current malaise, which stretched to six games after Wednesday's 112-105 loss to San Antonio, has to be giving the Jazz second thoughts.

Let's cut right to the chase: Jefferson doesn't fit. Not with this motion offense, not with equally limited defensive big men like Paul Millsap and Mehmet Okur surrounding him, and not with a roster that is otherwise much more effective in transition.

Jefferson is a fine player, in a vacuum, and he's been decent enough in Utah -- on Wednesday, for instance, he scored 22 points and added nine rebounds. But the Jazz didn't agree to pay him $13 million and surrender multiple first-round picks to Minnesota so they could be "decent." They needed Jefferson to be a star, and in this program he's not.

Wednesday's contest was one of his better games. Yet the Jazz were outscored by nine when he was on the court, in a game they ended up losing by seven, and that's part of a larger pattern.

Utah has been outscored by more than ten points per 100 possessions with Jefferson on the court, a whopping figure that defies explanation when looking at his stats … until one flips on the TV and notes all the easy finishes at the basket every opponent gets against the Jazz. Despite adding several defensive-minded role players in the offseason, the Jazz were 20th in Defensive Efficiency entering this game and 27th in Defensive Rebound Rate.

"We did a poor job trying to help each other," said Utah coach Jerry Sloan, and the result was a layup drill by San Antonio guards Tony Parker and Manu Ginobili (49 points combined).

"We showed too long or too flat, [and] they got way too many easy baskets coming down the lane."

In other words, the big men couldn't stop anybody. With undersized Millsap playing next to the slow-moving Jefferson, the Jazz offer little resistance against opposing pick-and-rolls; this is particularly true early in games, when Sloan thinks his frontcourt tries too hard to avoid foul trouble.

"You really hamper your team [playing not to foul]," Sloan said. "It's hard to score, you try to play catch-up, and we don't get the kind of activity defensively you'd like to have."

Jefferson has the worst first-quarter plus-minus of any player in basketball, something that won't surprise Jazz fans who customarily see the team trail by double figures before trying to rally at the end. While the Jazz pulled off several shocking comebacks at the start of the season, the law of averages has caught up in a big way of late. At 27-19, Utah now stands seventh in the West and faces a near-certain first-round evisceration at the hands of the Lakers if it doesn't move up.

The misfit frontcourt could have larger implications, too, both in the short term and the long term. In the immediate future, one has to wonder if the Jazz will be willing to pay $15 million in luxury tax for a team that looks to be first-round cannon fodder in the Western Conference playoffs. Even Utah's current record greatly overstates its case -- the Jazz have outscored their opposition by a grand total of 16 points on the season, which normally would leave a team at or near .500.

As a result, one has to think the Jazz will be tempted to offload Andrei Kirilenko's expiring $17 million deal and take back a less onerous deal. The Jazz are more than capable of losing in the first round of the playoffs without his help, and whatever salary they can cut would be doubled. For one oft-mentioned example, sending Kirilenko to the Nyets for Troy Murphy's expiring deal, and including a couple of filler contracts on each side to make it kosher, could save the Jazz more than $6 million in salary and luxury tax.

In the longer term, of course, there's a much larger question looming over the franchise, which is Deron Williams' potential free agency in 2012. Williams was spectacular again Wednesday, scoring 39 points despite hyperextending his right wrist late in the first quarter in a scramble with San Antonio's George Hill, but the fact that the Jazz still lost has to make it all the more frustrating. (Williams also has an MRI on Thursday, with Utah's fingers crossed that no further damage will be found).

One can't think Williams' willingness to stick around increases any when he sees his big men leave him hanging time after time in pick-and-roll coverage, or when he watches Jefferson trapped in the corner by a double team three times a game, or when Kyrylo Fesenko takes more sick days than a European bureaucrat and shows up fifteen minutes before tipoff.

Perhaps the biggest statement about Utah's flagging fortunes, however, can be found in the simple fact that the Jazz played a home game against the NBA's best team … and it was only the second-biggest basketball game in the state. Just down the highway, Provo was in a State of Jimmergency after BYU's Jimmer Fredette tore up previously undefeated San Diego State; the team that normally owns this city was a mere afterthought on this night.

Obviously, it's a stretch to put all this on Al Jefferson. He's the second-best player on a playoff team, and the Jazz would certainly be worse without him. Yet one can't avoid the whiff of disappointment about his performance. The Jazz were hoping they'd get the All-Star-caliber big man that would both complement Williams and convince him to stick around.

Instead they got … decent. And, it appears, descent.

Ranking the coach of the year candidates:

1. Gregg Popovich, Spurs: San Antonio has a league-leading 39-7 record, despite the fact that Tim Duncan is posting one of his worst statistical seasons of his career.

2. Tom Thibodeau, Bulls: TNT's Charles Barkley had nothing but good things to say about Thibodeau: "[Thibodeau] has done a great job. He holds [his team] accountable. He's benched some of his best players because they weren't playing well or they weren't playing great defense. That's one reason a lot of teams in the NBA struggle: Coaches ain't coaching their teams. They're intimidated by their players. You've got to coach your players, because the coach gets fired if they don't do their job. "

3. Monty Williams, Hornets: Chris Paul started the season unhappy, and Williams is a rookie coach. Halfway through the season, New Orleans is riding a 10-game winning streak and is 15 games over .500.

4. Vinny Del Negro, Clippers: The Clippers lost in Dallas on Tuesday night, but VDN has turned them from laughingstocks to a team other teams have to play their best against to defeat.

5. (tie) Doc Rivers, Celtics, and Doug Collins, Sixers: Despite the games missed this season by Rajon Rondo and Kevin Garnett, all Rivers has done is guide the Celtics to the top record in the East and the second-best overall mark in the league.

Collins has transformed the Sixers from a 3-13 club to a team that is 20-25 and thinking playoffs.

O.J. Mayo, Grizzlies: After shooting 55.6 percent in contributing to three straight Grizz wins, O.J. went scoreless in Newark, missing four shots in 17 minutes of action in a 93-88 loss that prevented Memphis from reaching the elusive .500 mark.

Jimmer Fredette is the best scorer in the world!!Midnight via Echofon

"Mo Speights was our ace of Speights tonight."

• Play of the Night: Durant's winner

The Heat should expect to play without Chris Bosh for the foreseeable future. The high ankle sprain diagnosis the Heat feared has become a reality, and that could mean it will take weeks before Bosh graces the court again.

This injury is the most adversity the Heat have faced since the doldrums of November, when they went 5-7 over a 12-game stretch.

Bosh is the most irreplaceable player on the team. He is the Heat's fulcrum in offensive sets. The Heat play terribly when LeBron James and Dwyane Wade fend for themselves.

But don't just take it from us.

Heat coach Erik Spoelstra called Bosh the team's "crutch" and their "facilitator." Wade referred to him as he and James' "relief." LeBron admitted Bosh's injury "takes the chemistry out and it takes the rhythm out of the team."

And the numbers don't lie either. The Heat have missed him desperately.

According to Alok Pattani of ESPN Stats & Information, the Heat score six more points and allow three fewer points per 48 minutes with Bosh on the court compared to when he sits.

• Read the full story from Haberstroh 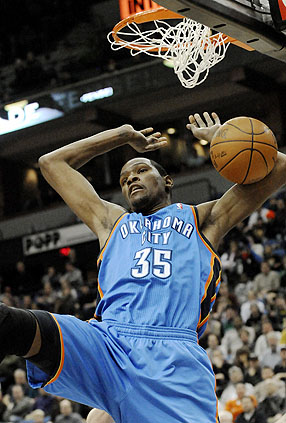 AP Photo/Jim Mone
Kevin Durant exploded for 47 points and 18 rebounds. According to Elias, the only other active player who has ever equaled or exceeded those totals of points and rebounds in an NBA game is Shaquille O'Neal, who did it three times.

• Jrue Holiday handed out 11 assists for the 76ers in their 107-94 win at Toronto. Holiday leads second-year NBA players with an average of 6.6 assists per game this season. Last season, Holiday's 3.8 assists-per-game average ranked him sixth among NBA rookies. Stephen Curry, Tyreke Evans, Brandon Jennings, Darren Collison and Jonny Flynn had higher averages as rookies in 2009-10 than Holiday.