Two days removed from an exciting win over the East's second-best team, the Knicks' loss in Orlando is a tough pill to swallow.

New York overpowered the Magic early on, outscoring Orlando 37-15 in the second quarter and appearing poised for a second straight victory (and the first back-to-back wins in the Carmelo Anthony era). However, the Knicks melted down at the end of the third quarter, allowing Orlando to score unanswered on three straight possessions in both the third and fourth quarters, and ultimately fell to the Magic 116-110.

There was some fiery play, as the teams combined for five technical fouls, but New York's offense lacked a spark.

The Knicks followed up a meager shooting night Sunday in South Beach (43.8 percent effective field goal percentage) with a pathetic 41.3 percent in Orlando. And at the center of the problem is Anthony.

In four games for New York, Melo has done well by traditional statistics, averaging 27 points per game. However, advanced stats show him to be a drain on the offense.

Anthony has taken 93 field goal attempts to net 108 points, a poor ratio. And while the league average in true shooting percentage is usually around 54 percent, Anthony has a TS% of 50.2 percent for New York. Compare those numbers to Chauncey Billups, who has scored 93 points on only 49 shots, with a 65.5 TS% in the blue and orange, and it's clear who has been the better Knick thus far.

There was a lot of support around the league for the Anthony deal, but there also was a sizable contingent who felt he didn't address the team's needs. Prior to the big trade, New York had a potent offense and a weak defense, and needed depth at point guard and center. And while the Knicks added offensive firepower in Melo, they never addressed some of their biggest weaknesses before the trade deadline.

And even though he's one of the leading scorers in the league, Anthony's style of scoring might not mesh with the Knicks' offense. Melo scores primarily using isolations and post-ups, and doesn't possess an accurate 3-point shot -- all of which are antithetical to Mike D'Antoni's offense.

Given the Knicks' poor efficiency since the trade, it appears some of the worries might be vindicated.

Proponents of the Anthony move spoke well of his high-volume game -- especially his ability to create with the ball -- and its positive effect in the fourth quarter of close games.

But down the stretch against the Magic, Anthony missed all three of his field goal attempts, turned the ball over once and managed only four points.

New York was hoping its deadline deal would put it among the East's best teams. But, despite besting the Heat in Miami, it doesn't look like the Knicks are there -- at least, not yet.

While blowing a possible win against Orlando might have been tough for Knicks fans, being saddled with an ill-fitted Anthony for the long haul might be an even bigger pill to swallow.

Read more from Kurylo at the TrueHoop Network blog Knickerblogger.net »

2. Lakers Rebound On The Boards

It took nearly three quarters before the Lakers finally looked like the Lakers at the Target Center. After tying the game at 58 with a 15-footer, Kobe Bryant drilled a 3-pointer and set up Lamar Odom at the rim with a sick fake shot attempt. The flood gates proceeded to open as expected when the two-time defending champions face a team waiting for Ricky Rubio to save them. Between the 4:38 mark of the third quarter and 6:26 in the fourth, the Lakers enjoyed a 22-5 run. Order was restored and the inevitable conclusion was met.

Before that, however, the Lakers were colder than any of the "Minnesota weather" jokes inevitably tossed around while shots refused to fall.

The Lakers were 22.7 percent from the field to cap the first quarter. A half closed at a robust 30.4 percent (14-for-46) clip, with Andrew Bynum's 4-for-8 showing the primary reason numbers were even that high. Several of our Twitter followers bemoaned the long jumpers, but there were a fair amount of misses from point blank as well.

Beyond the shots taken at the free throw line (9-for-10), no distance or spot on the floor failed to frustrate the Lakers. Of the 40 points accumulated, 26 required a second chance.

Which gets into the reason the Lakers eventually came out ahead with the offense taking so long to click:

4. Bibby In Need Of Defense

The Heat are signing free agent Mike Bibby, who was bought out by the Washington Wizards on Monday, which begs the question:

The 32-year-old point guard has developed a reputation as a matador who voluntarily ushers opposing point guards into the lane. Sometimes it looks like he's defending whilst waist-deep in a pool.

So how could the Heat, with their fourth-ranked defensive efficiency, possibly be interested in a defender with the mobility of a cardboard cutout?

• Read the rest from Haberstroh at ESPN.com's Heat Index »

Jose Calderon, Raptors: Calderon did his best CP3 impression, logging game highs in points (22, on 70 percent shooting) and assists (16) while the real Chris Paul was held to just seven points on 30 percent shooting and five dimes in as many minutes (38) in a 96-90 win for Les Raps.

Richard Hamilton, Pistons: Maybe he would have been better off staying on the bench. In his first game back from John Kuester's doghouse, Rip shot just 4-for-17 (23.5 percent) from the field, marking his lowest regular-season field goal percentage with at least 15 shots attempted in almost six years, according to Elias.

Thank you everyone for the Get Wells I'm ok just a sprain10:30 p.m. ET via Twitter for iPhone

-- Mavs center Tyson Chandler, putting Dallas fans' minds at ease after limping off the court toward the end of the first half of a 101-93 win in Philadelphia.

"We have to do better with our brains."

-- San Antonio's Manu Ginobili, on the Tony Parker-less Spurs' loss to the Grizzlies.

• Jason Kidd had 13 points, 13 assists, 10 rebounds and no turnovers against the 76ers on Tuesday night. Kidd's performance marked the 49th triple-double by an NBA player over the past two regular seasons, but only the second during that span without a turnover. The other was by Pau Gasol against Portland on Nov. 7, 2010.

• Danny Granger was 16-for-16 from the foul line Tuesday night against the Warriors. It was the second time in his NBA career that Granger attempted at least 15 free throws in a game and made every one of them; he went 17-for-17 from the charity stripe on Dec. 17, 2008, coincidentally against Golden State. Here's one that surprised us: Granger's boss, Larry Bird, who had an 88.6 career free throw percentage, never had a 15-for-15 or better game from the foul line in his NBA career. Bird's best? 14-for-14.

• The Magic and Knicks combined for 97 free throw attempts Tuesday night, the most in an NBA game since Feb. 15, 2007, when the Cavaliers and Lakers had that exact same total. 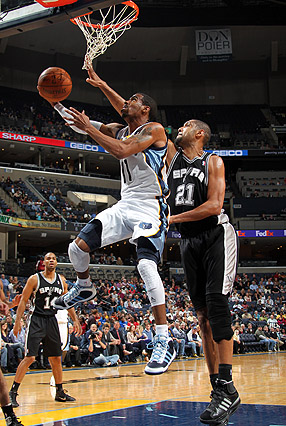 9. Watch Out For Dallas

It's time to talk about Dallas again.

Last season, you'll recall, they accomplished a similar feat, winning 15 straight games after the break against a soft stretch of schedule while my Power Rankings frowned in disapproval.

This year looks a little different. While the Mavs are only seventh in the current rankings, they're within a point of third. Look at the "rating" and not the ranking, and you'll see there are essentially seven teams as near-equals at the top, followed by a chasm separating No. 7 Dallas from No. 8 Philadelphia and the rest of the league.

• Read the rest of Hollinger's PER Diem