1. Hawks Take Bloom Off Rose With Dose Of D

ATLANTA -- When the Atlanta Hawks acquired guard Kirk Hinrich at the trade deadline, coach Larry Drew had a vision for how his skills might allow his team to defend against elite guards. On Wednesday, his plan went to perfection.

Atlanta used the combination of Hinrich and Joe Johnson to shut down Chicago star Derrick Rose, enabling the Hawks to rally from a 19-point deficit and stun the Bulls 83-80.

"Joe will be matched up at times with some of the point guards," said Drew, who normally used Johnson to defend point guards with any offensive ability whatsoever due to Mike Bibby's shortcomings. "But now [Hinrich] gives me the luxury of matching [Johnson] up late. Whereas matching up early, it can wear him down."

Witness this game, in which Hinrich did all the dirty work through three quarters, but the bigger Johnson took over down the stretch run. With fresh legs, Johnson denied Rose off the ball and forced a turnover as Carlos Boozer attempted a handoff, and went in for a dunk that put Atlanta up three with 20.6 seconds remaining; out of timeouts, Chicago's two desperation tries for a game-tying 3-pointer came up empty.

"When I noticed him taking the ball out," Johnson said, "I wanted to deny him, because I knew he'd throw it in and get a handoff. I just wanted to deny him the best I could and make Boozer throw a tough pass."

For the night, Rose finished 5-for-21 with six turnovers, with an especially ghastly second-half line: 1-of-11, two points, six turnovers. In holding the Bulls to 80 points, it continued an Atlanta defensive renaissance that coincides exactly with the trade for Hinrich. In four games since acquiring him, the Hawks have allowed just 85.5 points per contest; three of them were on the road and three were against winning teams.

"They did a good job on him," Bulls coach Tom Thibodeau said. "I thought he had some shots he normally makes that he couldn't put down."

Of course, defense is not a one-man operation. And even without ace shot-blocker Josh Smith, Hinrich and Johnson had plenty of help behind them while surrendering a meager 30 points after intermission. The most notable came from Marvin Williams, who moved up to the 4 spot during crunch time and snuffed what appeared to be a wide-open Rose layup with a spectacular rejection.

"I was just trying to make a play," Williams said. "I was telling these guys, it was a split second from going the other way, he probably could have put me in the basket. He's an explosive jumper, but that didn't cross my mind; I just went after it."

Johnson struggled offensively, shooting 5-for-20, but contributed nine assists -- helped by the fact that Al Horford was unstoppable in the second half. He scored 22 points after the break and matched his career-high with 31 for the night, including his first 3-pointer of the season as the Hawks started clawing back in the third quarter.

"When he shot that 3 in the corner," Johnson said, "I knew he was rolling. So I just wanted to make sure I got him the ball in the sweet spots."

For Chicago, a few mental errors will likely stand out. Thibodeau thought the team began getting "loose" late in the first half, with a botched two-on-one on its final possession being the standout play.

"Those have to be layups," Thibodeau said. A poor delivery from Luol Deng and a sloppy finish from Rose resulted in a Keystone Kops rim-checked dunk try, and instead of leading by 20 at the break the Bulls were up 17.

In the third quarter, the Bulls -- who normally play as hard as any team in the league -- were guilty of inexcusable lethargy when Williams went in for a transition layup over Deng and missed. No other Bulls ran down the court, leaving Horford with an easy follow dunk.

"It disappointed me," Thibodeau said. "For the most part we hustle and we play hard. [But] I was concerned when we had the lead, because I didn't like how we were playing."

In the final minute, Thibodeau was upset with Joakim Noah's over-the-back foul 90 feet from the basket that sent Horford to the line. Horford made one free throw to tie the game at 79.

"We beat ourselves at the end," Thibodeau said. "Their energy picked up as the game went on. And our frustration, because we weren't scoring, impacted our defense."

Indeed, Chicago still led by four with 1:20 left before a Williams 3, Noah's over-the-back foul, a botched pick-and-roll coverage that gave Horford a dunk and Johnson's steal and bucket put the Hawks on top.

The result, though frustrating for the Bulls, was one of the most riveting 83-80 games you'll ever see. And, because of the continued impressive defensive results, it was also a game that adds a further dose of legitimacy to Atlanta's post-trade aspirations of challenging the Eastern Conference's top four teams.

NEW YORK -- Some prankster stole Toney Douglas' underwear from his locker, forcing him to conduct his postgame interview wearing only a towel.

Douglas fingered Amare Stoudemire as the most likely suspect, and if Douglas' hunch is correct, Stoudemire should be sentenced to a week of fetching the same Krispy Kreme donuts Douglas had to fetch back when he was a rookie.

Because this was a night on which Douglas absolutely undressed the opposing point guard, Chris Paul, who is supposedly in line to take over the playmaking duties in New York by the time fall 2012 rolls around.

That was simply the naked truth, and forcing Douglas to travel home commando was just plain wrong.

Douglas is well aware of the speculation surrounding the future of Paul, who was a part of the now-famous toast at Carmelo Anthony's wedding in which the guests raised their glasses to the possibility of Stoudemire, Anthony and Paul someday taking their collective talents together to the corner of 33rd and Eighth. "I don't really get into all that," Douglas said. "I knew Chris since we were in high school, and he's a great player. I don't know what's going to happen in 2012, but I just continue to become a better basketball player and keep working every day. And whatever Coach asks me to do, I'm going to do."

What coach Mike D'Antoni specifically asked Douglas to do Wednesday was to begin playing with an ego, to stop being too deferential to Stoudemire and Anthony, and to take a cue from the injured player he was replacing, Chauncey Billups and be an offensive initiator if necessary instead of an offensive facilitator.

The message sunk in. Douglas was aggressive from the start in scoring New York's first five points of the game and finishing with 24 points on 10-for-13 shooting, including 4-for-6 on 3-pointers, while helping hold Paul to just four points on 2-for-7 shooting as the Knicks defeated New Orleans 107-88 on Wednesday night.

Al Horford, Hawks: He showed the nimbleness of a 2-guard in driving to the hoop. He even hounded Derrick Rose on D. In the end, 31 points and 16 rebounds helped deliver an 83-80 win that had the ATL fans going wild.

Charlotte' s playoff stock: The current East No. 9 seed has a 30.2 percent chance to make the playoffs, according to John Hollinger's playoff odds. After the Cats endured a 120-80 loss to Denver, putting the milk money on the Pacers seems like a safe call.

We took Channing to a sporting good store yesterday, We had him buy a cup lol.. We don't want KG getting any more ideas lol11 a.m. ET via Echofon

"Al would probably never admit it, but I think it's personal. … You always want to bring it against your former [teammates], and he does it every time."

PLAY OF THE NIGHT

• Rondo feeds Pierce for the dunk on Frye

DUNK OF THE NIGHT 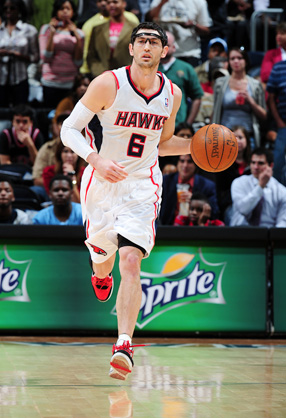 The next time you watch DeMarcus Cousins play, try analyzing him using just one word at a time. It's an exercise I do when evaluating players. Here's what I came up with when I watched him in person Feb. 23 against Orlando: gigantic, lazy, gifted, infantile, physical, unafraid, vision, anticipation, lost, clueless, different, agile. My guess is you would come up with similar words after observing him.

Unlike many big men who enter the league, Cousins is already loaded with an NBA body and game. His talent jumps off the tape, stat sheets and court. Unfortunately, so do his flaws, especially the problem "between the ears." Every player I've spoken to this season told me Cousins has the worst body language and facial expressions of any NBA player they've ever seen. And I was able to see many of the same things when I watched him up close.

So the question is: Can he fix his faults so he can become a real star in this league, or will he be held back by his immaturity?

Kevin Love scored 20 points and grabbed 20 rebounds as the Timberwolves topped the Pistons at The Palace. Love has netted 20 or more points and pulled down double-digit rebounds in each of his past nine road games. That's the longest streak of its kind for any NBA player since Tim Duncan had nine straight road games with at least 20 points and ten or more rebounds in the spring of 2002.