LOS ANGELES -- Ever since the Denver debacle a week earlier, Kobe Bryant has been shooting at an efficiency well above his career percentage. The Los Angeles Lakers are literally defending their home court, having allowed only one opponent to score more than 90 points in seven games at Staples Center. The Lakers have won the rebounding decision in all 10 games. Yet somehow when you add all that up it's not very impressive.

Even after beating the Memphis Grizzlies on Sunday night, the Lakers (6-4) have only the seventh-best winning percentage in the Western Conference.

"We're doing OK," Bryant said. "There's a lot of bright spots there. Once we round into form a little bit better we'll be much improved."

Most of the excuses are valid ones. They lost two of the four games they played while Andrew Bynum was suspended. They're adapting to new offensive and defensive systems, with the learning curve slowed by minimal amounts of practice time while playing the NBA's busiest schedule in the first two weeks. They've been without their energy guy, Josh McRoberts, for the past four games.

They'll get better. But how much? That's the mystery of this team. One thing they won't be is more explosive. Coach Mike Brown called Sunday's frustrating victory, which the Lakers won in spite of their 27 turnovers, a "controlled, methodical game … a game we should excel at." A 90-82 final score is the way he prefers it, and it might be all the Lakers are capable of.

On Friday, after beating the Golden State Warriors in a similar manner, Bryant said: "You're going to have a lot of nights like that with us. We're not a transition team by any means. You're not going to see some of the fluidity that you see from other ballclubs. We're a very slow team, so you're not going to see fast-break points. A lot of games are going to be ugly."

Of late, the beauty is to be found in Bryant's stat line. After that unsightly 6-for-28 shooting night in Denver, he has made 51 of his past 103 shots (just a shade under 50 percent). His 26 points Sunday were actually a comedown from his three previous outings of 37, 30 and 39 points. He has 25 assists in that stretch as well.

And he's doing it with a torn ligament in his right wrist.

Assistant coach Chuck Person suggested that Kobe try shooting with his elbow elevated to relieve the pressure on his wrist. Kobe quickly adapted.

One thing I learned that might be the reason why Bryant has shot so much despite the damaged wrist: The trouble for him comes when the wrist is dangling by his side, not when it's being flexed. When it's at rest, the blood pools and the swelling increases. That would explain why, in the first week of the season, his hand looked more swollen before the Knicks game, after a practice day, than it did immediately after a game against the Jazz two days earlier. During one dead-ball Friday night, Bryant flicked several practice shots against the backboard, just to keep the wrist loose.

Bryant established from the outset of training camp that he wanted to show something to everyone who thinks he's over the hill, and he is demonstrating that he still has it, to a large degree. He can still get to his favorite spots (if not always to the rim) and can still get his shot off. His game against Golden State -- 39 points on 13-for-28 shooting with seven assists, while playing 41 minutes on the second night of a back-to-back -- goes down as one of the best performances of the early season.

They have yet to win a road game in three tries (at Sacramento, Denver and Portland). Their past three victories have come against teams with a combined record of 7-17.

Their sub-elite look has coincided with Bynum's most recent efforts, when he went from making Lakers fans abandon thoughts of Dwight Howard to once again checking salary matches in the Trade Machine. Bynum has shot 8-for-23 over the past two games. I kept track of the Lakers' scoring efficiency on possessions when Bynum touched the ball versus those in which he didn't on those two nights, and it has been roughly the same. So he hasn't been giving them the inside advantage on offense that he did in his first three games back from the suspension.

Bryant has made it clear that he'll still shoot as much as ever, and it's incumbent on anyone else who wants shots to show why they merit them.

Bynum and Pau Gasol were cited by Memphis coach Lionel Hollins as the biggest reasons his team shot 41 percent Sunday.

"When they have both bigs in the game, that's when they control the game," Hollins said.

2. Still The Giving Season For Lakers

The Lakers really need to stop turning the ball over.

It's been a problem for the purple and gold throughout their opening nine games, and Sunday night was no exception. Given how meticulous Mike Brown is, I have to imagine that his team was warned to be careful with the ball against the Grizzlies. After all, Memphis entered this game with two players (Mike Conley, Tony Allen) in the top 10 for steals, and Marc Gasol is among the top 10 for legit big men. Thus, it doesn't take a basketball genius to realize that this is an opponent capable of making hay through disruption. Instead, the Lakers made the work even easier for them.

It's one thing to turn the ball over, but it's quite another when the majority of gaffes are avoidable. In the Lakers' case, they coughed up plenty of the latter variety. Whether through traveling, careless "home run" passes or over-dribbling, the Lakers turned the ball over 27 times in all. Even worse than the ensuing empty possessions was Memphis' ability to capitalize. Twenty-four points were scored off turnovers, and 31 on fast-break situations. That's an unacceptable tally in any setting, but when you consider the fact that Memphis only scored 82 points on 40.9 percent, it really drives home how big a favor the Lakers did their hapless opponents by giving them the ball.

3. Mavs Could Use Effective Beaubois

Dallas Mavericks forward Dirk Nowitzki said he doesn't have a problem with Rodrigue Beaubois' defense, but harped on his skills running the offense.

"He's got to work on his decision-making, I think we all know that, coming off pick-and-rolls, making the right plays, seeing the floor -- that's sometimes problems for him," Nowitzki said. "But I like when he plays hard, he makes stuff happen, and I like when he's aggressive. Sometimes he has to find a better mix of driving and shooting and finding the open guy, but we need him."

And Beaubois understands that. He lost all confidence during his short stint last season once he finally returned from foot surgery, and he didn't play a second during the championship run. A second foot surgery last season coupled with the lockout hampered his progress this season. But Beaubois knows he's needed, and he's working to make a positive impact.

"I still need to keep pushing myself, to keep working, because I have to find my sensation back," Beaubois said. "All those layups, normally I make those. Now I take it like it is important for me to have minutes to get my rhythm back and help the team to win, because right now I am still working to get my game back."

Check out more from ESPN Dallas »

4. Miami's Bench On The Rise

If you haven't been paying close attention to the Miami Heat in the early going, you probably have asked the following questions in order:

Who is this Norris Cole kid? And who is this Terrel Harris kid? And wait -- what happened to the Heat's terrible bench from last season?

As Heat coach Erik Spoelstra promised in training camp, the Heat were going to look different this season. But it was hard to take his statement seriously, considering that they didn't make a splash in free agency and their biggest signing was a 33-year-old role player who would bolster a crowded wing position.

But this much is clear: The Heat do look different this season, and it's not just their up-tempo playing style. The Heat lost in the NBA Finals to the Dallas Mavericks primarily because LeBron James was not LeBron James. But the series also hinged on the fact that the Mavs had strong depth beyond their trio of Dirk Nowitzki, Tyson Chandler and Jason Kidd; the Heat had Juwan Howard.

Check out more from the Heat Index »

LaMarcus Aldridge, Blazers: Bouncing back from a beatdown in Phoenix, Aldridge led the Blazers with 28 points, eight rebounds, four assists and four steals to help Portland stay perfect at the Rose Garden with a 98-78 win over the Cavs.

"It's frustrating. It's sickening. Embarrassing. They booed us; we deserved it. I don't know what to say."

-- Wizards forward Andray Blatche, after his team fell to 0-8 with a rout at the hands of the Timberwolves. 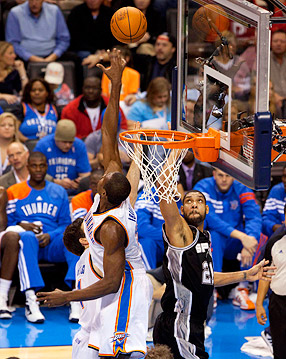 Richard Rowe-US PRESSWIRE
Getting the ball over Thunder power forward Serge Ibaka is quite a reach, which Tim Duncan found out again here during Sunday's loss to OKC.

So, I think the second unit might be just fine.

Powered by 53 bench points, Oklahoma City used a 37-21 third quarter to run the Spurs out of The Peake 108-96 and became the first team to sweep its back-to-back-to-back. Three nights, three wins.

Thunder coach Scott Brooks wasn't about to get too excited about handling the Spurs, though. He was happy to win, but wanted to keep it in perspective.

"You have to put things in proper perspective. [Manu] Ginobili is a big part of their team and he didn't play," Brooks said. "A few other guys only played a few minutes, and this was their fourth game in five nights."

Check out more from the Daily Thunder »

Rubio
Ricky Rubio recorded 14 assists in the Timberwolves' 93-72 victory at Washington. It was Rubio's eighth NBA game, and his assist total tied the all-time single-game high for that early in a player's career. Three other players posted 14 assists in one of their first eight games, but not the players you're probably expecting. They were Ernie DiGregorio of the Buffalo Braves in his NBA debut in 1973, Bryan Warrick of the Washington Bullets in 1982 and Greg Grant of the Suns in 1989.

Oscar Robertson first posted as many as 14 assists in the 20th game of his NBA career. Neither Magic Johnson nor John Stockton tallied 14 assists in one game until early in their second seasons in the NBA (Magic in his 80th game, Stockton in his 86th).

Check out more from Elias »