1. Another Day, Another Bear Victim

The Memphis Grizzlies continued their tear through the cream of the NBA crop, grinding down the visiting Los Angeles Clippers en route to a 94-85 win. The Grizzlies have won eight of their past 10, including victories over the Lakers, Thunder, Heat, Mavericks and now the Clippers, a possible first-round playoff matchup.

Marc Gasol was Memphis' man in the middle of everything. The Grizzlies leaned on the big Spaniard's point-center skills all night, repeatedly finding him rolling to the rim off pick-and-rolls, or hitting him in the high post, from where he is one of the great passers in the league. When he didn't finish himself, Gasol picked out teammates stationed around the perimeter and zipped pinpoint passes to cutters at the rim, racking up seven assists (to go with 18 points and eight boards) as he unraveled a threadbare Clipper defense. 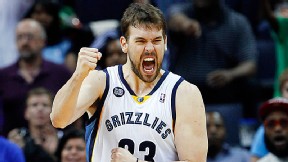 That Gasol had more assists than Chris Paul (who finished with just six) is a testament to how well he and the Grizzlies gummed up the Clippers' predictable pick-and-roll attack. Aside from a couple of sparkling moments, the Clippers and Paul looked dull from the outset, unwilling or unable to match the Grizzlies' activity and intensity on either end.

Even Blake Griffin, who played an efficient but understated game (19 points, 9-for-14 FGs) seemed stuck in low gear. He failed to make an impact on the boards (six rebounds) and went to the line just three times.

Certainly no one will be overjoyed to see Memphis in the playoffs, though they have yet to establish a real rhythm between their centerpieces and continue to bring Zach Randolph -- their best player in the playoffs last season -- off the bench.

But while Randolph (10 points 12 rebounds) rounds, or slims, into shape, stashing him on the second unit has created one of the most consistent attacks in the NBA. And it was Memphis' ability to keep the pressure on throughout the game that finally overwhelmed the Clippers in the second half.

The Grizzlies got 31 points from their bench, including an outstanding two-way performance from O.J. Mayo (13 points, 5 assists), while the Clippers played three fewer players and mustered only 15 points from their reserves.

With its physical, athletic style, Memphis will be a brutal matchup for anyone it faces in the playoffs. But its hiccup at the end of this game, when the Clippers came dangerously close to making things interesting in the final minute, raises doubts about its status as a contender.

Key roles still need some defining. For instance, Mike Conley needs to be the one making the decisions in crunch time. Questions remain. But over the past two weeks, the Grizzlies have come up with nearly all the answers.

MVP: Kenneth Faried was simply electrifying from start to finish. His 27 points and 17 rebounds set career highs, and even more impressive is the fact he did it all in just 24 minutes. The rookie known as the Manimal was as good as advertised and is looking more and more like the steal of the 2011 NBA draft.

X factor: Denver was dominant in just about every category, but the rebounding edge is what really sticks out. The Nuggets outrebounded the visiting Warriors 60-27, which gives you an idea of why this one was so lopsided from beginning to end.

LVP: Take your pick. The Warriors' whole starting lineup was atrocious, but a good portion of the blame has to fall on their best player, David Lee. Only two nights removed from guiding the Warriors to a blowout win over the same Nuggets, Lee looked like a completely different player in Denver. He had more personal fouls (4) than rebounds (3) and was little more than a prop in the Kenneth Faried Show most of the night.

MVP: Markieff Morris. The rookie had 21 points on 9-of-15 shooting to go along with 6 rebounds. He led a 66-point scoring explosion from the Phoenix bench and played strong defense when matched up on Kevin Love.

X factor: An invisible 25-10. Kevin Love got his stats but played a terrible game. He never got going from beyond the arc (1-6), had four turnovers and looked uncomfortable on both ends of the floor.

What's the Word? Defenseless. The Wolves were slack on the defensive end and allowed the Suns to shoot 57 percent from the floor. The Suns made an insane number of open jumpers, as the Wolves were slow in transition and rotation.

-- Ryan Weisart, Valley Of The Suns

MVP: Pau Gasol. The Lakers' supporting cast may have made clutch shots late, but Gasol (25 points, nine rebounds) deserves the bulk of the credit. Without Kobe Bryant, the responsibility falls on him to carry the purple and gold.

Defining moment: With 1:54 remaining, Gasol blocked Chris Kaman's jumper, Ramon Sessions secured the rebound and Metta World Peace nailed a 3-pointer to regain the lead. From then on, the Lakers never trailed.

X factor: The Lakers' defense to close out the game. They held the Hornets to five points over the last 3½ minutes, eluding the rotational mistakes that plagued them in the first three quarters.

MVP: Marc Gasol. He was a bit flat-footed in terms of keeping his man off the offensive boards at times, but overall Gasol killed. Eighteen points on 12 shots, 8 rebounds, 7 assists and 2 blocks. Gasol even forced a key late CP3 turnover.

X-Factor: Role players. While the Clippers struggled to get even mediocre scoring production out of Randy Foye, Caron Butler and Nick Young, Memphis got good offensive production from Marreese Speights and solid hustle from Quincy Pondexter.

That was ... unexpected: Memphis turnovers in their first two games against the Clips led to their demise, as the Clippers feasted on fast breaks. Tonight MEM didn't fix the turnover problems, yet this time managed to better contain LAC's offense and get a win.

That was ... aggressive: Russell Westbrook looked determined to put his stamp on the game and on Brandon Jennings' brain from the start -- 26 points, 7 rebounds and enough attitude to manage a pro wrestler.

Defining moment: Kevin Durant left Carlos Delfino in the dust with a mean crossover and headed to the hoop for a vicious, uncontested dunk in the first. Soon it would be an 18-point game and the Thunder would lead by double digits the rest of the way.

X factor: The Thunder owned the paint thanks to both a size and speed advantage over an overmatched Bucks squad. They made more free throws (23-for-25) than the Bucks attempted (9-for-13) as Milwaukee was left with no other recourse but to foul inside.

MVP: George Hill. Filling in at point guard for injured starter Darren Collison, Hill had one of his best lines of the year: 18 points on 9 shots with 7 boards, 4 assists, 0 turnovers and 7-for-7 from the line. Is there a better backup PG in the NBA?

X factor: The Pacers appeared to have a comfortable win. Until Linas Kleiza showed up. He hit two 3s late and finished with 18 points in 16 minutes and sparked a Toronto bench that gave Indiana a lot of anxiety late.

That was ... as expected. At home, the Pacers should handle a team like the Raptors easily. And despite some lackluster second-half defense, Indiana's starters still played well enough down the stretch to ensure an easy victory.

MVP: Jordan Crawford scored 20 points on 7-for-12 shooting in only 21 minutes, 23 seconds of action. Crawford only took two 3-pointers and made one, so majority of his points came from attacking rim.

X factor: The Wizards' giving out 10-day contracts. James Singleton and Cartier Martin, both players on 10-day contracts for Washington, combined for 37 points and 18 rebounds. I think they'll both be around for 10 more.

Defining Moment: When Jordan Crawford hit a 19-foot jump shot at 11:30, first quarter. It gave the Wizards the 2-0 lead, and this one was a wrap after that.

MVP: In the absence of Dwight Howard (sore back) and Hedo Turkoglu (facial fracture), Jameer Nelson stepped up as the Magic's primary playmaker and carved up the Pistons' defense with his scoring and passing (18 points, 9 assists).

X-Factor: After Detroit shot 56.6 percent from the floor against Orlando on April 3, the Magic tightened up defensively this time around. With Orlando's defense playing on a string all night long, the Pistons shot 40.5 percent.

That Was ... Payback: With the win, the Magic avoided an embarrassing season series sweep at the hands of Detroit. And Orlando did so in emphatic fashion, combining defense with red-hot 3-point shooting (15-for-28) to earn the victory.

Kenneth Faried, Nuggets: Seems like just yesterday he was springing all over the court for NCAA Cinderella Morehead State. The Nuggets rookie lit up Golden State for 27 points and 17 boards, making 12 of 18 shots in a 123-84 win.

The Warriors: Hands down, men down. The 39-point margin of defeat to Denver wasn't the only glaring number. The Warriors were outrebounded by the Nuggets by a 60-27 margin.

Nothing saddens your heart more than seeing a tweet from somebody that's supposed to be texting you back.

"If you get too far from reality, things can go bad for you. The reality is, that [Thunder] team's at a different level than we are. And we're trying to get to that level someday."

-- Bucks coach Scott Skiles, after his team absorbed a 109-89 defeat by Oklahoma City. 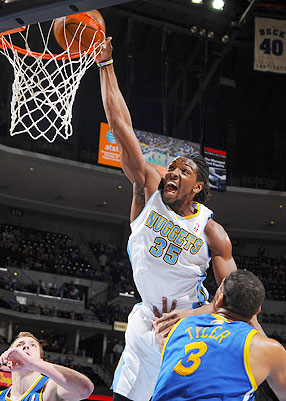 Garrett W. Ellwood/Getty Images
Nuggets rookie Kenneth Faried sends one home over Jeremy Tyler during a 123-84 blowout of the Warriors. Faried finished with 27 points and 17 rebounds, both career highs.

Andre Miller had 12 assists in the Nuggets' win against the Warriors on Monday night, giving him 7,398 for his career and vaulting him passed Maurice Cheeks for 10th place on the NBA's all-time list. The NBA player who has scored the most field goals with an assist from Miller is Carmelo Anthony, who made 502 shots from the field coming off helpers from Miller.

MVP: Collectively, the Jazz's front line was the difference in the game that snapped the Spurs' win streak at 11, but individually the MVP has to go to Devin Harris. Harris was aggressive, using his speed to get to the free throw line 12 times and hitting big shots in the fourth quarter.

LVP: Stephen Jackson has been valuable as a secondary playmaker. But absent their Big Three (resting), the Spurs found out they cannot lean on Jackson to create efficiently as the primary option.

Defining Moment: In the final minutes of the fourth quarter, Tiago Splitter found a cutting Danny Green with a beautiful behind-the-back pass, only to have it turned away. It was the perfect representation of the Jazz's ownership of the paint with a 50-38 rebounding edge and 13 blocks.

MVP: Goran Dragic, and it wasn't even close. A game-high 22 points on 8-for-14 shooting, seven assists, three steals and two turnovers in the 40 minutes of play. Dragic's energy on offense overmatched Portland's backcourt.

LVP: Portland backup guard Nolan Smith's biggest contributions were two turnovers and three fouls in 16 minutes, missing his three shot attempts. A reminder: Smith is the point guard of the future if the team misses out on both Deron Williams and Dragic this summer.

That was ... worse than it looks. Both teams put up respectable numbers to end the game, but started a combined 7-for-23 from the floor. Portland hovered around the 30 percent from the field heading into the third quarter and finished just under 40 percent for the night.