The Kevin O'Connor Rebuilding Master Class gave a free seminar to the entire NBA on Tuesday night. "How to Rebuild and Stay Relevant" is the working title and the Phoenix Suns provided a telling contrast to prove his thesis.

It was all on display: The results of fleecing trade partners, keeping salaries manageable, mixing affordable veterans with promising young players, maintaining a winning culture and building for the future.

On the vet side, Al Jefferson (18 points, 16 rebounds) returns to the playoffs for the first time since his rookie year in Boston. It was fitting that he scored eight straight points down the stretch to put the game away and couldn't keep the smile off his face when he was finally taken out of the game to a standing ovation.

Paul Millsap moved over to the small forward spot and abused the Suns with 26 points, 15 rebounds, four assists, three steals and a block. In his vacated power forward spot was the other side of the O'Connor rebuilding equation: Derrick Favors, with five blocks in the first half to go along with his totals of 13 points and 11 rebounds. Gordon Hayward quietly had a career-high eight assists to go along with 11 points. 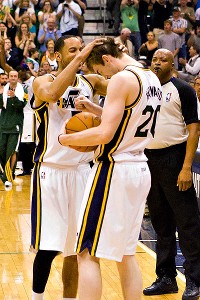 The genius of O'Connor is the fuzzy math surrounding the rest of the roster. I'm confident no one could have guessed that castaways Josh Howard and Jamaal Tinsley would be playing crucial minutes for a playoff-contending Utah Jazz team. No one even knew starter DeMarre Carroll. Those in the Jazz front office deserve a lot of credit for creating a winning environment when many in the fan base were loudly aboard Team Tank.

When asked when the Jazz players first thought they would make the playoffs, Favors responded quickly: "Game 1."

Said Jazz coach Ty Corbin, "We need everybody that we have. The guys have been great all year supporting each other, making the right plays. I've changed the lineups and rotations at different times, the guys just come out and play and make the most of the minutes on the floor. We're going to need that to continue to get better."

The future is much murkier on the other end of the court. Steve Nash is a free agent this summer and has spoken openly about evaluating all of his options, while the rest of the roster is mired in big contracts without the talent to back it up.

"Phoenix feels like my team," Nash said. "It has the feel -- and you don't always get it in professional sports -- but it feels like a high school or college team. I spent so many years here and had so much success here. It's a special place for me, no question.

"I'd like to play three years. I feel great and I don't feel like there's any reason why I can't continue to play at a high level and contribute the way I've been. I want to keep going.

It will be a shame if this is the way the Nash era in Phoenix ends -- not with a bang, but a wimper.

Thanks to O'Connor's plan, the Jazz are in full throat.

MVP: Paul Millsap had 26 points, 15 rebounds, 4 assists, 3 steals and a block, and was plus-21. He abused the Suns from the small forward position rather than his usual 4-spot as Hakim Warrick, et al, were powerless.

That was … a shame: The Steve Nash era in Phoenix is likely over, with only a farewell appearance at home Wednesday against their would-have-been first-round opponents, the Spurs. He deserved better.

LVP: After promoting himself as a major player for Phoenix this season, Marcin Gortat was invisible in the most important game of the year. Twelve rebounds against just two points wasn't enough.

MVP: Joe Johnson. Johnson played like a veteran, notching 28 points and connecting on a fadeaway prayer late in the game that banked in and sealed the win for Atlanta. With home-court advantage on the line, Johnson showed his versatility, poise and ability to feed off a crowd.

X factor: Jeff Teague had 18 points on 7-for-12 shooting and connected on all six of his free throws. When Johnson and Josh Smith play to their season averages, a big game from a guy like Teague can change Atlanta from a marginal team to a pretty tough team to beat.

Defining moment: With less than three minutes left the Clippers cut into a double-digit Hawk lead and forced Atlanta to use 23 seconds of a shot clock. Johnson watched a 30-foot prayer bank in, and the Hawks went up seven. In this business we call that a "dagger."

MVP: Sasha Pavlovic scored 12 of his 16 points in the fourth quarter as the Celtics outscored the Heat 28-16 down the stretch. He also had five rebounds and four assists. The win kept the Celtics' chances at getting home-court advantage in the first round of the playoffs against the Atlanta Hawks alive.

LVP: Ryan Hollins played 24 remarkably hollow minutes, missing all three of his shots, all four of his free throws and getting just three rebounds.

MVP: Kevin Durant didn't play in the fourth quarter but he scored 32 points on his way to trying to securing the scoring title. He was just 7-for-19 from the field after starting 5-for-8 but he finished 15-for-16 from the free-throw line.

X factor: The Thunder's bench. OKC's reserves had just 12 points heading into the final quarter and then scored 36 points. Daequan Cook had all 19 of his points in the fourth, when he shot 4-for-5 from 3-point territory.

MVP: Marco Belinelli scored 23 points on 14 shots, including the game-winner, with 4 assists, 4 rebounds and 3 steals. He was steady as can be until the end.

Defining moment: After Gustavo Ayon blocked Charles Jenkins' runner with five seconds left, Greivis Vasquez pushed the ball ahead to Belinelli, whose game-winning layup was goaltended by Chris Wright. Way too easy for the Hornets.

That was … close: How many Warriors fans were upset that Wright's two offensive rebounds gave Golden State what could've been the last shot and then glad he goaltended? The tanking Warriors greatly improved their odds of keeping their draft pick, which would go to Utah if it is outside the top seven.

Playoff-clinching Jazz: Utah shut down any last hope for a Suns playoff run, using a supersized frontcourt of Al Jefferson, Derrick Favors and Paul Millsap (a combined 57 points), to pound Phoenix into submission and clinch the final playoff spot in the West.

Im solid. Feeling good. Appreciate y'all for checking on me!!

"Paul's playing right now. Maybe when he finds out who is not playing, he won't."

-- Doc Rivers, in pregame of the Celtics' victory over the Heat, after announcing that Ray Allen, Kevin Garnett and Rajon Rondo would be sitting. 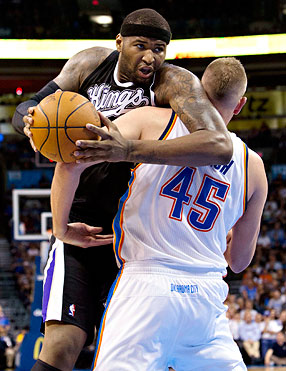 Blake Griffin had 36 points and eight rebounds and Chris Paul chipped in with 34 points and five rebounds, but it wasn't enough as the Los Angeles Clippers dropped a 109-102 decision to the Hawks in Atlanta on Tuesday night. Since the 1990-91 season, only four other teams have lost a game in regulation despite having multiple players record at least 34 points and five rebounds: Cleveland vs. Denver on Jan. 12, 1991 (Larry Nance and Brad Daugherty), Atlanta vs. Charlotte on April 17, 1993 (Dominique Wilkins and Kevin Willis), the Lakers vs. Portland on April 13, 2003 (Shaquille O'Neal and Kobe Bryant) and Miami vs. Chicago on March 14, 2012 (LeBron James and Dwyane Wade).

It was only the third time in the Clippers' franchise history that two players each recorded at least 34 points and five rebounds in the same game. Dominique Wilkins and Ron Harper did it on March 8, 1994 and Michael Brooks and Tom Chambers did it while the team was located in San Diego on April 15, 1982.