ATLANTA -- The Hawks were 90 percent of the way to being 90 percent there.

Up 11, at home, late in the third quarter against a reeling Celtics team missing its two backcourt stars, Atlanta was closing in on a 2-0 series lead ... an advantage that leads to a series win 94 percent of the time, historically.

And then, a dramatic reversal. The Hawks lost the lead and then their star forward and then the game, and now they're hanging on for dear life in the series after Boston rallied for an 87-80 win in Game 2. Game 3 will be Friday in Boston.

But hold off on the talk about the game for a minute, because a potentially much bigger issue for the rest of this series is the state of Josh Smith. The Atlanta forward again filled the stat sheet with 16 points, 12 rebounds and five assists but left the game with a sprained left knee with 4:20 to go and the Hawks trailing by two.

It appeared the knee had been bothering him for much of the fourth quarter, especially on a layup try at the 5:14 mark that he missed, but Smith may have aggravated whatever injury he had in a collision with Kevin Garnett just before he checked out. Television replays showed his knee giving a bit after Garnett bumped into him with 4:40 left, and 20 seconds later he was in the locker room and done for the night. 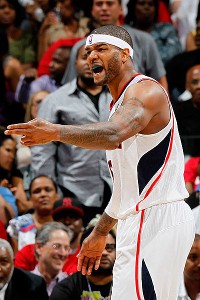 This one isn't in Rose-Shumpert territory -- Smith walked off the court and left the arena under his own power -- but even a lesser injury would likely eliminate Smith for the rest of this series, and that in turn would effectively end any threat Atlanta posed to the Celtics.

Certainly that was the case in this game, as an Atlanta side that floundered through much of the fourth went completely off the rails once Smith checked out.

And Paul Pierce took care of the rest. Calling this a throwback performance damns with faint praise; this was one of the best games of a fabulous career. Pierce had 36 points, 14 rebounds and four assists while being asked to carry a Boston offense that was missing Rajon Rondo and sharpshooter Ray Allen.

"The only way we were going to win a game like that without Ray and Rondo," said Celtics coach Doc Rivers, "was if Paul had a game like this."

The veteran forward played 44 minutes but had enough in the tank to rise up for a fast-break dunk in the fourth quarter and then put the Hawks away with a dagger transition 3 ... and then capped his night by Tebowing at midcourt after making two free throws.

(This gesture was more family-friendly than the last famous one he made in this arena, when he was fined for flashing gang signs at Atlanta's Al Horford in the heated 2008 series between these two clubs.)

However, the real damage had been done earlier. Atlanta was up 11 with under three minutes to go in the third quarter, a lead that could have been even bigger had the Hawks' two best players not each blown wide-open breakaways -- Smith missed a showboat reverse dunk try in the first quarter and Johnson blew a clean transition layup early in the third.

The Celtics cut the lead to five when Doc Rivers decided to skip the final pit stop: While the Hawks went to their bench to start the fourth quarter, he left Pierce, Avery Bradley and Garnett on the floor. While Johnson, Jeff Teague and Smith rested to start the period -- Johnson and Teague for 2:23, Smith for 1:36 -- Boston seized the opening and tied the game, holding Atlanta scoreless for nearly four minutes to start the fourth.

It was a calculated gamble on the part of Rivers, but with two days off before Friday's Game 2 and Boston having granted its players plenty of rest in the final two weeks of the season, it paid off huge. Both Pierce and Garnett had enough spring to push Boston through the fourth, while Atlanta was burned by treating it too much like a regular-season game.

It wasn't the only factor. Boston visibly turned up its defensive pressure, to the point where the Hawks had trouble just initiating their sets. Little-used Marquis Daniels joined Garnett, Pierce, Bradley and Mickael Pietrus in a small-ball lineup that hounded the Hawks into a 4-of-19, six-turnover stinker of a quarter. With Atlanta missing centers Zaza Pachulia, Horford and, for the final four minutes, Smith, the Hawks couldn't punish the Celtics' small look.

"We tried to play small," Hawks coach Larry Drew said, "to match up with them and try to open the floor a little bit, but we didn't have that low-post presence that we needed."

Moreover, Johnson couldn't take advantage either. One wonders if the task of guarding Pierce most of the night wore him out; while Pierce had the luxury of guarding less threatening Hawks (such as Marvin Williams, who shot 1-for-6 in 21 impact-free minutes), Johnson's fourth quarter included two turnovers in a crucial three-possessions stretch and just one made basket. While his final line wasn't bad (7-of-17, 22 points), he seemed tentative to pull the trigger the entire night and lapsed into overdribbling at times.

Regardless, once his co-star Smith went out, the Hawks were at a huge disadvantage. And that disadvantage will persist throughout the series if Smith's knee keeps him out. Horford won't be back 'til the next round at the earliest (if there is one) and Pachulia is now targeting Game 5, perhaps optimistically. Atlanta faces the prospect of needing to win in Boston with Jason Collins, Ivan Johnson and Erick Dampier (remember him?) as its only bigs.

If they'd managed to take a 2-0 lead to Beantown as well, the Hawks might feel a little better about their chances.

Now? It just feels like a wasted opportunity, and one they won't get back without Smith.

Defining Moment: Philadelphia unleashed hell in the third. Galvanized by a series of dunks so remarkable I won't squander space trying to capture them here, it shot 68 percent, held the Bulls to a paltry 25 percent clip, outrebounded the home team 14-5 and beat them on the break 11-0. When the dust cleared, and with the laws of physics restored, the Sixers had taken the period 36-14 and opened up a 14-point lead they'd only build on.

MVP: Pregame, much of the conversation centered around a point guard who wasn't playing. Postgame, it will shift to one who did. Jrue Holiday, the third-year guard whose halting progress has sometimes frustrated Sixers fans, was tremendous: He hit 11 of his first 12 shots and finished with 26 points and six assists.

That was ... the beginning of the end? Most in the prognosticating business expected the Bulls, who more than held their own in Rose's first 27 sick days, to grind by the Sixers and likely their second-round opponent before the hole where their superstar used to go would be exposed and in turn expose them. We might have to move that timetable up by a few weeks.

MVP: Paul Pierce didn't have his best shooting night, but he doggedly fought his way to 36 points and 14 rebounds to carry the Celtics offensively into an unlikely comeback win.

LVP(s): The Hawks' putrid bench coughed up an 11-point lead at the end of the third quarter and the start of the fourth. Larry Drew is going to have to stagger his starters' rest to mask his reserves' offensive incoherence.

X factor: Josh Smith sprained his knee in the second half and the Hawks are facing the possibility of playing the rest of this already wearying series without their most productive player to this point.

MVP: Kobe Bryant scored 38 points and also chipped in four rebounds and two assists. His scoring was the catalyst for building up the Lakers' lead and he made several key plays late in the game to keep the Nuggets at bay when they made their final push.

X factor: Ty Lawson poured in 25 points and handed out seven assists to keep the Nuggets close. His aggressive drives in the second half provided a spark for his team and put the Lakers back on their heels. Without Lawson's strong play, the Lakers win this game going away.

Defining Moment: With 2:18 left in the game and the Nuggets down by four, Kenneth Faried received a pass ahead of the defense in a position to score but bobbled the ball for a turnover. Bryant took the ball the other way, and after drawing the defense, he made a slick pass to Andrew Bynum for the dunk plus the foul. The Nuggets never recovered.

Paul Pierce, Celtics: With Rajon Rondo out, the captain came to the rescue, finishing with 36 points, 14 rebounds, four assists and one act of Tebowing after hitting a game-clinching 3-pointer in the fourth quarter of the Celtics' series-tying victory.

Rose-less Bulls They were looking good up until halftime, but things got ugly thereafter. With their star point guard staring longingly from a suite up top, the Bulls mustered only 14 third-quarter points en route to a series-changing rout at the hands of the 8th-seeded Sixers.

@ChelseaVPeretti when ur dead n gone. Do u want a hologram to do ur stand up n stuff?

Steve Mitchell-US PRESSWIRE
The United Center gave Derrick Rose a standing ovation as he presented the game ball to officials pregame, but the MVP couldn't hide his discomfort with wearing street clothes in Chicago's Game 2.

Kobe Bryant, 33 years old, scored 38 points on Tuesday in the Lakers' win over the Nuggets. The only other Lakers players to score that many points in a playoff game at age 33 or older are Kareem Abdul-Jabbar (three times in the 1980 playoffs, including twice in the NBA Finals) and Wilt Chamberlain (45 in Game 6 the 1970 Finals against the Knicks).

And coupled with Pierce's 36-point game, it's the first time two players age 33 or older have scored 35 points or more on the same day in the NBA playoffs.