MEMPHIS, Tenn. -- Seventy-two hours is a long time for a team to stew.

"I haven't slept in two days," O.J. Mayo said. "It's just tough to watch that fourth quarter over and over, three or four times."

Mayo is either an insomniac or a masochist to voluntarily relive the Memphis Grizzlies' Game 1 loss to the Los Angeles Clippers, a game in which the Grizzlies led by 27 points in the second half, but fell in one of the biggest meltdowns in NBA playoff history.

Mayo, apparently, watched the fourth quarter of Game 1 on an endless loop. Other players and coaches needed to bury the horror show -- watching the final moments only as part of a clinical film session.

But during that grieving, the Grizzlies did some important work. They restored their identity as a team, and that collective introspection delivered a 105-98 victory over the Clippers. The series is now tied 1-1 as the two teams head west for Game 3 on Saturday afternoon.

Tony Allen took time away from managing his Twitter feed to peruse the final box score at his locker. The defensive ace noted that the win Wednesday night was vintage Grizzlies.

"Look, [the Clippers] had 21 turnovers and we had 16 offensive rebounds," Allen said. "Bump and grind."

The playoffs are often a parade of anomalies, Game 1 between the Grizzlies and Clippers being a classic example. But in Game 2, the Grizzlies doubled down on their assets as a team, and rode those strengths to a win.

Over the course of the season, the Grizzlies ranked third in offensive rebounding, and they grabbed 16 of them Wednesday night.

"When you outrebound a team like we did, and get 16 offensive rebounds, it's huge," Grizzlies coach Lionel Hollins said. "We had 18 second-chance points."

The Grizzlies led the league in forcing turnovers this season. Despite facing a Clippers team that has been very protective of the ball all season, Memphis lured Los Angeles into 21 miscues in Game 2.

True to form, Clippers point guard Chris Paul claimed sole responsibility for his team's carelessness with the ball, despite a game-high 29 points on 10-for-17 shooting from the floor.

"That was a huge difference, and it's my fault," Paul said. "I turned the ball over way too much. I've got to figure out how to get them off of me. Some of [the turnovers] were just bad passes and stuff like that, but when you're getting in the lane and it's the playoffs, [the officials] are going to let you play, and they're going to let them grab and hold and stuff like that."

Paul's characterization of the Grizzlies rings familiar to those who've watched Memphis this season. Those forced turnovers and offensive rebounds are a function of the Grizzlies' brutal brand of basketball, one that values pressure and physicality. Their prolific Game 1 notwithstanding, the Grizzlies know they can't beat opponents from the perimeter, and neither of their big men have natural speed or athleticism.

For Memphis to win, it needs to engage in guerrilla tactics on both ends of the floor. It needs to nibble at the margins of the game where possessions can be added (offensive glass) and taken away (forced turnovers) with sheer effort.

"Grit-and-grind basketball," Rudy Gay said. "Those were some of the things we didn't do last game in the second half."

Though he's a proud member of Team Grit 'n' Grind, Gay brought a full range of skills and grace to Game 2, finishing with 21 points on 9-for-13 shooting, along with 5 rebounds and 3 steals.

"[Gay] had a few plays there where he just jumps over you at the free throw line," Clippers coach Vinny Del Negro said. "They were diving him a lot down the middle. He's long and he shoots it high -- it's hard to get to it. He got to his sweet spots a little too easy."

Gay didn't participate in the Grizzlies' Cinderella run last postseason, when Memphis toppled top-seeded San Antonio and grew together as a cohesive unit. There was some discussion before the season that reinserting Gay into the bloodstream of the upstart Grizzlies might actually have an adverse effect on team chemistry. If there was any lingering doubt, Game 2 disproved this theory.

Gay is an intuitive, versatile offensive player in the half court -- athletic enough to beat you one-on-one and intelligent enough to sniff out mismatches. In Game 2, he shot over Bobby Simmons, dragged the smaller Nick Young to the post, leaked out in transition (which finished in a nifty 180 reverse slam), exploited DeAndre Jordan on a mismatch and made a terrific read -- cutting to the basket to receive a high-low pass from Marc Gasol to build the Memphis lead to six at the end of the third quarter.

"Every time down, I'm trying to figure out how I can be effective," Gay said. "I knew my big fella would find me if I made a good, strong cut. I did that and it worked."

Mayo nearly matched Gay's totals. Memphis' supersub chipped in 20 points, held down the point guard position in the second unit and hit the Grizzlies' only two 3-pointers of the night.

Memphis was able to absorb an off night from the outside -- it certainly wasn't its first -- because it rediscovered its predatory style of play.

"We attacked," Gay said. "That's how you slow teams down."

MVP: The Grizzlies featured a balanced attack, with six guys in double figures, but O.J. Mayo hit big shots in the second half on his way to 20 points and a team-high +11. More importantly, his defensive pressure on Chris Paul set the tone down the stretch.

That was … more like it: Game 1 did not lack excitement, but this was the type of game everyone was looking forward to between these two evenly matched teams. Memphis pulled away at the end, but this was physical and full of big plays.

X factor: After being outplayed by the Clippers subs in Game 1, the Grizzlies' bench was able to maintain the intensity set by the starters. Led by Mayo and Marreese Speights, they were the key to tying up the series.

MVP: Danny Granger (26 points, nine rebounds) and Roy Hibbert (18 points, 10 rebounds) were the "co-MVPs" of Game 3. Granger and Hibbert combined for 21 of the Pacers' 32 points in another game-changing third quarter for Indiana.

LVP: Outside of Glen Davis and J.J. Redick, no one else for the Magic had much success against the Pacers. So go ahead and hand out "LVPs" to guys like Ryan Anderson, Jameer Nelson, among others. They stunk.

Defining moment: It's no secret that Indiana was one of the best third-quarter teams in the NBA during the regular season. The Pacers proved that in Games 2 and 3, putting both games out of reach with dominant third quarters.

MVP: As advertised, Tony Parker (18/9/4 in just 27 minutes) controlled the game and got in the paint at will. After big talk about needing to play physically in Game 2, the Jazz appeared more likely to give Parker a shoulder rub than a forearm.

That was … atrocious: After a miserable, turnover-plagued first quarter, the Jazz followed up with an 11-point second quarter, including nearly seven minutes without scoring a point. It didn't get better, either: Utah finished 31 percent from the field. Meanwhile, San Antonio hit 10 of 22 3-pointers.

X factor: It probably wouldn't have done much to stop the Spurs juggernaut, but Jazz big man Derrick Favors only played nine meaningful minutes, despite leading a comeback that cut the San Antonio lead to five. The "Free Derrick Favors" movement is in full swing.

Mayo
O.J. Mayo, Grizzlies: Somebody had to make sure déjà vu was expunged from the Grizzlies' house. Mayo made sure the Grizzlies didn't lose their fourth-quarter lead, scoring 10 of his 20 points in the last 12 minutes of the 105-98 win over the Clippers.

No Jazz self-preservation: On the bright side, at least it wasn't the 42-point beatdown MJ issued the Jazz in the 1998 NBA Finals. Brighter still, at least they didn't let Tony Parker -- who protested to Gregg Popovich to leave him in, he's only 29 -- to get in a full workout. Yup, the Jazz will take that kind of solace from a 114-83 loss in San Antonio.

Jerry Lawler is recreating the Andy Kaufman stunt with a "fan" dressed in a Clippers uniform. Invokes "Lawler's Law."

"It wasn't like I had a closed fist and just punched through the glass. It was nothing like that. I just walked by, wanted to make some noise, swung my arm, hit the fire extinguisher door and didn't even realize I was cut at all until Josh Harrellson told me I was cut."


-- Amare Stoudemire, describing how he hurt his hand. 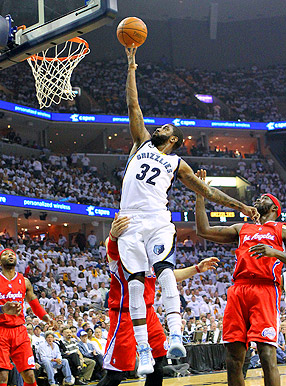 Los Angeles Clippers guard Chris Paul recorded game-high totals in points (29), assists (6), steals (5) and turnovers (5) against the Memphis Grizzlies on Wednesday night. There have been only two other instances over the past two seasons in which a player led both teams (either outright or tied) in all four of those categories in one playoff game. Paul himself did it against the Los Angeles Lakers in the opening round last year, as did Russell Westbrook versus the Grizzlies in the 2011 conference semifinals.