NEW YORK -- When the New York Knicks formulated the plan for this roster, even if it was plan E or F, the idea was this:

Put a great wing scorer capable of carrying the offense next to an aggressive power forward who could run pick-and-rolls and rebound and have a strong defensive center that would protect the paint behind them.

That, after years of losing and saving cap space, was a reimagined blueprint that was supposed to make them contenders in 2012.

Sunday afternoon those items on the checklist did, indeed, align and beat the Miami Heat, the team that had pulled off their own dream roster plan, in an entertaining affair at Madison Square Garden. For the first time in more than 10 years, Knicks fans got to celebrate a playoff win when Dwyane Wade missed the final shot and the Knicks took an 89-87 Game 4 win. 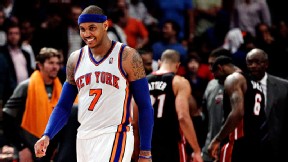 History may say the Knicks' situation remains untenable -- no team has ever come back from down 3-0 to win a series -- and the Heat still look like their Phoenix program (non-Suns variety) of going-to-ashes-so-you-can-get-franchise-pillars strategy will ultimately have worked better than the Knicks'.

But New York will always have this one: Their duo of Carmelo Anthony and Amare Stoudemire got the best of LeBron James and Wade in a playoff game.

More specifically, Stoudemire has at least shed the goat horns that came along with the stitches and staples that held his left hand together after he smashed the infamous fire extinguisher case in Miami last week. Surprising some of his teammates -- and plenty of fans who saw the gory picture of his mangled palm he tweeted on Saturday -- Stoudemire put a big wrap on his hand and played through it.

After scoring 20 points and grabbing 10 rebounds and helping rescue the team from giving up its third consecutive sweep, the relief was all over Stoudemire's face. With the tabloids all over him -- he'd been branded a "Bloody Idiot" and a "Glass Hole" on the back pages -- and some fans at the Garden booing his introduction, it wasn't hard to identify why he rushed back to the court.

"After losing Game 2 it wasn't a great feeling so my reaction definitely wasn't the best reaction, due to that I was out Game 3," Stoudemire said.

"I wanted to do whatever I could to heal up as fast as I could, mainly for my teammates and secondly for the fans who actually stuck with me and understood the frustration. A lot of people didn't know what exactly what happened. Some thought I actually had a fist and punched through the glass, and that wasn't the case at all."

His presence was worth more than his stats. Because he was in the game and effective on offense, the Heat altered their normal defensive assignments. That left Shane Battier on Anthony for most of the second half and not James, who had been the designated Anthony defender down the stretch throughout the series and even during the regular season.

Heat coach Erik Spoelstra declined to give a firm answer to the strategy, but Stoudemire played a role in the decision and Anthony prospered. Shooting 34 percent and scoring mostly on volume throughout the series, Anthony finally took the role of the playoff-game-tilting star that the Knicks traded half their roster for.

He scored 41 points on 29 shots, the kind of ratio that works quite well, including 12 points in the fourth as he repeatedly scored over Battier. Once when the Heat were forced to double-team him, something not usually required when James has the assignment, Anthony swung the ball, leading to a key 3-pointer by Mike Bibby.

"It was a great feeling especially to win at the Garden," Anthony said. "Despite all the stuff that is going on with our team, for us to come together and win this playoff game is a great feeling."

The "stuff" included Stoudemire's extinguisher incident, Iman Shumpert's blown knee in Game 1 and, on Sunday, Baron Davis dislocating his knee cap and facing a long recovery. With all that they still were able to beat the Heat, who had looked certain to sweep after double-digit wins in the first three games.

Wade had 11 points in the fourth quarter and James hit a 3-pointer and converted a strong 3-point play late that kept the Heat in it. But overall the Heat played their worst offensive game of the series (Chandler played a role in that, New York outscored the Heat by nine points with him in the game), Wade missed seven free throws and James took only seven shots in the second half.

James and Wade had been two of the best in the league in close-out games on the road. James had won six of his previous seven and averaged 30.7 points a game in them. Wade averaged 28.8 points in those situations. This time, though, they gave their opposite numbers on the Knicks' chances to steal, and that's what they did.

"They played a desperate game," Wade said. "We give them credit for not giving up."

MVP: Spencer Hawes, who has broken 20 points in an NBA game exactly as many times as I have over the past two regular seasons, has now turned the trick in consecutive games. The free agent to be matched his regular-season high of 17 points in the first half and finished with 22, adding eight rebounds and three blocks for good measure.

X factor: Most reasonable men, if mired in a 1-for-14 start from the floor in one of the biggest games of their career, would stop shooting the ball. Jrue Holiday is not a reasonable man. Undeterred by his brutal beginning, Holiday hit six of his last nine -- including back-to-back fourth quarter 3-pointers that pushed a one-point Philadelphia lead to seven -- to finish with an unlikely 20-point night. His eight rebounds and six dimes helped too.

That was … depressing: Reduced to a shoddy facsimile of itself by a run of some of the worst postseason injury luck in memory -- the catalyst of its offense at home and the beating heart of its defense in a boot -- if Chicago looked like a team running on fumes on Sunday, it was because it was. "Everything ends badly," an old line goes, "otherwise it wouldn't end at all." It's a fitting epitaph for the 2012 Bulls, a team that'll spend a long offseason wondering what might have been.

MVP: After struggling with his shot for the first three games, Carmelo Anthony got it going in Game 4 by scoring 41 points on 15-of-29 shooting.

X factor: Amare Stoudemire, playing with a gruesome cut on his left hand, sported a large bandage on his left hand and came up with 20 points and 10 rebounds in 34 minutes.

Defining moment: Veteran Baron Davis suffered a dislocated right knee cap late in the third quarter and had to be taken off on a stretcher. The crowd at Madison Square Garden gave him a standing ovation, and the Knicks seemed to rally behind their fallen teammate. They completed a 19-2 run to take the lead and then held on in the fourth quarter.

LVP: Joe Johnson, the Hawks' best offensive player, needed to step up in a big way after the Celtics came out hot early on. He did not accept the challenge and had only eight field goal attempts in 29 minutes.

X factor: Much like the Hawks did in Game 1, the Celtics came out hard and bombarded the Hawks with offense. After building a substantial lead, the Celtics kept their foot on the gas pedal and the Hawks never had a chance.

MVP: Missed shots and turnovers have never deterred Kobe Bryant, and this game was no exception. The superstar hit the boards, fed teammates for open looks and made timely shots in the second half to keep the Lakers within striking distance.

X factor: The Lakers controlled the game from the interior, snatching 19 offensive rebounds and contesting countless shots at the rim to force misses from the Nuggets at point-blank range.

Carmelo Anthony, Knicks: Scoring 41 points while making more than 50 percent (15-for-29) from the field? That's the kind of volume shooting that can deliver a playoff win. Probably a safe bet that we'll see more LeBron James covering Melo in Game 5.

Hawks' missed opportunities: Remember Atlanta's glory days of … last week? The Hawks were up 1-0 on the Celtics, and Rajon Rondo had just been suspended for Game 2. Three games later, even the return of Al Horford was not enough to save the Hawks from falling into a 3-1 hole. Zach Harper can't trust 'em.

Who did visiting players stare down after hitting big shots before Spike Lee got his courtside seats?

"He's a good player. He's a great player honestly, and he gave them the spark that they needed." 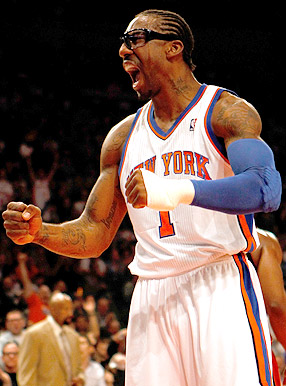 Jeff Zelevansky/Getty Images
With his injured left hand taped, Amare Stoudemire returned to action in Game 4 with 20 points and 10 rebounds in the Knicks' win over the Heat.

With the score tied at 86-86, it was Ramon Sessions who gave the Los Angeles Lakers the lead they would never relinquish on a 3-point field goal (assisted by Pau Gasol) with 48.1 seconds remaining. In the last four postseasons (2009-2012), the Lakers have made five go-ahead field goals in the final minute of either the fourth quarter or overtime in a playoff game, and none were by Kobe Bryant. Derek Fisher made the Lakers' only last-minute go-ahead field goal during the 2009 playoffs. Fisher, Gasol and the man then known as Ron Artest each made one in 2010.