LOS ANGELES -- With pith and frustration, Memphis Grizzlies coach Lionel Hollins summed up what transpired in the closing minutes and overtime period of the Clippers' 101-97 victory in Game 4.

"Chris Paul." Hollins said. "The guy made three straight jumpers, got to the basket, got fouled. I mean, come on. Chris Paul won the game for them down the stretch."

You've seen this flick before. The Clippers found themselves under duress against a resilient Memphis team that erased a late deficit in regulation. In danger of handing home court in the series back to the Grizzlies, the Clippers hopped on Paul's back and eked out a win.

We learned nothing new about Paul in the process. He has officially turned Clippers basketball into a predictable four-act drama. He's the cop who always solves the crime and the doc who never loses the patient. Shame on him for exhausting the capacity to surprise.

But before closing time, back when Paul was only 5-for-17 from the field and the contest was being fought in the trenches, the Clippers got something they previously hadn't in the series:

Get all the news and commentary on the Grizzlies-Clippers matchup on ESPN.com's matchup page.

"We knew it was going to come," Paul said. "He was unbelievable for us tonight."

Griffin hadn't played poorly in this series by any stretch, but there was an unfamiliar reticence to his presence on the floor over the first three games, something mechanical about his play.

On Monday night, that all changed on the offensive end. Griffin called for the ball -- and not just the trademark index-pointing-in-the-air call for an alley-oop, but the big-paw-in-the-air call a big man makes when he wants to be fed in heaping portions.

"I thought Blake was aggressive early," Hollins said. "He started to just attack and use his quickness and strength."

For the first time in the series, Griffin projected a confidence over the duration of a full game that he could dominate any matchup. He scored a game-high 30 points on 10-for-15 shooting from the field and worked his way to the stripe for 17 free throw attempts (converting 10).

Griffin was a more predatory player in Game 4. He muscled his way to his spots more promptly and was quick to attack with his spin move, step through and devastating up-and-under. He still maintained his patience and monitored the presence of Marc Gasol -- who had stymied Griffin in the series by mirroring him on every possession. But given the slightest of openings, Griffin would burst into the paint.

Griffin was quick to credit a more fluid offense for additional room to work in the half court. With his teammates buzzing around the perimeter, the Memphis defenders had to make more difficult help decisions, which gave Griffin easier looks at the basket.

"From side to side, we moved the ball," Griffin said. "When I caught it in the post, everyone was cutting and in motion. When we do that, it's a lot tougher to guard because they can't turn their back and focus in on one thing."

An elite big man must be a crafty multitasker if he wants to control the game. As much as Griffin's 30 points pleased Paul and Clippers coach Vinny Del Negro, they felt Griffin's willingness to distribute the ball strategically when the help defense arrived was crucial to taking advantage of that motion.

"I thought his seven assists were huge for us," Del Negro said. "When he has seven assists, that's a really good sign because when he's going to touch the ball, he has to make plays for other guys, too. And he did."

A big man like Griffin can create, but he also needs the guidance of the offense to help initiate many of those opportunities. Credit Paul, Del Negro and Mo Williams for orchestrating a more Griffin-friendly offense.

For example, rather than letting the Grizzlies' defense dig in, the Clippers ran early drag screens up top that put the Memphis big men on their heels. Griffin would slip into the paint before his man would have time to establish defensive position. The Clippers have never set the league's sturdiest screens, but they made a more concerted effort to take out Griffin's man on the baseline, which allowed Griffin to catch the ball closer to the hoop with more space.

"Every time [Griffin] catches the ball, he has 14 other guys on the bench yelling, 'Go, go, go!'" Paul said. "He does a great job of picking his spots."

With Paul taking a breather in the fourth quarter and the Clippers trailing, Griffin and Williams worked the two-man game to perfection. First, Griffin dished out a smart assist when Williams had a baseline route to the basket. Then, on the next offensive possession, the tandem danced in a beautiful side pick-and-roll as Griffin caught the pass, took a single dribble, then flushed the ball home for the and-1 that gave the Clippers the lead. About a minute later, Williams fed Griffin on the left block. When the help came, Griffin kicked the ball out to the weak side (while falling to the floor), where Nick Young was waiting to drain a 3-pointer.

Griffin has become one of the NBA's most scrutinized talents and there was plenty of anticipation to see how his confrontation style would play in the postseason. In the second quarter, Randolph fouled Griffin beneath the basket, then aggressively bumped him. Observers had been waiting to see whether Griffin could maintain his composure in a physical series, but as Randolph was whistled for a technical foul, Griffin could only smirk. Gotcha.

One game doesn't even begin to lay the foundation for the kind of career Griffin aspires to. The Clippers lead 3-1 in the series, but still need to close the Grizzlies out. They'll need Griffin to do so, and to advance further.

"I have a lot to prove," Griffin said. "My game has a lot of improvement left to be made, and I don't ever want to feel like I don't have anything to prove. This year, especially, I felt like there has really been a drive inside of me. I need to step up and step up in a bigger way and step up on a team that actually wins games."

Actual wins traditionally result from tangible contributions. Griffin's teammates and coach were effusive about his production in Game 4. Now they and Griffin will see whether that nascent success can translate into sustained excellence -- and more actual wins.

MVP: Chris Paul was uncharacteristically unclutch at the end of regulation, not even getting off a shot on the final possession. But like he has for most of this series, he wound up as the difference-maker by game's end. He finished with 27 points, nine rebounds and seven assists, including four huge jumpers in overtime.

That was … wild: Not only did the drama exceed 48 regulation minutes, but players on both sides were diving on the floor, flying out of bounds, and making plays through physical defense throughout the game. It was just another entertaining battle in the playoffs' best series.

X factor: Memphis' 47-36 edge on the glass. Once again, the Grizzlies dominated the rebounding battle, and it allowed them to hang around and force overtime, despite foul trouble for Tony Allen, Zach Randolph and Marc Gasol.

MVP: It's tough to argue that anyone deserves the MVP for the Spurs after a near collapse, but Manu Ginobili got his 3-point shot back in this one en route to 17 points and had some general Manu-ness going, making plays at big times for San Antonio. It's still a sour nomination for MVP, though.

Defining moment: In a game that felt like two completely different contests, one in which the Spurs controlled and another in which the Jazz dominated, the defining moment was the one that put an end to it all. Down just four with less than a minute left, a Jazz turnover led to a wide-open Ginobili layup on the other end that effectively ended any comeback.

That was … different: Game 4 had a similar rhythm to Game 3 of this series, when it was generally close but never felt like the Jazz had done enough to be a favorite in the contest. Then the Spurs seemed to break it open, only to have their bench give away some of the lead. Then the San Antonio starters came in and nearly gave the rest of it back. And yet, the Spurs still held on to win.

Paul
Chris Paul, Clippers: Paul scored eight of his 27 points in a swish-buckling overtime performance, and the Clippers moved a step closer to a showdown with the Spurs with a 101-97 win over the Griz. CP3's next act can't come soon enough, with this slugfest of a series resuming Wednesday.

Jazz from long range: For all the credit due them for a hard-nosed, spirited comeback, the Jazz would make things a lot easier on themselves if they hit a 3-pointer. Yes, the Jazz did not make a single trey in 13 attempts from the floor Monday. Yes, Jeff Hornacek is not walking through that door.

The best thing about watching Chris Paul 50+ times this season is that he does this exact thing 50+ times. 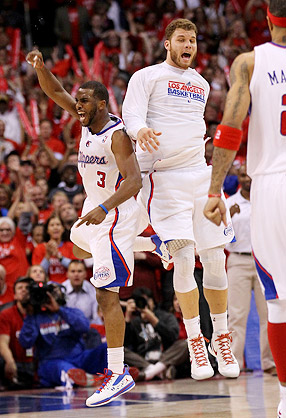 Manu Ginobili came off the bench to score a team-high 17 points; among the starters, Tim Duncan and Tony Parker led with 11 points apiece. The Spurs' victory was the first in the NBA's past 591 playoff games in which no starter on the winning team scored as many as 12 points. The previous team to win a playoff game in that manner? Gregg Popovich's Spurs, of course. Back on April 30, 2005, the Spurs topped the Nuggets, 86-78, in Game 3 of a first-round series in Denver, with Duncan leading the starters with -- you guessed it -- 11 points, and Ginobili coming off the bench for a game-high 32.